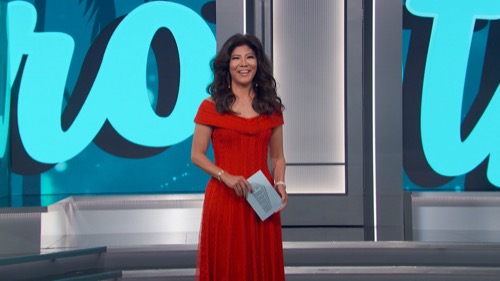 Tonight’s episode begins with the twist finally ending and Michael’s heart is racing, the door opens and he sees Alyssa, and know that one of the Leftovers is gone. Monte can’t believe Joseph is gone, he was his number one in the game. Turner is thrilled to see that Jasmine is gone. Kyle is happy to still be in the game but worried there might be backlash for throwing the Leftovers under the bus. They are the final eight now. Taylor walks away from the group in tears, Joseph is gone and she can’t even hug him. Michael walks into the room where she is, she sucks up her feelings and goes back into the living room. The outsiders say that they felt like it was a punishment outdoors. Michael says everything was the same inside, but they had drinks and good food.

Alyssa tells Michael that Joseph went out fighting, but she is so overwhelmed in the house that she can’t think straight.

Turner realizes that he is aligned with everyone, now that Jasmine is gone, there is nobody in the house that he doesn’t like.

Terrance has decided he is not going to say what he knows about the Leftovers just yet, but he plans on blaming Joseph for everything.

Kyle tells Michael and Brittany that he thinks maybe Joseph spilled the beans to Alyssa and Terrance, but he doesn’t know.

Time for the HOH competition, on go, the HG’s must stack 21 micro energy drinks, starting with six on the bottom and one on top, and there is a sequence. Lastly, they can only use tweezers to stack them.

Kyle is doing really well at the competition and drops. Turner is in his element, his hands are not shaking at all and he is convinced that he is going to win it. Over and over again the players keep dropping until Turner does it. Turner feels like a million dollars, he is the second two-time HOH winner this season. Monte is happy he won, but h still doesn’t know what is in Turner’s mind because of what happened outside the BB house last week. Kyle was so close twice, but if it couldn’t be him, he is glad it is someone from the Afterparty.

Michael still thinks the Leftovers are ok, and it’s a no-brainer, Taylor and Alyssa have to go up. Turner is aligned with everyone on the block, so he is going to tell everyone what they want to hear so nobody freaks out. Taylor asks Turner if the Leftovers are still a thing and says course.

Turner knows he is going to make enemies with his nominations, he just needs to figure out what is best for his game. Turner wants to take a shot at Terrance and Alyssa and Kyle looks like he is going to faint. He tells Turner they have to take a hit at the insiders aka Leftovers, and Michael is the target.

Monte sits with Taylor who tells him that he was fifth in the Leftover, there was a mini alliance within the Leftovers and he wasn’t included. With that information, Monte starts to spill and shifts sides. Kyle joins them and he makes it clear that both Turner and Kyle were not important to the Leftovers.

Time for the nomination ceremony, Brittany and Taylor are put up for eviction.