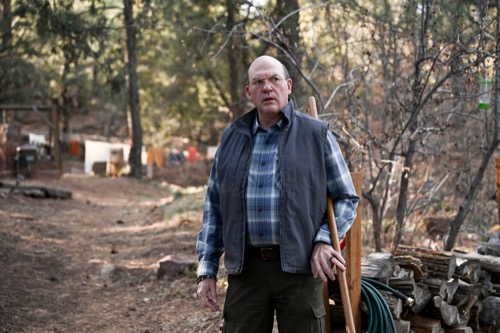 Tonight on ABC their new thriller by David E. Kelley, Big Sky airs with an all-new Thursday, February 24, 2021 episode and we have your Big Sky recap below. In tonight’s Big Sky season 2 episode 9 ‘Trust Issues,’ as per the ABC synopsis,“Reeling from the emotional news of Joseph’s death, Jenny and Cassie desperately search for answers. After Bridger and Madison receive a threatening call from Ren, Max and Rachel take matters into their own hands, frantically deciding to confide in Jenny about the drugs and money.

Elsewhere, Dietrich becomes hellbent on revenge following his discovery of Travis’ betrayal; and Wolf and Agatha attempt to protect Phoebe, but thanks to Ronald, all does not go according to plan.”

Tonight’s Big Sky episode begins with Cassie finding her father dead. Jenny is looking around, Tubb says maybe it is a robbery, but Jenny doesn’t thinks so. Elsewhere, Wolfgang returns to the farm and Agatha is there to greet he and Phoebe who asks if they are bad people like Ronald. Agatha tells Phoebe to follow her to see her mother. Ronald is tied up in the back of the pickup, Wolf tells him he has made a mess and it is time to fix it all up, he gives Ronald a needle in the neck.

Agatha unlocks the door and lets Phoebe go into the room with Scarlett who asks where Ronald is. Agatha says they are taking care of him, she locks the door. Phoebe tells Scarlett that Wolf hurt Ronald. Scarlett promises Phoebe that she is going to get them out of there.

Cassie is home, she looks at all the photos of her dad around the house – she thinks back to them telling each other that they love one another. Her son comes in the room and asks why someone wanted to her grandpa. She doesn’t know but she promises him that she is going to catch them.

Bridger goes in to see his sister, she wants to tell their parents what is going on but he says they don’t have to, they have a way to fix it.

T-Loc is alive, he is with Max and threatens her. He wants to know where the money is, then he will get out of their lives forever.

Jenny tells Tubb that they both know that this was not a random break in, he tells her not to jump to conclusions. Jenny tells him that they need to get Cassie some answers.

Agatha and Wolf get into an argument, she tells him that everything is not fine. She tells him to get rid of Ronald, a killing dose, or she will.

Ren calls Bridger, she tells him that she wants her money and he has twenty four hours, or else. Madison and Bridger go home, the money is missing and the window is smashed in the room.

Wolf is with Ronald who is tied to the wall, he yells at Wolf demanding to know where Phoebe is. Wolf yells at him about killing Joseph and asks why he was even there. He goes on to say that he betrayed his trust for the very last time. There are no more do-overs, the only questions is now is how.

The kids are together; Bridger, Madison, Max and Harper. Max says that T-Loc made her break into their house. Harper wants them to let T-Loc take the fall for this. Bridger says that Ren threatened to kill their family. Bridger tells Max that he doesn’t believe her.

Dietrich is furious, he returns to the woods and finds out that Stone didn’t kill T-Loc after all. Jenny comes out of the shower, Travis is at the door, he asks about Cassie’s father.

Ren arrives home and her brother is there, he asks her why she is dragging her feet, if she can’t do it she should get Donald to do it. He tells her that she doesn’t matter, but if she screws this up, their dad is going to blame him. She either takes care of business, or he will. She tells him that it sad that she is smarter than him.

Ronald is trying to escape while Scarlett is lying down with Phoebe trying to console her. Agatha opens the door, she made them something to eat. Scarlett asks if she can speak to Wolf. Agatha tells her that she has jeopordized everything they have worked for and bad dogs, face bad consequences.

Wolf tells Agatha he is sorry. She tells him the experiment is over, he has to put Ronald down, he has partners and if they hear about this, they will put all of them down, he needs to do what needs to be done. Wolf promises to do it after their session tomorrow. Agatha says she can see inside Scarlett’s soul, it is ugly and as black as night. Agatha says they can raise Phoebe. They brought in two monsters, thought they could fix them and they failed. They need to remove them from the world. He hates to do anything to Scarlett, because his brother would hurt women. Agatha says she will take care of Scarlett, he can take care of Ronald.

Bridger goes to see Sensai about his problem, he tells him to go to his parents, they are both lawyers. A knock at the door, Ren’s brother is at the door, he is looking for Bridger. Sensai says he is not there and they can come back another time. Sensai gets a bullet in him and Bridger runs out back.

Mark goes to see Cassie, she thinks someone killed her father who was looking for her. He tells her about going to Wolf’s farm, something that struck him was a box of cereal, the same one that Ronald used to eat.

Stone shows up to the bar and Dietrich questions him about T-Loc. Stone brings up the fact that he was questioned about Cassie’s father. Dietrich shoves Stones head to the table and calls him a traitor.

Bridger walks into the house, his sister told their parents everything, he hugs his dad and says he messed up really bad.

Harper and Max show up at the station to see Jenny, they say they did something wrong.

It is time for Cassie’s father’s funeral, she tells Jenny that almost everyone she loves is gone. Whoever did this, she is going to get them. Jenny tells her that whatever she needs to do, she has her back.

Scarlett and Phoebe are on the bed, Agatha tells them to pack their bags and they will be fee to go. Then she asks Phoebe if she wants to help pick some fruit.

Then Agatha returns to the house and Scarlett attacks her, Agatha had a needle to inject in Scarlett, but ends up geeting it in her neck, Scarlett has killed her. Wolf is outside, he see Phoebe and realizes something is wrong. Scarlett is in the barn, she unties Ronald, just then Wolf comes in the door and tries to attack them.

Wolf has his hands around Ronald neck and is choking him when Scarlett jumps him. Wolf is about to smash Ronald’s head in, he says this ends now, Scarlett hits Wolf on the back of the head with a shovel. Then Ronald gets up and finishes Wolf off, says it is not over until he says it is over.