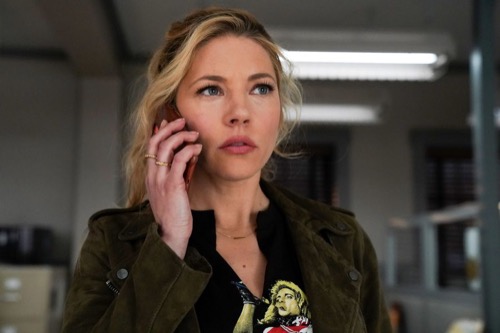 Tonight on ABC their new thriller by David E. Kelley, Big Sky airs with an all-new Thursday, March 3, 2022 episode and we have your Big Sky recap below. In tonight’s Big Sky season 2 episode 10 ‘Happy Thoughts,’ as per the ABC synopsis,“Ren intervenes with Jenny’s plan to bring Jag into custody, while Ronald and Scarlett work together to find safety in a new environment. Then, Cassie and Lindor discover the aftermath at the ranch and reluctantly join forces with a familiar face.

Later, Jag and Ren, anxiously awaiting their father’s visit, find themselves at odds about how to deal with the problem of Joseph’s ranch; but will the pressure of impressing him lead them down a familiar (and dangerous) path?”

Tonight’s episode begins with Ronald, Scarlett, and Phoebe in a pickup truck. When Scarlett calls him Arnold, Phoebe says to call him by his real name, she knows that is not his name. They stop at Horizon Motel and Phoebe moves far away from Ronald when her mother goes inside. He tells her that he is going to protect her and her mother. She says he is going to die, she had a dream about it. He says his mother always said it was a sin to talk about your dreams, she called them dirty movies.

Wolf is laying on the barn floor, his dog licks his head, he is not dead.

Jenny is with Tubb at the dojo where the Sensai was murdered. She tells Tubb that he wants these bodies to stop dropping, the key is T-Loc.

Max and her mother are in the station, sitting across from Jenny and Poppernak who tells her that a lot of people got hurt because of her actions. Max is crying and says she is sorry, she wishes she could take it back. Jenny says T-Loc taking that money is a huge problem, the cartel is not who you want to mess with but she will try to keep her safe. Jenny tells Poppernak that she wants surveillance on the two of them 24/7.

Cassie goes to see Mark and says, ok so what if he is right that Ronald killed her father. Mark says that even if Wolf is working with Ronald, why would Ronald risk so much to kill her father. She wants to go to Wolf’s farm, he doesn’t like the idea so she says then they go together.

Wolf is up, he is bloody and hurt, grabs a first aid box. He is hurt badly and tries to attend to his wounds on his own.

Dietrich has Stone thrown in a hole in the ground, that was meant for T-Loc. Stone says he can get his money back, Dietrich tells Bob to shoot him and let him bleed out. Then, when Stone knows there is no way out, he tells him that he is a cop.

Ren loves her cabin, Taya is there and she tells her that she is having a problem getting Fentanyl into the states. She needs safe and secure transport, Tanya says she thinks she may know people, let her see what she can do. Jag walks in, he tells Donno and his henchman to leave the room. Jag tells Ren that they are not setting up shop there it is a bad idea.

Jenny and Poppernak knock on the door, they want to have a chat with Ren and Jag down at the station. Meanwhile, Scarlett gets Ronald safely into a bed. She looks at the wound, it is bad, but she tells him that she is going to make it better, she promises. Scarlett and Phoebe go to a pharmacy to get supplies, a security officer sees Scarlett shoplifting and approaches her. Scarlett pulls a knife on him, he lets them go.

Jenny questions Jag at the station but he just keeps saying lawyer, over and over again. She tries to get to him by pinning him against Ren, but it doesn’t work. Jenny tells him that she has a witness that puts him at the dojo.

A maid goes in to clean Ronald’s room and finds him on the bed covered in blood, he tells her to go away. She offers to call an ambulance, he bolts out of bed and strangles her.

Wolf is in the house, he finds his wife dead and is shocked.

Jenny and Poppernak interview Bridger, she says they brought in the man who killed his karate instructor they just need him to confirm their identity. Bridger looks at the photos and says he has never seen them before in his life, he is lying. Jenny goes to see Tubb and tells him the cartel got to the family and they can’t find T-Loc, they have nothing.

Ren is cleaning out a gun, her brother walks in and she says she got to Bridger’s parents, he owes her a thank you. She tells him that she is done with doing what dad wants.

Poppernak is looking at the video to see who stole the camper, he sees Ronald at the gas station stealing it.

Tanya is back at the house, Ren is not there but Jag is. Jag wants to know what Ren’s plan is, but Tanya is being loyal to Ren.

Phoebe finds a gun on the floor of Wolf’s truck, Scarlett says it belongs to Wolf and puts it in the glove compartment. They pull up to the motel, Scarlett sees the door to the motel room open, tells Pheobe to stay on the truck. When Scarlett goes into the room, there are two bodies on the floor, Ronald and the maid. She gets Ronald to sit down and says they have to go. Phoebe comes into the room, she tells her to grab her backpack.

Jenny is with Travis, she asks him if he heard anything about Bridger, he recanted. He asks her about the money if it turned up. She tells him that T-Loc has the money, a local lowlife. Travis says he doesn’t know him.

Jag goes behind Ren’s back, his father arrives in town. His father tells him that he is not a tourist, he called and he is there. And, he heard about his run-in with the police and wants to know if there is anything that he has to worry about. Then he says he better be looking out for Ren. Jag says Ren doesn’t want his advice but he has a plan. His father laughs at him and says there is a first time for everything. He tells his father he wants to build a factory there, law enforcement is a joke.

Stone meets up with Dietrich and Bob. Deitrich wants his money, Bob just wants to kill Stone. Stone says T-Loc has the money, Dietrich says it is funny since that is the guy he was supposed to kill.

Poppernak shows Jenny and Tubb the video of Ronald, Tubb puts an APB on him and Jenny says she has to go see Cassie.

Cassie and Mark arrive at wolf’s farm, they go in together, guns raised. They see blood and venture into the house. Wolf comes out of the room, he says the company always arrives when you have the most cleaning to do. He says Ronald is gone, but they want his help, they can lower their weapons.

Max arrives home, she sees someone speed away and finds a window smashed. Inside, things are turned upside down, she sees her mother’s purse and keys on the floor and shouts for her. Then she sees blood, she calls Jenny and while she is on the phone with her, someone grabs her from behind.