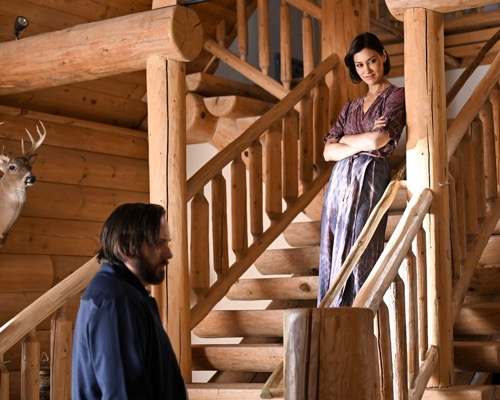 Tonight on ABC their new thriller by David E. Kelley, Big Sky airs with an all-new Thursday, March 31, 2022 episode and we have your Big Sky recap below. In tonight’s Big Sky season 2 episode 14 ‘Dead Man’s Float,’ as per the ABC synopsis,“As Jenny urgently attempts to prove the Bhullars are involved in the drug-related death of a teenager, her suspicions about Travis continue to grow, putting their relationship on thin ice.

Meanwhile, Veer discloses the real reason behind his visit to Montana, and a surprise visitor resurfaces strong feelings from Lindor’s past.”

Tonight’s Big Sky, episode because Travis, asks Jenny to meet him in a secret location. Once there, he shows her Bob’s body dead in the back of his pickup. Travis says he was instructed to make Bob disappear. She tells him to arrest who did this, he says he doesn’t know what happened. Jenny asks him what is going on with the Kate. She knows that she was his informant and he fell in love with her and the Bhullars killed her. She tells him she loves him but this is too far. She tells him to go bury the body, and she can’t do this anymore. She drives off.

Ren and Jag are talking, he asks her if she trusts Stone now. She says no, but they need him for now. Jag tells her that she can trust him, he is her brother and all she has right now. He says he saw their dad gazing out the window and it was weird.

Hayden is looking for her brother Mason who didn’t go home last night. She finds his pick truck parched near the beach, then she sees him. She goes over and pulls him over, she touches his face and it’s cold. In his hand, he has a small bag of pills.

Jenny arrives on the scene, Tubb and Poppernak are already there. She goes down to the body and sees that it is Mason Ford, she knows the whole family.

Jenny goes to see the Ford family, she confirms that Mason is dead to his mom and dad. His dad Richard wants answers, but Jenny says that they have to wait, his death has not ruled a homicide just yet. She asks if there have been any issues with Mason yet.

At the office, Mark is bringing in boxes. He is with Denise and he says maybe he can help out around the office while he is on medical leave.

Jerrie is with her father, talking about her mother. He tells her that this last week has meant the world to him and her mother. She says she is glad she came. She tells him that she has to go back home eventually but she would like if he visits.

Stone is back, Dunno asks him where he buried the body. Dunno asks to see his hands. Dunno shows him a video of his killing Bob, he tells him that if he even thinks of hurting Ren, he will take him down himself.

Jenny meets Hayden, Mason’s sister out at work. She says she just couldn’t be home right now. Jenny tells her that Mason died of a drug overdose. She shows Jenny the pills she found on Mason, she panicked and took them, because she didn’t want her parents seeing and, Mason didn’t do drugs, so it doesn’t make sense.

It’s dark outside, Ren sees something outside and goes to get Jag. They get a gun and go to see what it is. They find their father, he is reciting a poem out loud. He tells them to go inside, they will talk, it is time.

Inside the house, Veer says it calms the mind to recite things. He says they ran into trouble in Toronto. Vikram betrayed him, Alicia caught it. He managed to drain several of their accounts. He took matters into his own hands, tried to kill him, but he got away. Jag asks how bad is it. Ren wants to know if they are going to come after them. Veer says if they do, God help them all.

Dunno tells Tonya he suspects that trouble is coming, he is team Ren and he is worried about her – her dad showing up is not good and he doesn’t trust Stone.

At the office, Jerrie walks in and Mark gives her a big hug. She tells him to bring her up to speed. They share a beer and she tells him that her mom was angry when she died. And, she was mad that she didn’t get to say what she wanted to say because her mom was sick. But at the end, it would not have made a difference. She asks if he spoke to Cassie, he says she is content to stay off the grid for now. He tells her that he missed her.

At the station, Jenny and Poppernak walk in, the forensics came back on those pills, fentanyl that is cut with something makes them stronger. Jenny says it is the Bhullars, they know that. Tubb says if they don’t nip this in the bud more people are going to die.

Tonya tells Brent that he can’t quit, but he says what happened to Jamison, he is out. Dunno pulls out a knife and Brent shows his gun, tells Dunno to come at him. Tonya offers to up his rate by 20% and the guy that killed Jamison is dead. Ren comes downstairs and asks Tonya if she has a problem and she says no. Then Tonya tells Brent that if he walks, Ren will kill them both. Brent asks for double, extra risk comes with a price. She gives in.

Alicia is doing morning stretches and she asks Ren if she has questions, she says no, but then asks if they are in danger. Alicia says that Veer thinks that someone will come to take him out, but they are in Montana, out of state and out of mind. Alicia says Veer has to give over the business before he is taken out. Alicia says she told him that maybe she and Jag could run things but he wouldn’t listen to her. But, if one of them were to take over, she thinks it should be Ren, she just needs to show him that she can.

Richard asks Hayden if she knows what her brother was doing out all by himself, she says no.

Stone walks into Ren’s cabin, he asks her how long she is going to hold the surveillance video over him. All of a sudden Dunno comes in and says there is a problem. Jenny drives up, she tells Ren that she just killed a kid, her drugs were found inside him. Ren is upset, she tells Dunno and Stone they better find out what she is talking about and who is messing with her product.

On a hunch, Jenny finds the drug lab. She goes to grab a pill out of a jar and gets whacked by Jag’s henchman. She hits the ground and looks up, he tells her bad move.