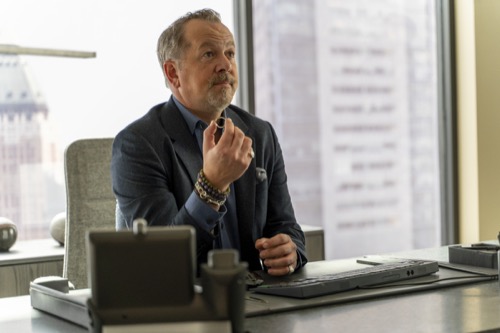 Tonight on Showtime the show Billions airs with an all-new Sunday, January 23, 2022, season 6 episode 1 called “Cannonade” and we have your weekly Billions recap below. On tonight’s Billions season 5 episode 7 as per the Showtime synopsis, “Prince revamps the team in his image with mixed results. Chuck clears his head upstate, leading a crusade against a local blue blood.

Meanwhile, Wags, Wendy and Taylor try to wrap their heads around their new positions. Season premiere.”

So makes sure to bookmark this spot and come back between 9 PM – 10 PM ET for our Billions recap.  While you wait for our recap make sure to check out all our Billions’ pics, videos, news, recaps, and more, right here!

Tonight’s Billion’s episode begins with Chuck, he gets on a tractor and shouts to a crowd holding torches to follow him. They arrive at cannons, Chuck yells out that the cannon has fired for the last time.

One week ago, Chuck is seen riding the tractor again he stops to drink some coffee and have a break when hears cannons going off, he looks pretty annoyed by it. Then we see Wendy, she is working in a kitchen. Taylor is having breakfast. Kate is boxing.

Wags arrives at the office and gets a resounding standing ovation and he says, it is great to be back after he had a small heart attack. Wags realizes at that moment that he didn’t call an ambulance, but they showed up anyway – he looks down at his ring and realizes that Prince was tracking him. He looks up at the balcony at Prince who looks really guilty.

Two weeks earlier, Prince gave everyone a ring, the Nimbus. It tracks your sleep, your resting heart rate and other vitals in the name of productivity. Prince says he doesn’t care what happened before, but now they must be pure. Taylor walks in and Prince asks her what she needs to succeed there, she says a boss that she can trust and work with, he says he is not Axe. She reminds him that he is sitting in the same office and running the same business. He wants to make her COI, to prove that he trusts her. He claims to be different and to prove it to everyone.

Chuck goes to visit his neighbor who owns the cannons and says his ancestors used to fire them at the red coats. Chuck says that they share a stream and he doesn’t like the black powder residue and the noise is jarring and unsettling. The man tells Chuck that he controls how he feels, when he hears the cannon he should feel liberty and triumph. Chuck says he didn’t visit him to start a war, the man says he always regretted not fighting in one and walks away.

Back to the office, Prince is talking to the employees and tells them that he believes he will lead them to be better at their jobs. When Prince walks away, Ben says that Axe’s ruthlessness was almost reassuring.

Scooter tells Prince that they should take the joint down to the rivets and turns it around, Prince says no, he still thinks they can turn it around. Prince then goes to see Wendy if they can turn it around. He tells her that if anyone can guide him there it is her, she is the magic sauce, she makes him nervous. They starts talking and he tells her that he has never been coached. They banter back and forth, he enjoys every minute of it.

Prince and Scooter are talking about Wags, Prince says it is too costly to get rid of him, they have to squeeze him out – that is the day they gave him the ring.

Back to the present, Wags just arrived to the office after his small heart attack and tells the team that Prince put drones in the rings, grip them and rip them. Bonnie says it is an invasion of privacy, spying on them. Taylor says she wasn’t tricked, she put it on her dog’s collar the night they got them. Victor says it is each for his own hear on out.

Chuck goes to see the mayor and asks how is that a resident can fire of antique military grade weaponry. The mayor says that is Melville, a prominent and well-loved resident who has a state arms licence, a wealthy man with a lot of lawyers. They have learned to live with it and he suggests Chuck do it as well. Chuck then heads to a local bar and buys a round of this new friends and neighbors. Then he asks everyone if it is just him or does it feel like they live in a war zone morning and night. The neighbors tells him that Melville helps the police department, the fire department; nobody is going to go against him.

Prince is sitting with Scooter, he tells him that in order to keep the investors they have to win the employees, they are the best.

Chuck calls Kate over, he tells her that he could use the company. Then we see Chuck opening a valve to let water flow through down to Melville’s property.

Scooter goes in to see Prince, Melville’s ammo got wet and he couldn’t fire off his morning blast. He thinks Chuck flooded him, they are neighbors and he called because he was thinking maybe Wendy could step in. Scooter tells him that they need the word going around that they go the extra mile to help their investors, this is their opportunity to get word of mouth flowing.

Chuck is standing on his porch when Prince drops by to see him. They sit on the porch and share a drink. Prince tells him that he wants to be his ally. Prince mentions Melville, he would appreciate if he would leave him alone, he is an investor. He needs to be reputationally pristine and this will help. The cannons then go off and Chuck says that he is unwilling to help him. Chuck gets up and goes in the house tells Prince, safe travels. Next, Chuck calls his father, tells him to take his money out of Michael Prince Capital.

Ari went to the FCC, he returns to tell Prince that there were no fines or sanctions, just a six-month probationary period for business going on before. Wags says investors don’t care, they just want the numbers, the wins.

Prince goes to see Wendy, he says they are not off to a banner start. How does he keep the clients when he can’t even keep the team there every day. She tells him that he needs to change.

Prince goes to see Wags and tells him that he is not going to fire him for eighty million. Prince want to make a deal, he offers him forty million, it sucks for both of them. Wags says money isn’t the big thing, he is not going to settle. He is going to hold out for the whole pop. He tells him to get Scooter in there, then he asks him what he has learned about the team. Scooter tells him stuff that Wags says he could have gotten from LinkedIn.

Wags proves to them, that he knows them all very well by releasing some private tidbits about them. Prince says he’s got the point, Wags knows what moves the place. Wags tells them that they need them. Prince says trust is a problem and Wags tells him not to worry, maybe he will trust him one day. Then Wags goes into the boardroom and speaks to the team, he tells them that he is not done and they have a new general, they have to start looking like the mercenary team that they are. Scooter walks in and calls everyone downstairs.

Prince starts talking about rebuilding and retooling with the investors and the employees. He tells the investors that he is firing them. Chuck’s father is furious, Melville says he doesn’t give a crap because they are hundreds of companies who will want his money. Prince says from now on, the investors will have to prove their worth to work with them. They will take a hit, but they will have their heads up high. The only investor they are keeping is the New York firefighters, the rest are fired. And, if they keep wearing their rings, the data will only be available to them. He tells them to sit back and watch how badly people are going to want to get on the Prince list. The staff applaud him.

Back the standoff in front of the cannons. Chuck has his crowd, the media, the police and a guy from the state department of environmental protection and tells him that endangered bog turtles were found nestling in his marshland. What he doesn’t say, is that Chuck paid him to put them there. Melville tries to argue his case, but the whole town has as well signed a petition. Chuck gets off his tractor, he tells Melville that he wanted his war and he got it.