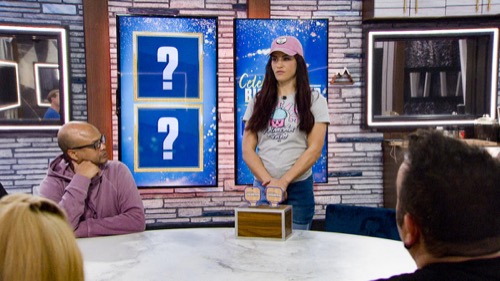 Tonight’s Celebrity Big Brother 3 episode begins with Miesha, she does haven’t a clear cut line on how to get to the finish – but she won the first race. Cynthia loves gifts, but a git that can be a blessing and a curse, she might want to return that one. Miesha wants to form an alliance, she speaks to Todrick about her plan, but he is already in an alliance with Carson, Shanna and Cynthia.

He doesn’t know if it is his cute outfit or his hat, but it is raining alliances near him. She tells him that her heart tells her that they would make a great final two. Next, she brings Lamar into it, she tells him that the athletes have to stick together, he says it makes sense.

Next, Chris Kirkpatrick asks Todrick if he will go final two with him – they have mutual friends and are in the same kind of industry. Mirai is in the shower, Teddi in the stall beside her, she asks Todrick if anyone has alliances in the house, and he says no. So the three of them form an alliance. Then they bring Cynthia into it and she tells Mirai about her already alliance of four.

Cynthia is really surprised that she is so popular and people are trying to pull her in. Teddi told herself she wasn’t going to throw herself into an alliance, but she trusts these people. Todrick has alliances with almost everyone and the only reason he doesn’t have alliances with Todd and Chris Kattan is because they are asleep the whole time the rest of the house is taking about alliances.

Shanna loves her alliance, Miesha tells Todrick that he has to come up with an alliance name. Carson actually comes up with their alliance, now of six, “formation.”

Chris Kattan is sleeping and says he hears a dying whale, or someone shoving an arm down the throat of a person and pulling their insides out – it is just Todd snoring.

Lamar talks about his former marriage to Khloe Kardashian, he says he misses her and feels bad for letting down her family, and he would do anything to make it up to them. Cynthia is in the room, he says he married her after knowing her for 30 days, they met at a welcome to LA party. He was looking forward to having children with her. He wants to take Khloe out and tell her that he is sorry.

Being the first HOH is tough – Miesha asks Chris Kirkpatrick if he wants to be in the alliance with Todrick and Lamar. They all see Teddi as a threat, Miesha thinks she might be the perfect target.

Houseguests gather in the living room, it is time to open the gala gift. But first, Big Brother has a message for them. Fashion or life will never be the same again. Inside the bag is the latest couture from BB designer Mon Won, not only will this in vogue hat keep them safe from a fashion faux pas but it will keep them save from being the first evicted. Who will be wearing the hat, Miesha will decide first who to give the hat to. And one by one they will pass the hat to another person, the last person with the hat will be safe for this week.

Cynthia is the last one to get the hat, she is safe for the week, she cannot be nominated or evicted. Mon Won has advice for the rest, fashion trends are a lot like Big Brother house guests, in one day, out the next. Remember Julie’s warning, this hat would be a blessing to one of them and a curse to the other, and their social game will be more important than ever. Be prepared, come eviction night, even if you are not nominated, you could still be going home.

Miesha is super relieved that Teddi didn’t get the hat, that could have ruined her whole HOH.

Meisha approaches Mirai and tells her that she would like her to join her alliance, Mirai is surprised and happy. Meisha says she would like to put up Todd and Chris Kattan, and backdoor Teddi. Then she asks Mirai how she would feel about going up on the block as a pawn. Meisha is confused, she doesn’t want to go home and she doesn’t want to see Teddi go home either. Mirai then goes to speak to Teddi and tells her everything, she in turn goes to speak to Todrick and tells him. Todrick can’t believe that Mirai ratted out the current HOH, he is going to go tell Meisha.

Todrick tells Meisha that she should talk to him before she talks to anyone else. Then he spills about Mirai. Miesha can’t believe that Mirai spilled the beans, now she has to come up with an entirely new game plan.

Teddi is working out, Meisha sits down near her and Teddi makes a deal, if she doesn’t put her up, she won’t put her up the following week. Mirai has now made herself a target.

Time for the nomination ceremony. The first houseguest that Miesha has nominated is Mirai, the second houseguest is Carson. Chris Kattan is shocked, he says “what” out loud. Carson is not shocked or shaken, but he is a little nervous by nature. Teddi meanwhile is feeling good because she made a deal with Miesha. Mirai says she is ready for a fight, the athlete in her is about to come out.