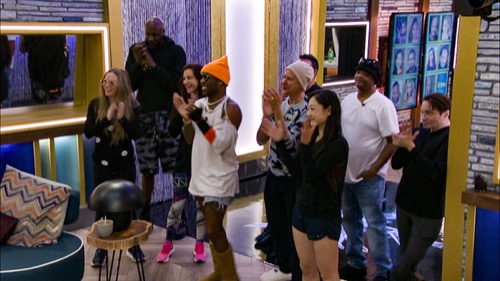 Tonight’s Celebrity Big Brother episode begins with Julie telling us that the Veto Competition and Mon Won’s hat will bring a curse into the house. Miesha’s target is Mirai and she put Carson up as a pawn. Carson knew he was going to be nominated, and he was promised safety, but he wants to win the Veto to make sure he is safe. Mirai knew she was going to be nominated and she doesn’t know if she is a target or a pawn.

Teddi is happy that she is safe but she is not happy that two people in her alliance are on the block. Todrick is a super fan, he is not there to play, he is their to slay. He loves Carson, but he is a big threat to Todrick’s game, and it’s not a bad thing that he is on the block.

Miesha tells Todrick and Cynthia that she felt good about her nominations, and Mirai is the target. Her original plan of backdooring Teddi blew up in her face and she realizes she has to be more strategic moving forward. Mirai tells Chris Kattan that she is not upset about being nominated but everything is starting to get to her. Chris goes over and gives her a reassuring hug. Chris really likes Mirai, she is a really nice person and he hates the way she is feeling right now.

Carson asks Todrick if he thinks Miesha knows about their alliance, formation. Teddi tells Carson that she thinks Mirai was working as a double agent because she told her that Miesha was planning on backdooring her.

Chris Kirkpatrick loves watching Miesha work out, as a fan of MMA he is really enjoying it. And watching how fierce she works out, he says “note to self, don’t cross Miesha.”

Miesha and Todrick are alone, she offers him a final too and his gut tells him that it is good decision to work with her.

Shanna tells Carson and Chris Kirkpatrick that once she went on the Wendy Williams’ show and she asked her if she was going to Lamar and Khloe’s wedding, Shanna thought she said “Kim” and Shanna doesn’t like her, so she said “no way am I going to that donkey’s wedding.” So when Lamar walked in, she was hoping that he didn’t remember that she called his ex-fiance a donkey.

Time to pick players for the Veto competition. Miesha chooses Cynthia and she says if she wins, she is taking Carson off the block. Carson gets Lamar, Mirai gets “houseguest choice” and she chooses Todrick.

Todrick is thrilled that he was picked to play the Veto, Miesha tells him that if her nominations change, she is putting up Chris Kattan. Todrick tells her that Carson is the most dangerous player, everyone loves him and he probably won’t get back up on the block again. He doesn’t want to put anymore blood on her hands, but Carson, Teddi and Cynthia are a dangerous trio. Meisha thinks Carson is a threat, but he is not her target, Mirai is because she betrayed Meisha.

It’s time for the first Veto competition of the season and houseguests will be called out one by one so they can compete. Carson is first, the backyward is turned into an alpine wonderland. On go, they have to scroll though text on an oversized cell phone, use the info to help order they have to visit each location on Main street. They have to put the clock labeled 1 at the first location, the clock labeled 2 at the second, and so on. Once they think they have the right order, they buzz in.

The player with the best time to complete the Veto competition completely, wins the Power of Veto. Lamar doesn’t really want to win the Veto, so he is taking his time. Todrick would love the throw the competition, but he wants to show Miesha that he is loyal. This Veto is Mirai’s life in the game, but the more she reads the texts the more confused she gets. Time to get the results.

Carson wins the Power of Veto, he says “I am not as dumb as I look.”

Meisha now thinks Todrick could be right, Carson is a threat in the house. Now Meisha has to nominate someone else. Mirai goes to Meisha and pleads to stay in the house. Meisha asks if she can trust her, she says yes. Meisha tells her that if she keeps her, and she wins HOH, she has to put up Carson, because it is the Carson’s of the world that wins games like this.

Meisha says she is going to put up Chris Kattan beside her as a replacement nominee. Everyone in the house is nervous, until Meisha names her replacement, nobody is going to feel safe, other than Carson and Cynthia who are safe. Shanna goes to see Meisha, she tells her she is not in a major alliance, she tells her about formation – Meisha is interested to hear more.

Meisha and Todrick are in the gym, Todrick tells her she should put up Teddi as a replacement because she is close to Carson. If she doesn’t take down Teddi, there will be trouble for them. Meisha calls Teddi into a room and tells her that given information that she has, she will have to put her up as a replacement nominee on the block. Teddi cries and says she wishes she would have given her a fighting chance, she look her right in the face and gave her word.

Time for the Veto meeting, Carson uses the Power of Veto on himself. Meisha stands up, she has to name a replacement nominee and it can’t be Cynthia because she has the Mon Won hat. Meisha names Teddi as her new nominee. Teddi says after she removes the knife from her back, she is going to fight to stay. Carson is totally thrown off, he is off the block and now Teddi is on the block.

It’s time to reveal the curse of Mon Won, Julie tells the houseguests that the hat has gone out of fashion. And this time, you do not want to be the last person to get Mon Won’s hat. A clue to Mon Won’s hat has been near them the whole time. Cynthia has to remove the logo, turn it up side down, the hat now reads Nom Now. Just like before, they will pass the hat to one houseguest to the other, the last person to receive the hat will be on the block and will replace either Mirai or Teddi.

Now time to find out who will be tonight’s new nominee. Carson and Meisha cannot be nominated so they take a seat. The new nominated individual gets to choose who to replace on the block. Cynthia gives the hat to Shanna, then to Chris Kirkpatrick, to Todrick, to Chris Kattan, to Lamar. Todd is the new nominee. Todd takes Mirai off the block. The two nominations are Todd and Teddi.

All of the vote are in, with a vote of five to three, Teddi is the first celebrity evicted from the Big Brother house.

Teddi tells Julie that she campaigned hard to stay in the game. She is honored that she is a big enough threat that they felt that they needed to get her out of the house. She says she feels most betrayed by Todrick, he formed a completely different alliance from her and voted her out.

She thinks Lamar is playing the best game, he just doesn’t care, or maybe Chris Kattan, sleeping his way through it. Teddi says Big Brother is more cutthroat than Real Housewives.