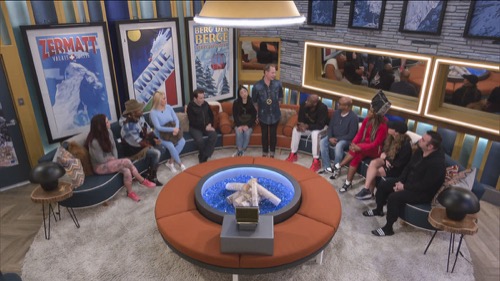 Tonight’s Big Brother episode begins with the aftermath of Teddi being evicted from the Big Brother house. Lamar tells the women to not cry. Todd is wondering why Chris Ka. put him on the block, he says it is pay back time. Mirai is just happy that Teddi was sent home. Carson wants to now take down Miesha. Cynthia is kind of peeved that it is obvious that some of the people who said they would vote against Teddi didn’t.

Shanna admitted that she went with the house because she didn’t think they had the numbers. Shanna goes to see Meisha and Chris Ki. and tells them that Cynthia is mad at her because she changed her vote. Todrick tries to do damage control with Cynthia but at the end, he made a move that was best for his game.

Time for the HOH competition, the houseguests performance in this competition is going to be critiqued by the popular website, Rotten Potatoes. If they don’t give an epic performance, the critics will leave them mashed. Here is how it works, when the horn sounds go to the first potato and take a shot, if they are satisfied with their score, hit the button and lock it in to have it added to their potato meter. They have two minutes to lock in their time on three potatoes, it is up to them how much time they spend on each potato. If they don’t lock in a score, they will be given a zero for that shot.

Chris K. with a score of 74, wins the HOH, Carson calls him the “potato whisperer” and knows that he is close to Meisha, so says that he has to start buttering Chris Ki.’ potato.

Shanna is so excited that Chris Ki. just won, they are in a final two together. Chris Ki. wants to target Mirai, Miesha throws Carson’s name out there and tells him he should put up Mirai with Carson and if one gets off, put up Cynthia. Chris Ki. is not happy about Miesha telling him what to do. He goes to speak to Shanna alone and tells her that he doesn’t like her trying to run the house.

Chris Ki. talks to people in the house about his HOH decision and he finds that Lamar and Todd are both team players who will be on his side. He goes to the gym to work out and Miesha is there, he tells her again that his target is Mirai. Miesha says if Mirai wins the POV, whe would he put up at a replacement, he says he doesn’t know and she again targets Carson, she says he is the most underlying threat in the house.

Chris Ki. says he is not really a threat to him. She says it is more about the mezmerization as the game goes on, not physical and he has a good memory. Chris Ki. maintains that Carson is not a threat. But, Miesha doesn’t give up, she mentions Carson’s name again.

Time for the nomination ceremony, Chris Ki. nominates Chris Ka. and Mirai. He nominated both of them for the same reason, they haven’t talked any game with him. Chris Ka. Is his pawn, Mirai is his target. Chris Ka. Is surprised that he got nominated but says he is ready to put his dukes up. Mirai is discouraged, but won’t give up. Miesha gave Chris Ki. 101 reasons for putting Carson up, but she guesses she is not insynch with Chris Ki.