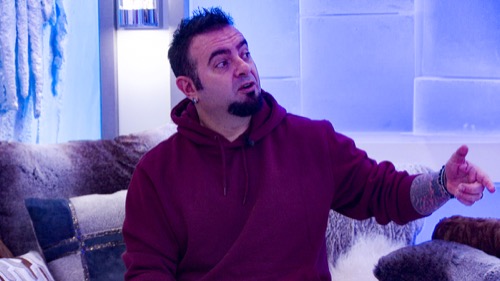 Tonight on CBS Celebrity Big Brother US 2022 airs with an all-new Friday, February 7, 2022, episode and we have your Celebrity Big Brother US  2022 recap below! On tonights CBBUS3 season 3 episode 5 as per the CBS synopsis, “Tonight we will lose another houseguest.  But first we will have the PoV events and this is a Veto everyone wants to win. Currently we have Mirai and Chris Kattan on the block, but that could all change. At the end of the evening someone will be gone!”

In tonight’s Celebrity Big Brother it’s been a wild few days in the Big Brother Household! There were already alliances in play. There was also a competition for veto. Mirai wants that veto because she was one of two up for elimination. Chris Ki put her up for elimination in spite of his allies telling him to back down. They all wanted him to eliminate Carson because they see Carson as the bigger threat, but Chris Ki was the HOH and he wanted to eliminate people who couldn’t help his own game. Which is why Mirai was up there along with Chris Ka. Chris Ka wasn’t even playing really. He was sorta treating the whole thing like a holiday and he wasn’t making friends or putting in the work to stay and that’s why he was nominated. And it was enough to convince him to change his game.

Chris Ka spoke to Carson. He said he wasn’t ready to leave. He also got quite up close and personal with Carson after the lights went out. Once those lights are out, its pitch black. Chris Ka tried to leave the room and he ended up stumbling everywhere. He almost fell on Carson. He did fall down several times and he hit his head. Its miracle he didn’t hurt himself. Chris Ka was later able to leave the room and he doesn’t have to worry about his game because literally no one was talking about him. They were all talking about Mirai. Mirai was a part of the athletes alliance. Miesha desperately wanted to save her. She was putting everything to convince Chris Ki to change his mind.

But he wasn’t going to change his mind. Chris Ki was playing a long-term game. He wasn’t going to change his mind about Mirai because if he did then it would look like Miesha was running everything and that would make her position stronger. Not Chris’s. Chris was also recruiting people to his side and he tried to do so with Lamar. Lamar wasn’t really playing the game at the time. He had a dream about his son who died. He remembers talking to him and that was a chance he never got in life because his son died when he was six months old from SIDS. And so Lamar was both happy and sad with the dream because that was something he never got to have.

Everything was left on the veto competition. Mirai’s allies went into it hoping to save Mirai. The veto competition was later about matching and it came down between Todrick and Shanna. Shanna went on to win the veto. This worked out great for Chris Ki because he had absolutely been horrible at the game. He would never have won on it on his own. It’s a good thing Shanna is an ally because now she was playing the same game as him and she would ensure that Mirai stays up on the chopping block. Shanna was later asked if she wanted to play her veto. And she chose to keep it for one more day.

Chris Ki’s nominations remained the same. It was either Chris Ka or Mirai. Mirai was the bigger threat to him but Chris Ka could also go because its not like he put much of an effort into staying. He talked to Carson and that was it. The smarter thing would have been to talk to other Chris or even to the people in the know. Instead, he talked to one person. That alone wasn’t going to save him or his game. Chris Ka and Mirai both had the opportunity to address the room. They asked not to be voted out. Mirai made a heartfelt speech. Her allies promised to back her up and then they didn’t follow through once she lost the veto.

After the veto, mostly everyone overwhelming voted to evict Mirai. Mirai was later eliminated from the competition and that was it for her. Mirai wasn’t upset about it. She still went on to hug everyone and thank them before she left. She was true class. Her allies on the other hand were not. It wouldn’t have effected the game if at least one person voted to keep her. None did. Mirai left and Chris Ka lived to fight another day. Chris Ka didn’t even try to save himself and so he really lucked out with all of this. And he’ll probably stay not being a threat while Mirai went from the game to her interview.

Mirai mentioned how daunting it was to be the youngest as well as the only Asian in the group. She felt surrounded the whole time and so leaving wasn’t heartbreaking for her.