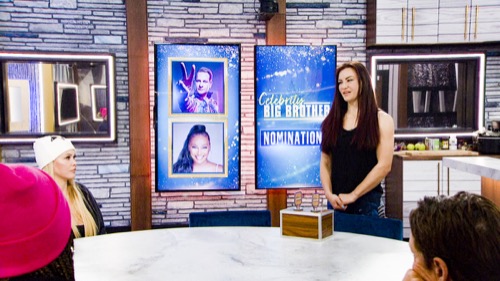 Tonight on CBS Celebrity Big Brother US 2022 airs with an all-new Friday, February 11, 2022, episode and we have your Celebrity Big Brother US  2022 recap below! On tonights CBBUS3 season 3 episode 7 called, “Veto and Live Eviction,” as per the CBS synopsis, “Tonight on Big Brother we will start with the PoV competition and then we will find out what the winner does with the golden power of veto.  Following the competition one houseguest will be sent home.”

In tonight’s Celebrity Big Brother episode begins with the nominations having been finished, Carson says he is super popular and doesn’t know why Meisha has it in for him. Cynthia is a little disappointed that Todrick didn’t have a say in keeping his old buddy, Cynthia, off the block. Meisha’s big target is Carson, and Chris Ki. is worried that he will be next. Carson says he is surprised that Meisha doesn’t let Chris Ka. go home, he wasn’t feeling well in the last HOH competition and he has said that he wants to go home.

Todrick tries to save his reputation with Cynthia and tells her that it wasn’t his decision, he would not have put her up. Cynthia says she would have appreciated that he communicate with her and give her a heads up. He tells her there is no chance that she is going home this week, she doesn’t have to worry. Todrick tells Meisha that he thinks Chris Ki. and Shanna are going to target them. Meisha just wants to worry about Carson first, after that she will worry about the rest. Todrick thinks that if Carson comes down and wins the Veto, they need to put up Chris Ki. Carson tells Cynthia that if he wins the Veto he is going to use it on her. Cynthia tells him that he is gracious, but she doesn’t agree with it.

Shanna opens a door and Todd pretends to have gotten hit in the face. Shanna tells Chris Ki. that she thinks she is going to get back doored. He tells her that they have options. He tells her that if she wins the Veto she should take Carson off, he thinks they will put him up. He knows it is a huge risk that he could go up, but he believes he has a good relationship with Meisha and he won’t be the target. Shanna knows what he is pitching is super risky, but the alternative is to just sit around and let Meisha pick them off one by one.

Chris Ka. is having a hard time, he is not feeling well and wants to go home. Everyone gathers in the living room for an important announcement, Chris Ka. will not be continuing in the Big Brother game. Chris Ka. sends a video message, he says the experience has been a difficult thing to do, but meeting each one of them has impacted his life.

Todrick gets frustrated when he tires to talk game with Lamar who doesn’t understand. Todrick says if Lamar could, he would probably vote out Julie Chen!

The goal is to stack as many snowflakes on their goblet as possible. In order to have more stacking time, they will have to ride their reindeer again. When they think they have stacked enough snowflakes to lock in the win, they have to press their button and lock in their score. If there clock ever runs out, their experience is over, their score will be zero. The person who stacks the most snowflakes in the least amount of time will win.

Lamar has timed out, he is out of the competition. Miesha times out as well and Cynthia shockingly clocks in with nine. Shanna clocks in with 22, Miesha approaches her and tells her that she can take Cynthia off the block it is not who she is targeting anyway. Shanna doesn’t know what Miesha’s angle is, the competition isn’t over yet and she has no plans of doing what Miesha wants her to do. Carson really wants to win, it’s the only way he can save himself, and he admits that he looks good in gold. Carson times out. Todrick times out as well. Shanna has won the Veto.

Miesha’s plan is still to get Carson out, so she goes to see Todd, Lamar and Chris Ki. and asks if either of them want to go up as a pawn in case Shanna takes Cynthia off the block. Todd tells him to put him up, he doesn’t mind, he trusts her. Lamar doesn’t trust it so he won’t volunteer. Chris Ki. goes right to Shanna and tells her that Miesha is putting up Todd as a pawn. Chris Ki. wants to draw a line and piss off Miesha. Shanna tells Carson that she wants to take him off to shake up the house, then they will put Todd up and they will vote him out. They just need to get Cynthia on board.

Miesha is starting to open her eyes about Shanna and Chris Ki., she thinks Chris Ki.’s mannerism is different and there could be something up. Miesha takes Chris Ki. to the side to speak to him. Miesha tells him that if Shanna takes down Cynthia, will he vote out Carson, he says yes. She says she wants to make sure he is on the same page, he says he is on it with her. He says everything he has ever done has been a thousand percent for her, he is completely true to her. She says she is not trying to send Todd home, he says he is looking out for her. He tells her that he has an alliance. He wanted to play the game with integrity and not lie, but he has to say what she wants, otherwise she will put him on the block.

Miesha asks Shanna what she is planning to do, she says she wants to take Cynthia off. Miesha is worried, her using the Veto causes unnecessary risk for her, so she wants to convince her to keep the nominations the same. They go in the HOH room and Miesha asks Shanna what her intentions are. Miesha tells her that she is not her target. Miesha then asks if she is going to pull off Carson from the block, Shanna says no. Miesha tells her that she should just leave Cynthia there, Shanna says she is going to play her game, but she will take into consideration what she said.

Time for the Veto meeting, she uses the Veto on Carson and Miesha looks pissed. Miesha blames Shanna for forcing her hand, she puts Chris Ki. up as a replacement nominee., but she doesn’t feel good about it. Miesha tells Shanna that she has now drawn the line in the sand. Chris Ki. tells Shanna not to let Miesha get to her, there plan was to flip the house and they did; this is great for Shanna’s game.

After 17 days in the Big Brother house, Julie gives the houseguests some headlines.

Time for the next HOH competition and this one is physical and called, “Angry Glam Squad.” The concept is simple, no matter what they have to stay on their directors’ chair. The last celebrity standing will be the new HOH. It starts with the set moving forward, so they are all trying to hold on in an angle.