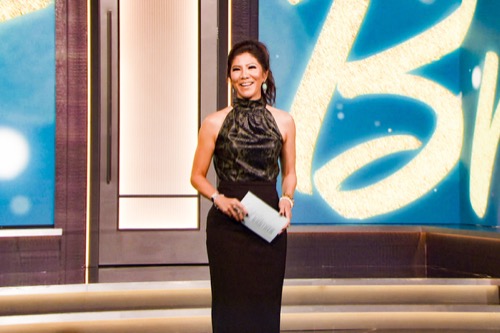 Tonight on CBS Celebrity Big Brother US 2022 airs with an all-new Sunday, February 13, 2022, episode and we have your Celebrity Big Brother US  2022 recap below! On tonights CBBUS3 season 3 episode 8 called, “HoH and Nominations,” as per the CBS synopsis, “Tonight on Big Brother we will start with the completion of the HoH competition.  Once the new Head Of Household is named he/she will announce her nominations for eviction.”

Tonight’s Celebrity Big Brother episode begins with the continuation of the endurance competition where the houseguests are all wanting to be the next HOH winner. It’s day 17, colored powder is blasted on the players. Miesha says this is a living nightmare because she can’t compete and really needs one of her alliance to win. Next, a blast of pink goop. The chairs they are holding on to, which are attached to a large wall keeps tilting forward. Lamar drops down first. Miesha says she is down to needing Todrick to win because there is no way Todd can do it.

Cynthia is down, it is up to Shanna and Carson to win it for their side of the house. More goop aka nail polish is blasted at the players in multlple colors. It is dripping and freezing. Colored hair falls down and sticks to everyone. Todd jumps off, his shoulder is sore. They are basically parallel to the ground, Shanna wants to drop so bad, and she does. It is down to Todrick and Carson, if Carson wins they can flip the house. Carson knows that if he doesn’t win this, he will be on the block the third time in a row.

Todrick is having a hard time, he is slipping so he wants to make a deal with Carson. Miesha oversees it and she wants Todrick to hold on as long as possible. Meanwhile, Carson says he can make a deal. Todrick drops. Carson is the new HOH. Cynthia is thrilled, the game has changed. Todrick made a deal with Caron, he believes he is safe. Miesha says this is the worst case scenario.

Shanna couldn’t be happier that Carson won, Miesha’s side of the house is destroyed and Shanna says it is amazing. Todrick wants Miesha to stay in the house, so he plans on campaigning for her. Miesha meanwhile doesn’t plan to go down without a fight. Carson tells Shanna and Cynthia that he made the deal with Todrick but he doesn’t care, his target is Miesha. And Todd messed with Cynthia, so he thinks he will put him up against Miesha. Todrick goes to speak to Miesha and tells her that she is just amazing to work with. She says she wouldn’t change anything, working with him in the house.

Lamar and Todd are talking game, really! Todd thinks it is going to be him or Lamar to go up. Lamar doesn’t understand how the whole game works and Todd jokingly says by the time he understands it, he will probably be home.

Carson asks everyone to see his HOH room, Miesha won’t go, she says she is not going up there to kiss his butt. Carson loves his room, especially a photo of him and his horse Bobo.

Todrick is in a room with Carson, Shanna and Cynthia, Carson tells Todrick that none of them have a chance to win if Miesha is in the house. Todrick says if Miesha leaves, he can then work with the three of them to get rid of Todd and Lamar. Todrick realizes that he will never win this game if he continues to align himself with Miesha.

Todrick goes to see Miesha, he tells her about the deal he was given, if he wins the Veto, they want him not to use it and let the nominations be the same so that Miesha goes home. Next, Todrick goes to see Cynthia, He tells her that Shanna is a snake, she has been playing both sides of the house and wanted to get Carson out. Is he exaggerating, yes. Cynthia is shocked, she can’t believe that Shanna was playing them the whole time. Todrick calls Miesha into the room and she tells Cynthia that Shanna doesn’t deserve to be in the final four, she has played both sides. Todrick’s strategic plan has worked, looks like the plan is going to be changed to back door Shanna.

Carson tells Shanna that he and Cynthia was told that she has been playing both sides. Cynthia joins the conversation and she says they were told that she was targeting Carson, she denies it. Miesha and Todrick are in the kitchen and here the loud voices coming from the HOH room. Shanna realizes that Miesha is now outside the door listening, she goes and tells her to leave and give them their privacy.

Carson, Shanna and Cynthia head downstairs, everyone is shouting. Shanna tells Carson to do what he has to do, she is done, and she walks away.

Time for the nomination ceremony. Carson nominates Miesha and Todd, he tells them they are great threats.