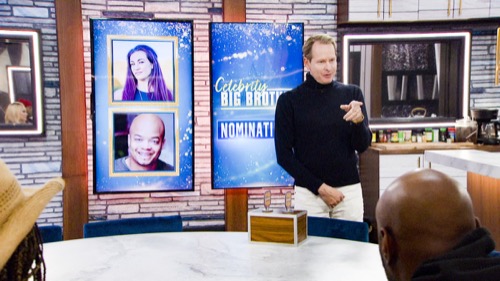 Tonight on CBS Celebrity Big Brother US 2022 airs with an all-new Sunday, February 14, 2022, episode and we have your Celebrity Big Brother US  2022 recap below! On tonights CBBUS3 season 3 episode 9 called, “PoV and Live Eviction,” as per the CBS synopsis, “Tonight on Big Brother we first have the PoV competition and both Todd & Miesha will be trying to take themselves off the block.  Once the PoV ceremony is over it is the Live Eviction time.”

In tonight’s Celebrity Big Brother Carson as current HOH had nominated both Todd and Miesha for elimination. Miesha was the easy choice because everyone and their mother knew that Miesha has been trying to get rid of him since day one. But no one saw how she or her allies began their new place. They started pushing their new narrative. Their new narrative was that they never tried to get rid of Carson and that all along it was Shanna.

They claimed Shanna was double dealing. They said it was Shanna that wanted Carson gone and unfortunately Carson and his allies bought it. They quickly turned on their once friend. This was in spite of her using her veto to save Carson from the chopping block when she could have just held onto it much longer and now be safe.

Unfortunately, she already played her veto. Her allies all turned against her and, now with everyone wanting her gone, she either had to win the next veto or risk being sent home. Which doesn’t seem fair. What’s the point of having allies if those allies are so quick to believe in your enemies and so one little lie shouldn’t have changed so much yet it did. It did and there’s no going back. The worst part is that it is a lie and that Shanna would never want to risk her own game by nominating someone. She would want plausible deniability. Carson and Cynthia should have thought of that before they worked with Miesha of all people.

Carson trusts Miesha on this. He came to her with a proposition of being allies and they came to an agreement. Carson believe they decided to be the final four. Miesha on the other hand was rather technical and she realized Carson never mentioned final four. He only mentioned next week. She was fine with agreeing on this because she ultimately has Carson turning on the one person he’s supposed to trust and that will overall weaken game. Then in two weeks, she’ll be back in trying to eliminate him. It seems Shanna wasn’t wrong when she said her former allies are really dumb. The best plotter she had was Chris Ki.

The fight for veto came later. They had to play a matching game and Toderick proved to be the fastest because he won veto. He was naturally going to save Miesha. It was a foregone conclusion and everyone considered it so. But Toderick shocked everyone by giving the veto to Todd. Toderick did this because Carson next nominated Shanna and that was enough for his team. Carson nominated one of his core allies was perhaps the dumbest thing he ever did on the show. He should have realized that Shanna would better hold onto him than the others as a way to safeguard herself if nothing else and he ignored this because his head got turned around by a few words.

It wasn’t even that thorough of a lie. Toderick came up with on the fly and he told Miesha and then they both said the exact same thing to Carson. Neither Carson nor Cynthia realized that the two would of course lie to save one of their own and to make matters worse they also thought they had an agreement to be the final four. Then there was Lamar. Lamar struggled with eliminating anyone and he took the longest time in the confessional. He was so busy on chewing on his nails that he failed to answer the question several times. And once he did answer, he voted to eliminate Shanna along with everyone else.

The vote was heavily in favor to eliminate Shanna. Shanna’s double dealing had turned them all off and so tonight was her last night on the show. She was eliminated. She did her final interview with the host in which she talked about the plan to oust her. She also discussed her final words to the group. She put in a final dig to Toderick because he was so happy about her leaving and she finally admitted she was playing both sides. But she was doing that because that’s what it takes to play the game and it sucks that she was eliminated because others didn’t understand how the game is played.