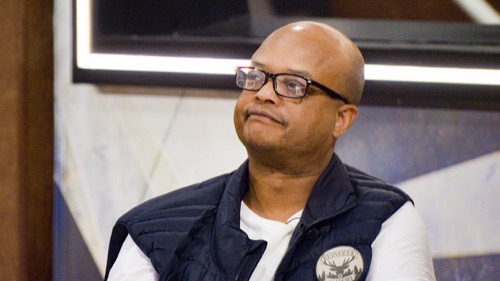 In tonight’s Celebrity Big Brother episode begins with Miesha getting the last laugh. Her nemesis in this game, Carson, had HOH and she managed to stay in the game and turn him against one of his own. Meanwhile, Lamar tells Todd that he thinks they are both going to be put up this week,

Todd doesn’t think so. Everyone is now in the living room, Lamar doesn’t feel good about voting out Shanna tells them. Then he says he was going to get Todd to vote Miesha off and he vote her off as well. Todd can’t believe he said that. Miesha gets up, she is afraid that she is going to say something stupid. Miesha is not worried about her safety, she and Todrick made a deal with Cynthia and Carson.

Time for the HOH competition, the participants gets dressed in their best club outfits. Outside in the backyard the whole place is made to look like a bar – this is the HOH club. In each round the participants will be given a drink and told what ingredients are supposed to be in it. Unfortunately, each drink has one extra ingredient added to it. It’s their job to taste the drink and figure out which extra ingredient is in the cocktail.

When they think they know what the ingredient is, they have to hit the tile off their shelf and lock in their answer. Whoever has the most points after seven rounds clearly has the best taste buds and will be the new HOH. As the new HOH they will be launching their own special HOH drink, and two people will help them launch their ad campaign.

Todd is really shocking everyone because he is doing very well. So far he is ahead to win this HOH. Todd is leading with 4 points, he got every one right so far. Carson says that Todd has been napping the whole time and his winning this HOH is the worst case scenario. Todd wins the HOH and win get to launch his very own cocktail, he picks Lamar and Todrick to be the mascots for his cocktail.

Todrick and Lamar got their costumes, they are attached to each other and dressed up as a cocktail and a lime.

Todd thinks he is controlling the house, but he is not. Miesha is the one controlling the game and pulling his strings like a puppet. Todd is going to put up Carson who says c’est la vie. Todd may have made a mistake, there is a glimmer of hope, if Cynthia wins the HOH, she will take down Carson and Todd will have to put up someone else.

If Todd can get Carson out of the house he has a chance of winning. Carson is convinced that he has hope. Lamar says there is a fire lit in his belly, he is going to win that Veto. Todrick is thrilled, he and Miesha have no blood on their hands, it is all on Todd’s hands. Cynthia vows to be the Veto queen.