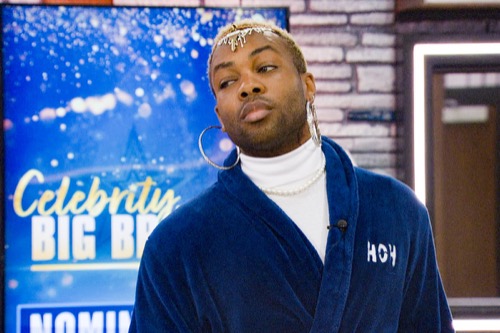 Tonight’s Celebrity Big Brother episode begins with Julie announcing that it is double eviction night. In days, Todd has gone from the penthouse to maybe walking out of the house. Todrick nominated Todd because he feels he is a huge threat, he wins this niche competitions and that makes him a target. Todd knew that he was going to be nominated, he is a little salty, he wants the win the Veto and put Todrick on the block, give him a little bit of his own medicine.

Lamar is close to Todd, he would like to see him go as far as possible. Miesha tells Todrick that it was hilarious, but Todd is pissed that he was put up on the block. Todrick tells Miesha it is the end of the road, there is only one huge target to take out.

Lamar, Cynthia and Todd are talking, Todd feels like he gave Todrick and Miesha all of loyalty and now he is being stabbed in the back by them, they had a final four. Cynthia tells Todd that he played for the wrong team the whole time. Todd says if he wins the Veto he is going to be on the war path.

Lamar is watching Meisha train, he says she looks like she could kick someone’s butt. Later, Todd is with Lamar and he tells him that if he wins the Veto to save himself, don’t worry about him. Lamar says they should just play first and see what happens.

Todrick is going around the house singing about his winning the HOH and Lamar says he is not gracious and the one thing that he was told, win or lose, be gracious. Todrick tells Meisha that he is worried if Todd wins the Veto, Lamar is not a threat but they will have no choice.

The POV is back up for grabs and it is do or die for the houseguests who are dressed up in bob sled outfits and Todd says he looks like a Teletubby. This competition is called Celebrity Luge. Two lugers at a time will compete, the person with the fastest time will move on to play again, the other will be eliminated. By random draw Cynthia gets chosen to go against Miesha.

Miesha wins the first round, Cynthia’s strategy was to have her head down, wrong strategy, it slowed her down. Her safety in the house went down hill faster than her. Miesha chooses for Todrick and Todd to play against each other. Todd beats Todrick. Miesha and Lamar are next, its up to Miesha to take Todd out, but first she has to take out Lamar. Miesha wins, it is now down to Todd and Miesha. Todd wins, he takes out Miesha.

Todd becomes a competition beast in the final hour, but nobody knows that it is a double elimination. Cynthia knows that she is going to be going up, she just hopes that people realize that Lamar is a bigger threat. Lamar is thrilled that Todd won the VETO, he spoiled Miesha and Todrick’s plan. Todrick says the worst of the worst has happened and this is not good for his game, it is going from a cat fight to full blown battle.

Todrick goes to see Todd to see what he is going to do with the Veto, Todd says duh, I’m going to take myself off and if he wins HOH, he is putting up him and Miesha.

Time for the live Veto meeting, Todd uses his POV and takes himself off the block. Todrick puts up Cynthia as a replacement nominee. Lamar and Cynthia give a last few words, Lamar says let the chips fall where they may and Cynthia says she loves everyone. Time to vote, Miesha votes to evict Lamar. Todd’s turn, he votes to evict Cynthia. They have a tie, it is up to Todrick to cast the deciding vote as the HOH. Todrick votes to evict Lamar, shockingly because Lamar can’t win anything in the house if his life depended on it.

Lamar is sitting with Julie, he says he was prepared to get evicted. He says he didn’t really have any allies in the house, he didn’t want to cut anyone’s throat in the end. He bonded with Todd who has been sober for over 30 years and he asked Todd to be his sober coach. He says he learned so much about people in such a short period of time. He realized that mentally he endured a lot, but he feels good about his future. He tells Khloe that he misses her and hopes he sees her soon. He thanks CBS for the platform, he takes his losses and wins graciously.

Julie calls everyone to the living room, the final four, she congratulates them. She says the live finale is two days away, one of them will be the winner. And, only three of them will be going to finale night so another one will be sent home packing tonight, it is double eviction night. Everyone, except for Todrick will play to win the next HOH.

Time for the HOH competition, the power is up for grabs. The winner of this HOH will guarantee themselves a spot in final three. This competition is called “BB Flix Film Festival.” The participants will be shown a series of three movie posters, they will then hear three friends talk about a movie that they want to watch. They have to listen closely, because the audio is their clue and they will have to determine the one movie that will satisfy everyone.

They will have to choose the correct poster. Only the first person to answer correctly will receive one point. Whoever has the most points after seven rounds will be the new HOH. Todd gets a good lead with two points, but Miesha gets a point and is just behind him. Cynthia sneaks in and gets two points. Before we know it, it is a three way tie. This last set of posters will determine who is the winner. Miesha rings in first with the correct answer, she is the HOH.

Miesha has to nominate two houseguests, she chooses Cynthia and Todd. Time for the final Veto competition and this one is called “Frozen In Time,” and here is how it works. Julie will ask them a question about an event that happened in the house this past season. The answer will be the day that event took place. They will have to roll a ball and get It into the correct slot of that day. Get the correct answer, get one point. If nobody gets the answer correct, a point will be rewarded to the person closest to the correct answer. The houseguest with the most points after nine questions will win the POV.

It’s a tough competition and remember these dates are not Cynthia and Todd’s strong points. Todrick has an early lead, Meisha catches up to him and it is a tie. Miesha wins the Veto and has secured her spot in finale night. Miesha doesn’t get much time to decide what she is going to do, but it is an easy decision, there is no way she would use it and put Todrick on the block. Miesha decides not to use the POV. The nominations remain in place.

Time for the live vote and eviction. Cynthia tells Todrick and Miesha that she has so much respect for them and whatever they decide is fine with her. Todd says that Todrick by far played the best game in the house and make whatever decision that he has to. Todrick casts the sole vote to evict, and because he promised Carson on the way out that he would protect Cynthia, he votes to evict Todd.

Todd sits with Julie and he says he really means that Todrick played the best game. He worked the house and did a great job at doing it. He felt betrayed by Miesha and Todrick but he knows it is a game. He doesn’t know who he is giving his vote to, he promised it to Miesha but Todrick played a better game.

Julie announces that since Chris Kattan left the house early, there will only be eight people in the jury. If it is a tie, America will vote for the winner.