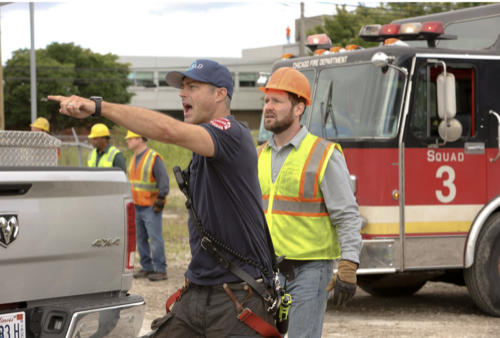 Tonight on NBC Chicago Fire returns with an all-new Wednesday, September 28, 2022, season 11 episode 2 called, “Every Scar Tells A Story” and we have your Chicago Fire recap below. In tonight’s Chicago Fire season 11 episode 1 as per the NBC synopsis, “Javi spends a couple of shifts at Firehouse 51. Kidd and Carver work together to help Carver’s former boss. As Hawkins and Violet’s relationship blossoms, Gallo turns his attention elsewhere.”

Tonight’s Chicago Fire season 11 episode 2 looks like it is going to be great and you won’t want to miss it.   While you’re waiting for our recap make sure to check out all our Chicago Fire recaps, news, spoilers & more, right here!

On tonight’s Chicago Fire episode, Gallo was feeling a little jealous of Hawkins. To be fair, he began feeling jealous of the man as soon as he found out that Hawkins and Violet were together. He showed some improvement when they broke up. Then he helped them get back together. Which brought back feelings of inadequacy. Gallo was now turning to random hookups to make himself feel better and that was when he wasn’t focusing on the job. He and the rest of the station later got called out to a construction site because some down wires were trapping a guy on a rig. Severide went in to go collect the guy. The new guy acted as backup and it looked like Carver was struggling, but he managed to hold on long enough to get both men to safety.

Carver even won Kidd’s respect at the end of the day. He helped save her husband and she wasn’t going to forget that anytime soon. Especially, not once she saw his scar. Carver almost ripped his arm out of the socket and he only did so because he knew the guy he helped save. Andre was Carver’s old boss. There were a lot of firefighters that worked in construction as a second job and Carver was one of them. He got to meet Andre that way. Andre became more than a boss. He was a friend. He showed Carver around the ropes. Carver was hoping to return the favor by saving the man’s life, but sadly it didn’t change things in the long term. Andre’s leg still needed to be amputated.

Once Carver was told, he pummeled something at the firehouse. Luckily wasn’t a person. It was just an inanimate object. Carver took care of the wrists that he injured and he later went to the hospital to visit his friend. Kidd went with him. She wanted to be there to support one of her guys. She realized he wasn’t the same cocky kid from the academy after he saved her husband. She also realized that Chief Boden had been right about Carver and so she partly went with him to the hospital so that she could make up for ever thinking he was a schmuck. But it was a good thing she went with him because Carver learned even worse news at the hospital.

It turns out the construction company that Andre works for was blaming him for the accident. The company was trying to use the excuse that Andre made a mistake in order to get out of paying him worker’s comp and so Andre’s family was in a precarious situation. They were looking at financial ruin without that money. Carver wished he could do something. He just didn’t know what. Kidd tried to help. Kidd called the city. She found out that they told the construction crew beforehand that there were wires there and that the foreman as well as everyone else on the crew was claiming that Andre ignored those warnings.

Something that Carver didn’t believe. He thought something was off. He asked Kidd for her permission in leaving early because he wanted to check out the scene and he wanted to see what they saw. Kidd agreed to it. She also went with him. Together, the both of them realized that the foreman was lying. He put one of the warning flags where they had their fire truck parked and there’s no way that a truck could be sitting on those flags without crushing. The safety flags were put there after the accident. After Andre was saved. After the firefighters cleared the area and so Kidd and Carver caught the foreman in a lie.

Was it enough to save Andre his worker’s comp? Who knows! But they kept working on this case even as everyone else on their team had moved on. Most of the station house was busy helping Cruz. Cruz’s foster son was off of school and he couldn’t leave a kid that small alone. He brought him to work with him. They were treating little Javi like a recruit. They even had him doing tasks around the firehouse. Javi was loving it. He idolized Severide. Severide drives cool cars, has a motorcycle, and pulls off the most dangerous rescues. Cruz was actually getting jealous when Severide noticed and he said he could only do what he does thanks to Cruz.

Which Javi appreciated because he loves Cruz. He said Cruz was his hero. He has been ever since he caught Javi out of a window and so Cruz had nothing to worry about. He eventually realized that himself. While that was happening, Brett finally came clean to someone about breaking up with Casey. She told Mouch. She mentioned she wasn’t ready to tell anyone else. She was still processing it herself and she was doing her best to keep busy. It was a basic rule among those at the station. When in doubt, keep busy. Brett and Mouch did a wellness check on a troubled young man. They didn’t know his sister died.

They didn’t know that there was danger. Brett went in alone and a troubled young man cornered her with a hammer. Thankfully, Mouch showed up in time to save her. She ended up having dinner with Mouch and his wife and his wife knew all about the breakup. She told some war stories about her own dating history.

As for Carver and Kidd, they managed to convince someone on the work site to come clean. The foreman was going down for moving the safety flags and Andre will finally get paid for what happened. Carver and Kidd had bonded over this experience. But it was one step forward, two steps back. She asked him about the scar on his arm because she saw that he had it before he claimed to have gotten it in a picture and Carver would rather turn down a free drink than admit anything about his past.

But Gallo made a serious mistake. He decided to enter a no strings attached arrangement with this girl named Tracy and as it happens Tracy was Hermann’s niece.