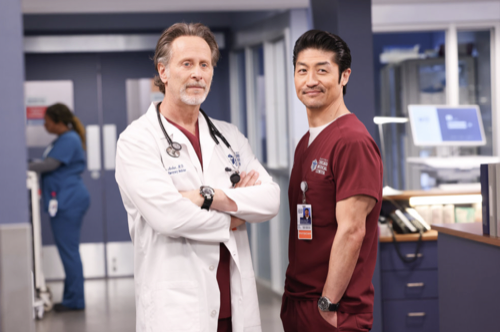 Tonight on NBC their medical drama Chicago Med airs with an all-new Wednesday, May 25, 2022, finale episode, and we have your Chicago Med recap below. In tonight’s Chicago Med season 7 episode 22 called, “And Now We Come To The End,” as per the NBC synopsis, “Will and Hannah clash over a patient in need of a kidney transplant. Crockett is faced with a tough decision when Blake is in surgery. Ethan and Archer treat the son of Med’s general counsel. Med’s family grows.”

Tonight’s episode begins with Milena, whose real name is Jo, was leaving town. She sorta has to know that her cover is blown. Jo suspected that there was a dirty cop involved with the Serbians and it’s a suspicion she’s had for a while. She even started collecting evidence on it. She’s found money or drugs missing after police make a bust. She felt for sure that the dirty cop was involved. But she couldn’t stick around town long enough to investigate herself. She has to leave. She has to leave now. She told her boyfriend where she was going and she gave him all the evidence she’s compiled of the dirty cop’s deeds. She wanted him to take the evidence to his father.

Scott’s father was one of the good cops. Or at least as far as Scott knew and so he vouched for his dad and it was enough for Jo. She handed over the evidence. She told Scott to take it to his dad. Which he planned on doing. He first had to do his shift at the hospital and unfortunately for him, his first patient of the day took most of his time. His patient was Donna. Donna was a frequent flier at the hospital due to her alcoholism. She drinks and then she has accidents. People have talked to Donna. They’ve told her she needed help for the drinking and she ignores all of it. She loves booze more than anything else.

No one was going to change Donna’s mind. She was so drunk that she didn’t even understand it when Scott informed her she has end of life liver failure (due to the drinking) and that her kidneys were also shutting down. Donna told them to put a band-aid on it. Maggie then explained to her how she was dying. Donna didn’t seem concerned then. She just ignored and she tried to go back to sleep. Donna was a mess. The doctors and nurses tried with her. They couldn’t get through to her and so they called in Dr. Charles. Their resident therapist was the best person to somehow get it through to Donna that she was dying.

Dr. Charles talked to Donna. He was able to determine that she was suffering from brain damage from the years of abusing her body with alcohol. This explained why Donna was never able to understand her situation. She was deteriorating really fast because she was still drinking. She never could stick out sobriety long enough to recover and so now she’s dying. The doctors talked to her about surgery and they more or less got her agreement to carry it out. Only it wasn’t enough. She was dying. She has a day or two at most. Scott called her emergency contact and her daughter came to the hospital.

The daughter stayed long enough to yell at her comatose mother for all the years of abuse before she left. Donna was a horrible mother. Her drinking has always been bad and now it’s killed her. she has no one to blame but herself. Another difficult patient was Zach. Zach was a teenager who injured himself while playing some sport or another and now he’s mad because he’s going to miss the rest of the season as well as a recruiter coming to see which teenager was going to be lucky enough to play for their college. Zach, therefore, was angry. He needed someone to blame and he got angry at one of his dads.

This particular dad didn’t like Zach playing sports. He thought it was too dangerous. He was just trying to protect his child and Zach couldn’t see that because he wanted to be angry. He accused his father of being happy that he got hurt. Which was the farthest thing from the truth. His dads didn’t want him to get injured and they were just trying to protect him. Something that Dr. Choi pointed out to Zach. Choi drew on his experience with his dad to say that fathers often say and do things that don’t mean or that they don’t will intentionally hurt their kids and they can be wrong. And yet what matters is if his dad loves him and that was true in Zach’s case.

Donna’s daughter eventually returned to the hospital to be at her mother’s bedside. Her mother treated her horribly and still, the young woman loves her. Zach came to see that his father loved him. He apologized for his behavior and his dad got him into a summer camp where a lot of kids get recruited. Zach was so happy at the news that he was glad to go home with his dads. In another parental story, Dr. Taylor got to meet her biological father. He was glad to find out she went to a good home and he told her to call him Grant. And so that was another happy ending and it wasn’t the last.

Goodwin’s daughter ended up giving birth in a restaurant because their elevator broke down. Goodwin delivered the baby and it was a healthy baby boy.

Also, someone set Halstead’s apartment building on fire. It was a new building. The only people staying there were Asher and Jo. And someone tried to come in and shoot Jo and Scott had to shoot the other guy to save her life.

But Jo ran off. Scott tried taking the injured man to safety and both he and Halstead got trapped in the building. Halstead was only there for Asher. They got along with a patient they worked on together and so they decided to be friends if not something more when this fire happened. And who knows if any of the people trapped inside will survive.