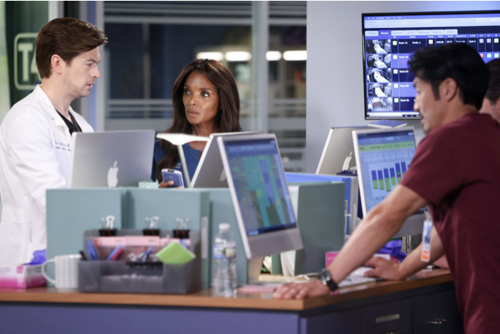 Tonight on NBC their medical drama Chicago Med airs with an all-new Wednesday, October 12, 2022, episode, and we have your Chicago Med recap below. In tonight’s Chicago Med season 8 episode 4 called, “The Apple Doesn’t Fall Far From the Teacher,” as per the NBC synopsis, “When a subway train goes off the tracks, Crockett volunteers to help the victims.

Vanessa and Will must decide if they’re willing to risk their jobs to save a patient. Hannah and Archer clash over a pregnant patient.”

Maggie made up with her husband. He forgave her for not telling him her daughter’s father was back in the picture when it first happened. He also forgave her for seemingly suggesting she still might have feelings for her daughter’s father and so the two of them finally took that honeymoon they always wanted. They ended up going to Paris. They enjoyed themselves. They’re stronger than ever and Maggie is back in the ER. Maggie came back just in time too. The ED doesn’t run the same without her. She also never lets anything get passed her. Like Dr. Marcel’s trick to get his patient into his surgery. It never would have happened on Maggie’s watch.

But while the hospital was Maggie’s domain, she couldn’t control the outside world. There was an accident in the subway. No one knew if it was a bomb or if the subway simply had cracks. The roof caved in and it trapped several people inside. Marcel actually witnessed the event. He had been late to work that morning because the hyper-train had caused derails and he still asked Dr. Archer for an additional hour off because he heard about Dr. Blake. Blake was his ex-girlfriend. She was a killer surgeon. Her career kinda got blown up when she developed a tremor. She named Marcel as her medical proxy during her surgery to correct the tremor, but Marcel didn’t tackle the issue.

Marcel thought it was too much of a risk. He played it safe. The tremor remained. Blake blamed Marcel for her career tanking and she ended things between them. Now, Blake is supposedly back on her feet. Only she wants to transfer to a different hospital. She wants to go work at a hospital in Boston. She didn’t even tell Marcel she was moving away. He had to hear about it from the hospital grapevine. Marcel then rushed out to go over to Blake’s apartment to see her when he ended up witnessing smoke come out of the subway and he went down there to go check on any victims. He ran into two people trapped inside. And one desperately needed surgery.

The guy that needed surgery was named Nathaniel. Nathaniel was suffering from internal bleeding. He needed immediate surgery and so when the Chicago Fire Department arrived – Crockett told them to get him supplies off the ambulance as well as supplies from his hospital. He was going to perform surgery on Nathaniel right then and there. It wasn’t exactly a sterile environment. But Crockett was making it work while back at the hospital there were other emergencies to deal with. Dr. Charles came in with his new therapist, Dr. Greenwell. Greenwell began complaining of chest pains during Charles’s appointment. And he collapsed.

Greenwell collapsed right into the glass coffee table. He needed treatment for that on top of getting treated for those chest pains and that’s why Charles had him rushed to Chicago Med. Then there was Drs. Halstead and Taylor’s patient. Rose had a fungus infection. She needed a certain kind of medication to treat it and they couldn’t get it because it was in shortage. The whole medical system was experiencing shortages across the board. Archer had to play it safe with what he had. It’s why he told Dr. Asher to try and diagnose her patient without a CT. There wasn’t enough dye for everyone. Plus, he thought Asher’s patient was suffering from a kidney infection and didn’t need a CT at all.

The hospital was doing its best to stay open as it is. They have to make their cuts where they could. There was also the fact that Archer wasn’t exactly a big fan of Asher. Asher was a drug addict. It didn’t matter that she was now sober. She will always be a problematic addict in his eyes and there was a reason for that. His son was an addict. Archer cut off his son when he seemingly lost Shaun to his addiction and thankfully the two were able to regain contact after fifteen years. But that doesn’t mean Archer trusts, Asher. He made her jump through several hoops and for her patient to go on a downturn before he approved the CT. He never would have done that with other doctors.

Charles meanwhile needs to find a new therapist. His current therapist was suffering from panic attacks and that’s what he thought was a heart attack when it wasn’t. Greenwell thought he might have a fatal disease called Sporadic Fatal Insomnia. He hasn’t gotten diagnosed or anything. He just thinks he has it and that was enough to panic him. So, Charles suggested getting tested for it. It would be the only way to solve things. His not know what was causing the attacks and so the truth shall set him free. Charles ordered the test. The results came back that Greenwell didn’t have the disease and so Greenwell tried to quit as Charles’s therapist.

Greenwell thought Charles wouldn’t want to keep seeing him now that he sees the man behind the curtain, but Charles surprised him. Charles has a newfound respect for Greenwell. He wants to continue seeing him as a doctor and so Greenwell agreed to it. But Asher’s patient getting a CT helped save her life. It also finally won Asher some newfound respect. Archer realized he should have never questioned her and he decided to forgo her routine drug checks. She doesn’t have to do them anymore.

Halstead and Taylor bought the medication they needed for their patient on the black market. They didn’t administer it. They left that up to Rose’s husband and the husband gave her the prescription.

As for Crockett, he kept Nathaniel alive and he befriend a billionaire down in the subway. He also injured himself. He should have gone directly to the hospital and he chose not to because he wanted to see Blake. And sadly it was too late to apologize, she left Chicago that morning.