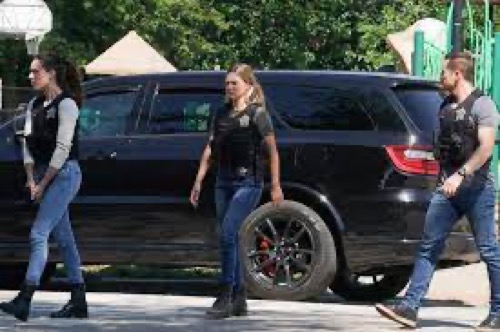 Burgess and Ruzek were facing a credible threat to the custody of their adoptive daughter, Makayla. Makayla’s biological uncle had found out about her and he wanted custody. He even felt he had a right to it because Makayla was black. As was he. Burgess and Ruzek were not. They were white. They were also cops and so that didn’t play well during their custody hearing. They had to justify their jobs and why they took Makayla in. They had to justify every action they ever took with the little girl and after all of that, there was still a chance they might lose custody because they weren’t a blood relation. Somehow blood meant more than people that have gotten to know and love Makayla.

It wasn’t fair. No battle ever is and that’s what the custody hearing was. It was a battle over Makayla. If her uncle had perhaps approached Burgess and Ruzek, maybe they could have worked it out. They could have agreed to visitation instead of this. Only Theo Morris didn’t want visitation. He and his wife wanted full custody. They felt it was their due. They were wealthy and it didn’t matter that they had no prior relationship with Makayla or that Makayla’s biological father was in prison serving a life sentence. All that matters is two good families wanted her and it was up to the judge to play Solomon.

Burgess and Ruzek’s professional lives had also taken a turn. They started working what they thought was a gang killing and it turns out they were looking for a serial killer. It became clear once the second body dropped. The serial killer was hacking people up and writing words in their blood on the wall nearby. Intelligence was on it. They started looking for their killer and it wasn’t wrapped up in a day or two. In the meantime, Makayla had wanted to do her hair up in braids like a picture she saw. She and her friend wanted to do it. The friend had a black mother and Makayla had Burgess.

Burgess tried to do the hair like the photo. It didn’t work out. She called Atwater. He knew someone who could do the hair and so they went over to his place to get it done. It was moments like that, that Burgess wondered if she was going to be enough for the little girl. She talked to Atwater about it. He told her that Makayla loves her and that was never going to change. It’s been Burgess that’s been taking care of her, helping her with her homework, and being there to cheer her up after her nightmares. Burgess shouldn’t just dismiss that because of race. She may not be black but she was Makayla’s mother.

The case with the serial killer however took an unexpected turn. The killings seemed to be tied to a cult being run by a man named Micah Thurman and he targets women who were down on their luck and vulnerable. The team found out about it thanks to a guy named Dan. Dan was looking for his sister. She took his car and he thinks she return to her cult. He told the police all about the cult after they said his car was spotted in front of a crime scene. They later found the sister, Jackie. They tracked the car and they spotted her going into a store. They arrested her. They held her and questioned her and the woman was completely conned.

Jackie claims Micah freed her of fear. She said she was a part of his family now. She even tried to sell Burgess on the idea of joining this family and Burgess had to turn it down. Later, Burgess heard from the court that Theo and his lawyers were going after her medical file. They tried playing the race card and now they want to play the cop card. They want it known that Burgess’s job is dangerous. They were probably going to find out that she almost died on the job and that she turned down desk duty in order to return to work in Intelligence. Burgess freaked out after she learned they were accessing her medical file.

Burgess felt for sure that she would lose custody. She thought that at least she has the job and so she did her best to get through to Jackie. She told Jackie what all three victims had in common. They had all made Micah mad at one point. One turned him down a second mortgage, the second gave Micah a loan at unfavorable interest rates, and the third had been a creditor. Micah had convinced the women that the family was in danger. He talked Jackie into driving around another woman by the name of Jenny and Jackie never went into the houses or saw the crimes. She also never saw Jenny with blood on her.

Burgess broke through to Jackie. She talked the other woman into seeing how much of a villain Micah truly was and so they put a wire on Jackie and they told her to return to Micah. They wanted to catch him on tape admitting to the murders. The plan didn’t work. Jackie tipped off Micah and he was making a run for it when the officers came bursting through the door. They captured Jenny. And in the end, it was Burgess who shot and killed Micah by using something she got from Makayla.

It was being reminded of her daughter that made Burgess fight all that much harder in court. And she later learned that she won custody of Makayla, but as she and Ruzek were returning to the apartment, they saw the nanny had been attacked and that Makayla was missing.