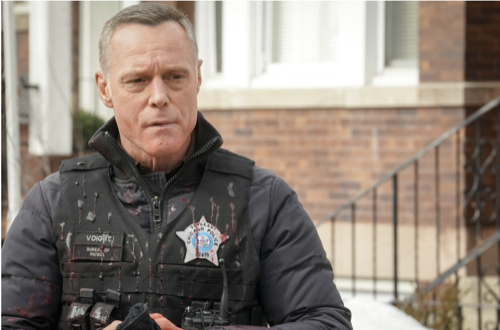 Despite the increasing danger, Voight helps informant Anna Avalos get even closer to their target.”

In tonight’s Chicago PD episode, on the surface, Escano runs a string of bakeries. The police however knew that Escano was secretly running a cartel as well and that the bakeries were merely a front. Escano is a dangerous man. He’s killed people. He’s ordered his men to kill people. He also doesn’t let anyone get close to him. He doesn’t have friends or family or even a girlfriend. No one walks through his front door. His private life is shrouded in secrecy. Anna couldn’t use cheap sex to get close to Escano. She was going to have play things better than that and so she started off by getting a job at the bakery. It kept her in Escano’s vicinity. She got to watch and monitor him. And she was there when a shooter took out some guy in front of the bakery.

Anna didn’t break cover. She came out of the bakery asking if anyone needed help and she and Upton pretended not to know each other. The cops had also been nearby during the shooting. They quickly came onto the scene and they got the victim to the hospital for his multiple gunshot wounds. The cops also checked on the victim’s girlfriend. She’s pregnant. She’s far along and was mercifully spared any bullets. Everyone was rushed to the hospital. The baby mama was asked about her boyfriend and she was clear when she said this wasn’t a gang shooting. Her man had left the life.

He turned over a new leaf after he left prison. He was now solely focusing on her and the baby. The police had seen the assailant. They had even gotten some rounds off and one round made it into their shooter’s side. How do they know this? Because the shooter came back to the bakery at night. He needed help and they couldn’t take him to the hospital because all gunshot wounds will be reported. Escano and Anna were the only ones there with the guy. Escano wanted to cauterize the wound by the man hurt. But Anna refused to let that happened. She stepped in. She sewed up the wounds.

Anna had asked for help the whole time she was doing it. She didn’t ask for help from Escano. She asked Voight and his team to step in. Yet, they refused to do so. They didn’t step in because Anna hadn’t asked for their help by using the safe word. They figured if she hadn’t then she was fine. They also wanted her to exploit this opportunity to get close to Escano and she did. She took him to task for bringing a man with a gunshot wound to the hospital. Escano basically assigned her to the young man. She even had to help him home. Anna learned about the young man when it was just the two of them. She learned that his name is Adrian.

Adrian was very close to Escano. He said Escano has been looking out for him since he was fourteen. Anna asked him why he shot the other guy much less do it in front of the bakery. Adrian implied that he did it for love. Voight and his team looked into Adrian. Adrian has been in trouble his whole life. He lived a few houses down from Emy. Emy was the pregnant girlfriend of his victim from earlier. The team came to suspect that Emy and Adrian had a thing. It ended badly and Adrian killed her new guy rather than let them be happy together. The team went over to Adrian. They plan on questioning, but he surprised them by pointing a gun at himself.

Voight tried to talk him down. He did everything he could to get the gun away from Adrian and Adrian still killed himself. But before he did so, he kept saying that he had to do this. That he had been told to do this. Voight couldn’t stop him from killing himself. The most Voight could do was prepare Anna. Anna was told about Adrian. She was tried to pass her condolences off to Escano. He didn’t seem to care for it. He also told her that he knew who she is. He knows her whole family history and that she has a son. Escano also said he knew she knows about his real business. And that in spite of everything, she’s still there.

Which is true. Anna isn’t going anywhere. She was working with Voight to take Escano down and the more dangerous it became the more she and Voight tried to stay one step ahead.