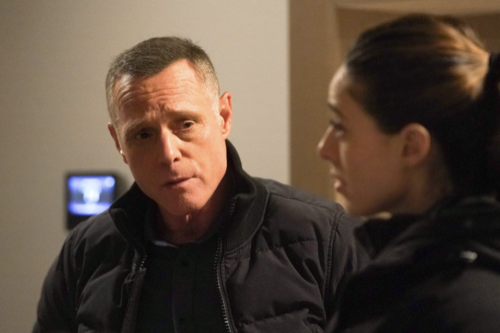 Tonight on NBC their drama Chicago PD returns with an all-new Wednesday, April 13, 2022, season 9 episode 19 called, “Fool’s Gold,” and we have your Chicago PD recap below. In tonight’s Chicago PD season 9 episode 19 called, “Fool’s Gold,” as per the NBC synopsis, “After the murder of a wealthy Chicago man, Atwater, and the team digs in to uncover the truth, suspecting there is more to the story than meets the eye. ”

In tonight’s Chicago PD episode, Detective Atwater had seen police pounding on a door in his area. He went there to assist them and that’s when they noticed that the house had been ransacked. They went in the door hoping to capture whoever did that. But they didn’t find them.

They instead found one body and the man’s wife. Her name was Raquel. Raquel had been shot and she was rushed to the hospital. Her injuries weren’t life-threatening. She was later able to answer questions. She said she came home to find two men in masks beating up her husband. They shot at her. She ran. She went to go hide in the attic and that’s where she was until the police found her.

Raquel was beating herself up for running away. She saw them hurting her husband and she ran away. Her husband was later killed. Something she thinks she could have prevented if she had stayed, but Atwater assured her that there was nothing she could have done to save her husband.

The late Brent Landry was a wealthy man. They lived in an affluent neighborhood. This same neighborhood had also been hit by two thieves matching the description once before. There had been no casualties the first time because the family had been out of the country and so just thought Brent got unlucky.

With Atwater’s involvement, Intelligence took over this case from Robbery. They worked the scene and they identified the two-man running in masks to a description that Raquel gave them. But then they got lucky again. The thieves hit the third house and the police were quick to respond.

They almost got them when they ran out of luck. The thieves made their escape by car. There was nothing the detectives could do about it and so they searched what they found at this newest crime scene. They found out that somehow the thieves had written down the alarm codes. How did they get the alarm codes? Everyone was wondering about it.

Voight and his team looked into a connection between the three households. It turns out it all led back to Raquel. Raquel owned a boutique interior design firm. Her company was hired by the other two houses that were hit and it was only at Raquel’s house that her husband was killed.

He was the only casualty in all of this. The team tried to talk to Raquel. Only she wasn’t at home. She wasn’t at the hospital. She wasn’t even at her office. She was found in the airport about to board a flight out of town. The police stopped her and brought her in for questioning. It turns out Raquel’s real name was Raquel.

“Raquel” had several fake IDs as well as passports. She was the one connection between all the robberies and it was only her husband that was killed. Everyone came to believe that Raquel played a part in the robbery/murder. They grilled her. They questioned her for hours and they got nowhere with her.

They instead found out all they needed to know from the guy who makes her fake passports. This man admitted that Raquel was on the run. She had an abusive boyfriend and so she travels a lot. She never puts down her roots because one way or another he always finds her. And Raquel was so terrified of this man that she later admitted she gave him the alarm codes.

She only did this to convince him to leave. She wanted this man out of her life and he was refusing to go. He’s known her since she was fifteen. He became when she turned eighteen. Almost as if he needed her to be a legal adult before he started playing mind games with her. Raquel has been on the run from him for years and so when he finally found her living as Raquel – he demanded a slice of her perfect life. He threatened her. He made her give up the alarm codes and then he turns around and kills her husband. He did that last part to say “if I can’t have you, no one else will”. And so Atwater convinced Raquel to tell her truth.

She ended up telling him everything. The abuse. The constant traveling as a means of escape and how she thought she put that life behind her when she met Brent. But there was one thing that needed to be cleared up. The team had gone looking for their murderer and they later found him telling a completely different story than what Raquel said. If Raquel hadn’t kept all of her burner phones, the police would never have been able to prove she had a stalker and that he was threatening her life and her husband’s life if she didn’t comply. And in spite of all of that, the man still went to murder her husband.

And so he was going to prison. He’ll be there for the rest of his life and Raquel will finally be free.