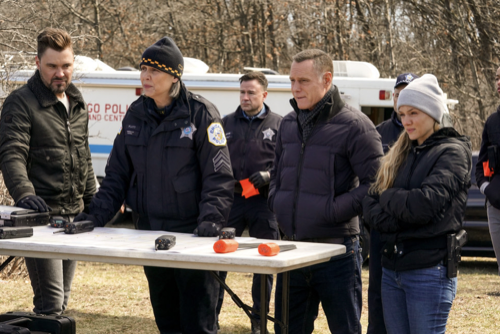 Tonight on NBC their drama Chicago PD returns with an all-new Wednesday, April 13, 2022, season 9 episode 20 called, “Memory,” and we have your Chicago PD recap below. In tonight’s Chicago PD season 9 episode 19 called, “Fool’s Gold,” as per the NBC synopsis, “Voight and the team delve into a cold case in search of clues to solve a shocking new crime.

With its focus on buried memories, the case sparks concern for Burgess and Ruzek about Makayla’s mental healing. ”

In tonight’s Chicago P.D. episode, someone played with his victims before he killed them. The victims were an old married couple. They lived in that house for years without incident. The killer broke into their place, made them food, stayed with them for hours, and made them bathe in bleach before murdering the couple. The couple were even posed after death. It was such a weird case. The detectives have never seen anything like it. Yet, this killer must have done this once before. The killer knew how to clean up the crime scene and he didn’t rape either the Mrs. Grace or her husband. He just played with them. Both literally and figuratively. There had been a board game involved.

Voight and his team caught this case. They investigated any similar cases. The only lead was with a young boy who went by the name Daniel. Daniel was three years old when he was found running. He said that a man told him to run after breaking into their RV and playing with his parents. This man had made his parents bath in a funny smelling bath. Daniel had to take bath as well. He said it hurt. He remembers crying and being told to stop. Daniel was just three and so he didn’t remember anything else. Or to better put it, anything useful. The detectives working his case had thought it was made up and that Daniel was telling them stories.

Back then, the cops suspected that Daniel had been traumatized by abuse. They believed he made up a story that would be better for him in the long run and so they brought in plenty of child psychologists. It was only one of them that suspected Daniel could be telling the truth. Voight and his team tracked down Daniel and they asked him if he was willing to answer questions. Daniel is now an adult man with a wife and kid. He’s done a lot to put his past behind him. He wasn’t too sure about talking about it again until they told him that the killer has struck again. They told him about the Graces.

The similarities in the cases. How what Daniel remembered wasn’t made up. That’s what convinced Daniel to help the police. He told them everything he remembered about the last time he saw his parents and how they were young and good looking. He told them how he remembered being loved. He doesn’t think he was abused like everyone kept telling him and the team now believes him because they’ve seen the new murders. But the team later understood why no one believed Daniel. His story sound made up. He remembers pink snow falling from the sky and how they played board games after the man came into their house.

Burgess remembered the pink snow thing most of all. She went into the Graces’ home. She went into the attic and she found pink installation padding. She realized then that the killer had hid in the attic. He probably waited for the couple to come home and then revealed himself once he was ready to take them hostage. Both the Graces’ house had the same pink installation padding as the one that Daniel remembers from almost thirty years ago. It’s likely the same crew might have worked on them and so the team looked into that angle. They investigated who built the Graces’ home. It was built by a construction company called Age One Construction.

The team looked into each and every house in the city built by that construction crew. They came across a man with a long record of being a peeping tom and getting protective orders out against him. His name is Jim Wheaton. Wheaton was a carpet installer and he worked on the Graces’ home. Wheaton also came from a troubled childhood. He was physically abused for the first eight years of his life by his parents and he was only removed from their care after he tried to take a baseball bat to his mother. Ever since then, Wheaton had been spying on happy parents. He was doing his best to redo his childhood with them. Its why he always targeted parents.

But the team didn’t have any physical evidence of Wheaton’s guilt. They tried to get him to talk and he refused to do so. He remained the silent the whole time. He knew that the team didn’t have anything against him and so that’s when they came up with the radical idea of looking for mistakes. Not mistakes with his current murders, but mistakes in the murders of Daniel’s parents. For example, take Daniel. A pro wouldn’t have let him live and Wheaton did so because this was his first murder and he made mistakes. The team had Daniel looked at pictures of every site where Wheaton worked. He remembered a motel. The team went there and they found a woods nearby.

In the woods, there was an old RV. It belonged to Daniel’s family. His parents’ names were Mark and Isabella. They were identified by the dental records. They also left behind an old camera and so the team later gave the old footage to Daniel. And he got to see a younger version of himself with his parents and see how much they loved him.

The team found Wheaton’s DNA all over the crime scene. They officially arrested him and the only thing he had to say was to ask Burgess if she’s a good mother.

But Burgess and Ruzek later talked about moving in together and there’s no telling where that’s going to go.