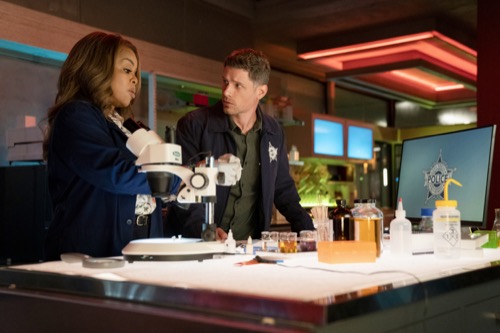 Tonight’s season 1 episode 10 looks like it is going to be great and you won’t want to miss it, so be sure to tune in for our live coverage of CBS’s CSI: Vegas recap at 10:00 PM EST! While you wait for our recap hit the comments and let us know how excited you are so far with this season.

Tonight’s CSI: Vegas episode begins with Catherine and Maxine who asks her why she wants to come back to CSI. Catherine says the job is in her blood and she is shorthanded. Catherine recently got kicked off the board of Eclipse.

Maxine and Catherine are on a case, arrive and Josh is already there. The victim, Lynn Zobrist, the housekeeper found her, and she has been dead for about 36 hours, there are no prints on the murder weapon. Maxine and Catherine walk towards where they hear music playing on a loop and enter a room of glass, there is blood smeared from the victim to that floor of the room.

Josh takes fingerprints from the housekeeper. She says that Lynn was always so sad. She tells Serena that she made her come last year for Thanksgiving with her family. Serena wants to know if she ever knew her clients were, she says no, but she knew what she was doing.

Beau is trying to take off the mirrors from the floor, he manages to get them off and there is blood underneath, a lot.

Chris is working on the DNA tests and is with Josh, he talks about Catherine coming back.

Penny is going over photos of the victim when Maxine comes in, Penny says she is looking at Lynn’s social media. The day before she was found she had conversations with several people on her phone. Maxine tells her to call them all, they are going to need DNA and prints on all of them. Anyone who refuses goes to the top of her list.

Josh is trying to go over the evidence, he starts with the furniture that got dragged into the hall. Catherine is there and she gets a text message from Benny, “Alonso headed to Fremont.” She tells Josh that she has to go.

Catherine is out but gets a call from Maxine, they got most of the mirrors down, and they found a little surprise, signs of another attack. It is all Lynn’s blood, but a person can’t have that much blood.

Chris picks up Allie so she can go to the crime scene. Josh tells Allie that the blood is all from Lynn. Serena walks in the room and introduces herself. Allie uses a program with lasers, to make a 3D map of the crime scene to separate all DNA evidence, each suspect gets their own color.

Her hair was soaked in blood, she was dragged.

Maxine tells Catherine that Penny is going to line up interviews with all the people who left DNA but there is one woman in particular they are going to speak to, a psychiatrist. She was in Lynn’s home. Serena goes to see the doctor, she says she just wanted to restart therapy and didn’t say why. She worried that BDSM was the wrong career for her. Serena says that Lynn was hurt on the job five years ago, she shows a photo to the doctor who says the marks on her head are old, from ECT, a type of electro shock, Dr. Sarkesian was doing them. She an attachment disorder and major trust issues. She tried to pursued her to go to the cops when Miguel Sanchez hurt her and she refused, he is dead now, cancer. The doctor asks what the killer did to Lynn and she says she can’t see that. Serena asks if mirrors were special to Lynn.

Catherine and Maxine are taking samples from the guys, one man has a cut on his hand, he says it happened when he was building a tree house with his son.

Catherine and Josh go in the backyard to see if they can find clues. They find some stuff in a fire pit, looks like a piece of furniture that was broken and thrown inside. They brings some pieces back to the lab and Beau goes to work on them. They find some ingredients that may be from skin cream and Maxine remembers that one of the men they interned was scratching, his name is Alan Herskovitz. They head to his place and he is a huge hoarder. They find a broken mirror and a piece taken out of it. Allie finds a board behind the mirror with photos and she says they got this guy wrong. He is not a crazy client mad at his dominatrix, he is hunting people. Josh says they have to find him now.

They almost find him, but he gets a away, but drops a rag full of blood and he was after someone else, a man. They question the man and he had the same marks that Lynn had on her head. He was also seen by Dr. Sarkesian and he says there were mirrors everywhere in the room.

The rag is taking back to the lab, Turns out the rag has DNA from an infected wound. When Lynn was fighting for her life she must have hurt him. The rag smelled, which means that Alan needs medical care.

Alan had the same therapy as Lynn, Catherine and Maxine find him at a hospital. They’ve got him, Alan says it is not over, the voice will never stop. It spoke to him, it choose him.

Later, Maxine asks Catherine whey she is back, she says Grace won. She got her a job at Eclipse, her grades took off. She has been missing for three weeks, there is no investigation and that is why she is there. Nobody at the Eclipse even seemed to care.

Then, we see somebody bring a body that looks like Grace.