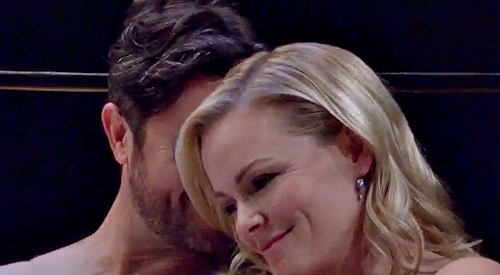 Days of Our Lives spoilers reveal that Shawn Brady (Brandon Beemer) and Belle Brady (Martha Madison) have a heart-to-heart. It sounds as if “Shelle” will get back together, especially since he isn’t the father of Jan Spears’ (Heather Lindell) baby. Once Shawn and Belle reunite, they could end up with a shocker. Could Belle get pregnant and have a who’s the daddy storyline?

DOOL spoilers reveal that Shawn is dealing with Jan giving birth to his baby after being tricked by the devil. However, viewers just got confirmation that Shawn isn’t the baby daddy after all.

From the moment Jan met Christian Maddox aka Evan Frears (Brock Kelly) in the prison infirmary, the paternity lie was planned. In an unexpected twist, Orpheus is working with Jan.

As Jan continued to use the baby to drive a wedge in Shawn’s marriage, Belle began getting closer to EJ DiMera (Dan Feuerriegel).

Despite Belle’s better judgment, she ended up sleeping with EJ. However, fans are expecting “Shelle” to reunite, which is going to happen very soon.

Days of Our Lives spoilers reveal that during the week of July 4, Shawn and Belle have a heart-to-heart.

It is also teased that Jan lures Shawn to the docks around the same time that Ben Weston (Robert Scott Wilson) and Ciara Brady Weston (Victoria Konefal) get ready to set sail on “Living in CIN.”

It sounds like Shawn and Belle get back together but Jan somehow gets her obsession to meet with her.

There will probably be a crazy showdown and by that time, Shawn will find out that he’s not the father of Shawn Christian Brady.

After Shawn and Belle reunite, they will likely end up in bed. However, many times in soaps, when a character sleeps with someone else, they usually end up pregnant.

Since Belle just got wild with EJ, could she end up with an unexpected pregnancy?

This would lead to Belle struggling to find out which man fathered her child.

If EJ gets fixated on making Belle his forever, he could tamper with the paternity test. Soaps seem to love the paternity switcheroo storyline.

At some point, the truth will come out. That will ultimately lead to Shawn losing one child but gaining another.

It will also put a damper on Jan’s declaration that she was able to give Shawn what Belle couldn’t… a son.

Do you think Belle will end up with a who’s the daddy storyline? If Belle ends up pregnant, who do you want the father to be?