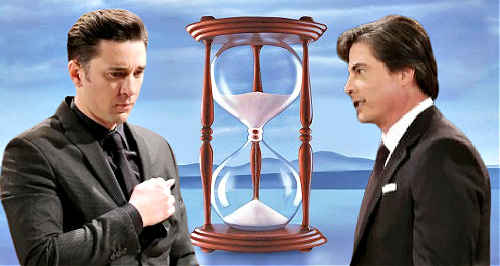 Days of Our Lives spoilers reveal that Sami Brady (Alison Sweeney) and Lucas Horton (Bryan Dattilo) have their wedding during the week of July 11. As “Lumi” get ready to tie the knot, Chad DiMera (Billy Flynn) makes a realization about Abigail DiMera’s (Marci Miller) killer. With Flynn hinting Chad wants to be the executioner, could he be responsible for Sami’s wedding horror?

DOOL spoilers reveal that Flynn spoke to Soap Opera Digest about Chad’s grief. The actor said that Chad won’t be able to let Abigail go until the killer is brought to justice.

Flynn also said that Chad wants to be the judge, jury, and executioner.

While Chad will go through a lot of different emotions as he mourns Abigail, his rage could spiral out of control.

The longer that Rafe Hernandez (Galen Gering) takes to arrest the right killer, the more infuriated Chad is going to get.

So, Chad could decide to take matters into his own hands if he thinks he knows who killed Abigail.

Chad is getting support from his family and friends, including EJ DiMera (Dan Feuerriegel). EJ suspects that Lucas framed him for kidnapping Sami. However, EJ can’t prove it.

It is teased that EJ will make a surprising confession to Chad. This could reignite Chad wondering if Lucas killed Abigail.

Chad had this suspicion in the beginning, but Kate Roberts (Lauren Koslow) assured him that Lucas wasn’t responsible.

So EJ’s confession could lead to Chad thinking that maybe his first instinct was accurate.

Days of Our Lives spoilers reveal that Lucas already wonders if he could be guilty.

Even though Lucas didn’t have Abigail’s stolen jewelry, he still can’t remember what happened that night. It’s tearing Lucas apart.

It is teased that Lucas will make a confession to Will Horton (Chandler Massey).

Lucas probably tells Will that he got drunk and blacked out the night of Abigail’s murder.

Of course, Will could feel torn as Lucas is his father, but he’s also close to Chad. So, Will might mention to Chad that Lucas wonders if he could be responsible.

It is teased that on Monday, July 11, Lucas confesses to Chad.

On Tuesday, July 12, Chad has a shocking realization about Abigail’s murder. Then on Wednesday, Sami’s wedding is turned upside down.

As the week of July 11 continues, Chad will make an accusation. So, it sounds like Chad will be the one to crash Lucas and Sami’s wedding.

Despite it looking like Lucas could be guilty, it is clearly a red herring.

If Chad does try to serve as executioner, he might do the unthinkable to Lucas at the wedding after accusing him of murdering Abigail.

Since Abigail was stabbed, could Chad try to do the same thing to Lucas? How will Chad feel when he realizes that Lucas isn’t the person who murdered Abigail?