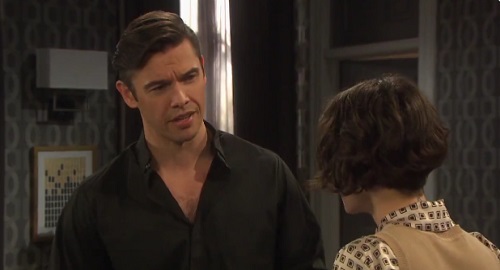 At the Kiriakis mansion on Friday’s DOOL episode, Maggie Kiriakis (Suzanne Rogers) walked in on Alexander “Alex” Kiriakis (Robert Scott Wilson) with a woman in his bed. Maggie was surprised over Alex meeting someone so quickly, but he suggested he was a people person.

Alex introduced Maggie to “Laura,” but she corrected him since her name was Lisa. Even so, Lisa happily handed over her number – leaving Maggie amazed that she was still interested. Alex shrugged it off since he was very good at what he does.

After Alex got dressed, he joined Victor Kiriakis (John Aniston) and got called out. Victor suspected that Alex was after Sonny Kiriakis’ (Zach Tinker) job and knew Alex was the one who snatched up the company that Sonny missed out on.

Alex denied going after Sonny’s position and explained that he intended to flip the company back to Titan on better terms.

Once Alex insisted he was trying to be helpful, Victor decided he wouldn’t spill anything – though Alex would have to be his fixer and report back from now on. It occurred to Victor that maybe Alex wanted that arrangement from the start.

At Allie’s place, she admitted she still felt bad for Johnny, but she wanted to have a nice night in with Chanel Dupree (Raven Bowens) anyway.

Out-on-bail Lucas Horton’s (Bryan Dattilo) arrival interrupted their evening, so Chanel made herself scarce so that Allie could talk to her dad.

Allie blew up at Lucas for kidnapping Sami Brady (Alison Sweeney), but he wanted to tell her about his hypnosis and how he knew he wasn’t Abigail DiMera’s (Marci Miller) killer.

There was also talk about Lucas’ not guilty plea, which was to avoid making matters worse for himself when he was on the hook for Abigail’s murder. Lucas wanted to make things right with Allie, so she suggested he needed to prove it with his actions.

In the town square, Johnny refused to accept defeat and pushed Paulina Price-Carver (Jackée Harry) to help him with a plan to win Chanel back. Johnny suggested they should arrange a misunderstanding and make it look like Allie committed some unforgivable betrayal.

Unfortunately, Chanel overheard and quickly blew up at the schemers for trying to destroy her relationship. After Chanel declared that she hated them both, she stomped off – leaving Paulina to chase after her.

Chanel pushed Paulina to admit that she wanted her to end up with Johnny because he was a boy. Paulina finally confessed she indeed wanted the Chanel to live the dream life with the picket fence, babies and everything.

Chanel argued that Paulina was clinging to an outdated vision of a traditional relationship and still felt she could have all the same things with Allie.

After Chanel pushed for Paulina’s support, she insisted she didn’t want to lose her mother. Paulina confirmed that Chanel wouldn’t and pulled her into a big hug.

When Paulina crossed paths with Johnny again, he still felt they could salvage the plan. However, Paulina made it crystal clear that she wouldn’t be plotting against Chanel’s romance.

Once Chanel returned to Allie’s apartment, she asked how things went with Lucas. Allie hinted about a big decision Lucas had made – and elsewhere, Lucas called his lawyer to reveal that he wanted to change his plea back to guilty.

Next on Friday’s Days episode, Xander and Sarah broke in Gwen Rizczech’s (Emily O’Brien) motel room, where they promptly found the Sarah mask in her suitcase.

When Gwen showed up at the door moments later, Sarah and Xander had to hide in the bathroom. Since Xander and Sarah left the mask behind, Gwen grabbed it and headed out to the dumpster to dispose of the evidence.

That left Sarah and Xander without the proof they needed, but they went dumpster diving soon after. Xander and Sarah couldn’t find the mask despite their best efforts, so they eventually got cleaned up and settled on trying to prove Gwen escaped from Statesville.

Back with Gwen, she got a visit from Leo Stark (Greg Rikaart), who revealed he pulled the mask out of the dumpster after spotting her. Leo pushed Gwen to make a confession, but Gwen stayed tight-lipped and got Leo to leave the mask behind as he departed.