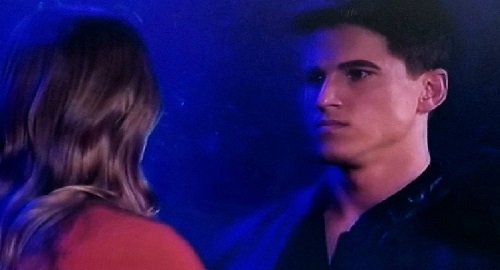 Days of Our Lives (DOOL) spoilers recap for Friday, May 13, reveals that Charlie Dale (Mike Manning) was able to rise from the grave and became Baby Bo’s new dad under the devil’s orders. Allie Horton’s (Lindsay Arnold) transference began as Ben Weston (Robert Scott Wilson) and Ciara Brady Weston (Victoria Konefal) rushed to stop her, so here’s how all the DOOL action went down.

In the cemetery, Allie summoned Charlie up from the depths of hell and explained why she’d chosen him. Charlie pledged himself to the devil’s mission, so possessed Allie filled him in on her plan to enter the baby’s body and shape his soul.

By the time this child was a grown man, the devil intended to wreak all kinds of havoc. Possessed Allie pointed out that Charlie had been robbed of his child, so she wanted him to take the baby and raise little Bo as his own.

Allie prepared a creepy transference ritual with the baby at the center of a pentagram while Ciara said a prayer in her hospital room. Ciara hoped Bo Brady (Peter Reckell) could help look after his grandson, but she soon had to turn her attention to Evan Frears aka Christian Maddox (Brock Kelly).

Evan threatened Ciara with a scalpel before she tried to hit him with a tray. There was a struggle as Evan attempted to strangle Ciara, but Ben ultimately launched a counterattack.

After Evan got the upper hand and started choking Ben, Ciara was able to knock Evan out and stop him. Shawn Brady (Brandon Beemer) showed up to arrest Evan once he regained consciousness, but Evan pointed out that the devil was probably already in control of the baby’s soul by now.

At the DiMera mansion, Susan Banks (Stacy Haiduk) encouraged Johnny DiMera (Carson Boatman) to use his twin vibe and try to get through to Allie again. Johnny felt a jolt and dropped the twin pic he was holding, so Susan thought devil had broken their connection.

When Marlena Evans (Deidre Hall) arrived, Susan suggested they now had backup against the devil. Johnny, Allie and Marlena gathered together to reach Allie, who spoke to them after the lights flickered and the wind whizzed in.

Allie was able to reveal that she was in the cemetery, so Johnny took off in that direction. Meanwhile, Marlena’s phone call sent Ben and Ciara to the cemetery as well.

Charlie wondered what he should do with Allie after the transference was complete, but the devil didn’t care once he was done using her body. Johnny then rushed over to protect Allie and recognized Charlie as his sister’s rapist due to a picture he’d seen.

After Johnny went for the kill, he lost the fight and ended up unconscious on the ground. Allie was ready to move forward with the transference, but Ciara and Ben showed up to halt it.

Chanel worried about Paulina Price (Jackée Harry) since she’d been arrested, but she was happy for Lani since Eli Grant (Lamon Archey) was awake. After Chanel decided to visit Eli at the hospital, they shared a nice moment and appreciated being sisters.

Tripp Johnson (Lucas Adams) interrupted, so that led to a conversation about how he was really holding up. After Tripp talked about the pain of Allie’s betrayal, he admitted he still loved her and expressed concern for her safety.