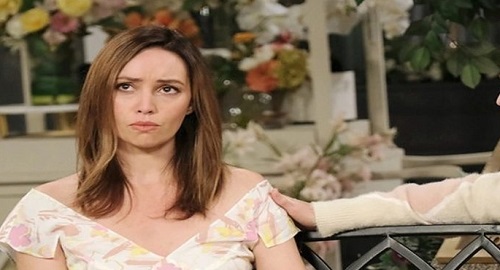 Days of Our Lives (DOOL) spoilers tease that Gwen Rizczech (Emily O’Brien) will face a medical emergency, so she’ll be hospitalized after grave danger strikes. Here’s what Days fans can expect as Gwen lands in some trouble on DOOL.

During the week of September 19-23, Gwen will put her animosity aside and help Leo Stark (Greg Rikaart) figure out a murderer theory. Leo will really need his old bestie’s help, so Gwen will try to ignore the rage she feels over Leo’s betrayal and focus on cracking the case.

That’ll lead to Leo settling on Craig Wesley (Kevin Spirtas) as a possible answer to the whodunit. Gwen will have a hard time believing that a respected doctor like Craig would kill Abigail DiMera (Marci Miller) or plunge a knife into Sonny Kiriakis (Zach Tinker), but Leo will insist it could be true.

After Leo convinces Gwen that vengeful Craig might’ve suffered a mental break, it’ll be Gwen who alerts Rafe Hernandez (Galen Gering) to Leo’s whereabouts and gets him locked up.

That’ll partly be payback for Leo’s previous lie about Gwen’s guilt, but she’ll also just believe it’s time to put this case back in the cops’ hands.

Unfortunately, grave danger will follow, so Gwen could easily become the attacker’s final victim. It’s doubtful that Craig is the real killer, but someone else may target Gwen – like Clyde Weston (James Read) if it turns out he’s been guilty all along.

Of course, there might be another explanation for Gwen’s upcoming hospital ordeal, but the point is she’ll need urgent medical attention.

Days spoilers say Gwen’s emergency will hit during the week of September 26-30, so it won’t be long until she gets rushed to the hospital.

From there, doctors will work to help Gwen heal. If the situation is serious enough, Gwen may be in a desperate fight to survive!

One way or another, Gwen’s going to end up suffering in a hospital bed, so it’ll be interesting to see how it all plays out. We’ll bring you updates as other Days news comes in.