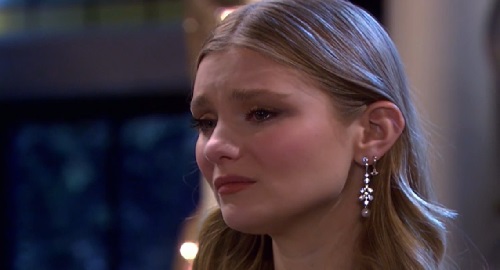 At the DiMera mansion, EJ DiMera (Dan Feuerriegel) pushed Belle Brady (Martha Madison) to be his attorney in the kidnapping trial, but she had plenty of reasons why that was a bad idea. Belle was DiMera’s corporate counsel, which made it a conflict of interest – not to mention it’d be a huge betrayal of Sami Brady (Alison Sweeney).

EJ did his best to convince Belle anyway, but she wasn’t even sure she bought his innocence and stood her ground. Upstairs, Susan Banks (Stacy Haiduk) knew Johnny DiMera (Carson Boatman) wasn’t her grandson. He was the “mean, mean, mean” devil himself – and Susan intended to end his reign of terror!

Johnny congratulated “Susie Q” on figuring it out, but he wondered what she intended to do about it. He wasn’t impressed as Susan held out her cross and rambled about how she’d fight back. Possessed Johnny threatened to turn Susan into a bug and crush her, but she wasn’t afraid of him.

That’s when the devil threatened EJ’s life again, but Susan knew he was bluffing on Tuesday’s Days episode. Susan argued that the devil couldn’t kill EJ since he needed to keep a low profile and keep causing more destruction.

Susan then realized Johnny was still after Ben and Ciara’s baby, so he suggested she was too smart for her own good. In the end, Johnny touched Susan’s forehead and wiped it clean of her devil memories. He made it so Susan simply wanted to get back home to Roger in Memphis, so she told EJ she was headed home ASAP.

At the hospital, Tripp Johnson (Lucas Adams) got updates from Paulina and Lani Price-Grant (Sal Stowers) on Johnny dumping Chanel publicly and the light fixture falling. He also found out Allie was with Chanel and vowed to call her again while they waited on the X-ray for Paulina’s ankle.

In the bedroom at Paulina’s apartment, Allie pulled back from her kiss with Chanel and said she couldn’t do this. She was sorry for what Johnny did to Chanel, but she was committed to Tripp.

After Allie rushed out of the room, she answered Tripp’s call and filled him in on Chanel’s fury and heartbreak. Allie said she just put Chanel to bed and was headed home now, so she promised to see Tripp tomorrow.

Once Allie disconnected from Tripp, Chanel appeared and begged Allie not to leave her the way her brother did. She ultimately apologized since Allie was nothing like Johnny, but she really didn’t want to be alone and asked Allie to stay as her friend.

Allie decided she would and offered to take the sofa, but Chanel thought there was plenty of room in the bed. When Allie started to get under the covers with her party dress on, Chanel wondered if she was going to sleep in that. Allie guessed not and stripped down to her underwear before joining Chanel under the sheets.

Back at the hospital, Lani addressed how she blurted out “Mom” when she told Paulina to look out for that falling chandelier. Lani told Paulina that she’d always think of Tamara Price (Marilyn McCoo) as her mom, but she suggested part of her thinks of Paulina that way, too.

Paulina shared a nice moment with Lani before learning she just had a sprain. After Tripp gave Paulina a cane to use, she told Lani she could get home through her driver.

At Paulina’s apartment again, Chanel was still crying in bed. Allie wasn’t asleep yet, so she turned over and told Chanel what an idiot Johnny was. Allie showered Chanel with compliments and thought anyone would be lucky to have her.

When Chanel asked if Allie really meant that, Allie confirmed that she did and kissed Chanel passionately. That led to things escalating – and by the time Paulina opened the door later, Allie and Chanel were in the middle of making love. They didn’t see Paulina, who closed the door just as fast and looked unnerved over what she just witnessed.

As for Johnny, he took his wedding ring off and crushed it. Johnny said “ashes to ashes, dust to dust” as he celebrated all his latest mischief and blew the now pulverized ring powder out of his hand.

At home on Tuesday’s Days episode, Ben and Ciara struggled over whether to open the life-changing contents of a manila envelope. When Shawn Brady (Brandon Beemer) arrived, he refused to help them make a “yes or no” decision without knowing the question.

Ciara and Ben admitted the baby’s gender was inside thanks to their latest sonogram appointment. They weren’t sure whether they wanted to know, but Shawn got them to acknowledge that they’d be happy with either a boy or a girl.

In the end, Ben and Ciara decided to wait on finding out whether they were having a son or daughter. They pushed Shawn to take the envelope with him so they wouldn’t be tempted to sneak a peek!