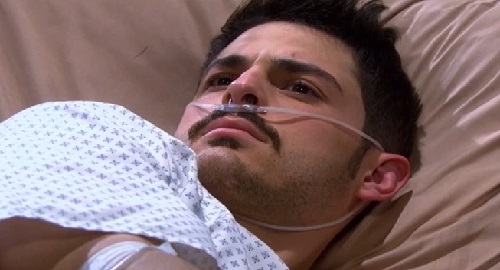 For starters, Sarah and Xander will realize they’ve got a brief window of peace. There’s nothing standing in their way now, so Xander and Sarah will decide they’d better get married before any new obstacles hit!

Problems are always just around the corner in Salem, but Sarah and Xander know they want to take the next step together. That’s why Xander and Sarah will don their wedding attire for one more attempt to tie the knot.

Thankfully, Days spoilers say Sarah and Xander will be successful this time around. Maggie Kiriakis (Suzanne Rogers) will officiate their tiny ceremony at the Horton house, where Sarah will officially become Xander’s wife.

In the meantime, Jack Deveraux (Matthew Ashford) will serve as best man and ultimately come to Gwen’s rescue. Days spoilers say Jack will make sure Gwen gets out on bail, so he’ll show faith in his daughter – especially since Sonny got stabbed while Gwen was still in lockup.

Days spoilers say Sonny will panic on Tuesday’s DOOL episode and assume Leo is there to finish him off. After Sonny insists Leo is the one who stabbed him, Leo will promise he’s innocent and argue that he only wants to talk.

Leo will beg Sonny to believe he’s being framed, so part of Sonny will realize it’d be extreme for Leo to take such deadly revenge. When another hospital employee comes in, Sonny will decide not to rat Leo out.

However, Leo will still be on his own when it comes to proving who might be setting him up. Since Sonny didn’t see the real culprit, he can’t help in that department.

Next, Sloan Petersen (Jessica Serfaty) will face Rafe Hernandez’s (Galen Gering) questions about where Leo might’ve gone. Leo was supposed to be at the motel room number he provided, so Sloan may insist she’s just as in the dark as Rafe at this point.

Nevertheless, Rafe will be determined to haul Leo into police custody and will push for Sloan’s continued cooperation. As other news comes in, we’ll bring you more updates.