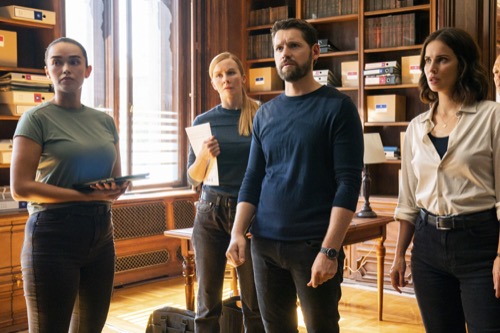 Tonight on CBS FBI: International airs with an all-new Tuesday, September 20, 2022 season 2 episode 1, “Unburdened” and we have your FBI: International recap below. In tonight’s FBI season 2 episode 1 as per the CBS synopsis, “The Fly Team and new Europol liaison Megan “Smitty” Garretson (regular series cast member Eva-Jane Willis) investigates when an American police detective on the Federal task force is murdered in Paris while looking into a U.S. company suspected of selling illegal weapons in France and the Middle East.”

In tonight’s FBI International episode, An American was brutally murdered in Paris. His death sparked an investigation. The investigation was led by Supervisory Special Agent Scott Forrester and his team. They’ve investigated American-involved crimes before. They usually get cooperation from the local police, but nothing is quite as valuable as their aid from Europol. Their last Europol liaison was promoted. She can no longer work cases with them and so they have a new person working with them. Well, not so new. Megan Garretson was an old friend of Scott’s. It’s one of the reasons she was recommended for the job. And she was needed on the new case.

The American that died was a detective. Detective Brandon Davis was murdered because he was in Paris on a joint federal task force. This task force was investigating an American weapons company that was operating from Delaware and had ties all across Europe. Everyone suspected this company of arms deals with nefarious people. They seem to be willing to sell anything for the right price. Davis as well as the rest of the task force were trying to find the dirt on them. Davis met with an informant on the day he died. Her name is Corine Desroches. Corine didn’t seem to know that he was dead when Scott and one of his agents showed up.

But she seemed unnerved when she found out that Davis had been murdered. She also seemed jumpy as Scott was interrogating her and both he and his agent noticed that Corine had a few bags already packed. They had to inform her that she couldn’t leave town until her possible involvement with Davis’s murder was fully investigated. Scott’s other agents also came across something. They went to one of the addresses in an investigation that Davis thought was important. They ran across someone who was looking for something there. They managed to run the guy off. Only he escaped in a vehicle with diplomatic plates.

Special Agents Vo and Raines reported what happened. They also continued to look into why that site was so important. They couldn’t find anything there and they later returned to headquarters to go through what else Davis thought was important. Davis seemed set on a town called Fontainebleau. They didn’t know why that town was so important until they found Davis’s apartment. His apartment was full of notes. Most of it was about something called “Dechets”. It turns out dechets were a nuclear power component that kept the lights on in Paris. And once the team figured out how dangerous it was, they moved on the town with full force.

Except they were too late. Someone had already stolen the material and could sell the dirty bomb anywhere in the world. The team wanted to take down the guy behind the company, but they found they couldn’t do so because he has diplomatic immunity. Keith Panzarasa was an American. He was also white. Which makes his diplomatic status in a Western African country all the more puzzling. It turns out the Embassy of Dondi sells its immunity status to anyone with a big enough bank account. Meaning the team couldn’t rely on their help in taking down Panzarasa. They instead had to use subterfuge.

The team hacked into the Dondi Embassy’s computer servers. They planted an email that they sent to Panzarasa demanding money or they were going to take back his immunity. Panzarasa replied to the email. Just not before he collected the radioactive material from the guys he ordered to steal the thing. Those guys were later found dead of radiation poisoning. The guys hadn’t handled the material properly. Their fate could be Panzarasa’s. something they mentioned when Panzarasa and they were able to capture him alive after a brutal fight with Scott. Scott and Kellet showed the man pictures of what happened to his friends.

It did move Panzarasa. But he still was being selfish. He didn’t want to talk until he had been given immunity and there was no way he was going to get that. Megan made him a deal. If he tells them who he sold the radioactive material to, he gets to stay in a French prison instead of an American one. Panzarasa caved. He said he gave the dirty bomb to Omar Fane. Fane was from Dondi. He was a henchman and his country was under the threat of a coup. Fane wanted to use the dirty bomb to frighten his own people into accepting the current regime.

The team later found Fane thanks to a young boy who said Fane buys candy from an outside vendor. They got their hands on the dirty bomb and they prevented it from exploding. They did so well that Scott took the time to discuss Raines’s future with said man. Raines could move up the pecking order with a desk job back in the States. He turned it down because he likes working in the field. He likes saving the day. He told Scott as much and Scott was happy to keep him on the team.

Scott also heard back from his mother and he doesn’t have to worry about that Russian that was following him. The Russian guy got sent back to Russia. His mother however reassured him that she was still alive. And that she’s okay.