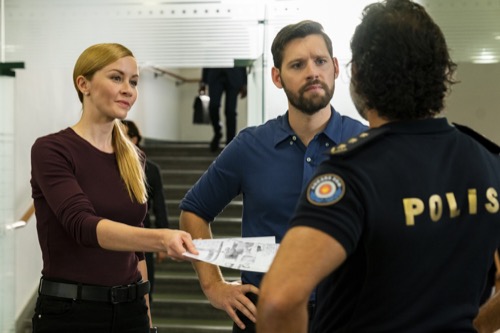 Tonight on CBS FBI: International airs with an all-new Tuesday, October 11, 2022 season 2 episode 4, “Copper Pots and Daggers” and we have your FBI: International recap below. In tonight’s FBI season 2 episode 3 as per the CBS synopsis, “When a former U.S. Marine is detained in Istanbul on a charge of smuggling antiquities, the Fly Team races against the clock to organize her release before the Turkish police learn the truth behind her visit.”

Supervisory Special Agent Forrester befriended a kid in his building. The kid had approached him one day and it seemed like he was going to ask for help, but his mother called him back into the apartment and Forrester was forced to drop it. Not that he actually did so. He instead worked on gaining the kid’s trust. Zsolt admitted that his parents have been arguing a lot. His father was currently away on a work trip. Forrester also got the father’s name. He was going to look into the guy. He also didn’t want to spook the kid with too many questions. And he was going too deep so background info dumps when he also got called into work.

An American was detained in Istanbul. The American’s name is Emily Reid. Reid was in the military. She was in turkey on a military trip that she turned into a family trip and so her partner and her daughter had been with her when she got detained. She got detained thanks to a scam. She packed her bags just fine and after being out of sight for a minute – somehow Turkish “antiques” was found in her bag. Emily got detained. Her partner, James, was asked to pay a detention fee. But he refused to do so. He instead called the American embassy because the military didn’t want to be seen dealing with this problem. And the ambassador called Forrester.

Forrester went into the situation believing he was just dealing with dirty cops. Especially as the FBI didn’t have a presence in Turkey. They weren’t wanted there. Forrester had to rely on their Europol liaison to get an invite into Turkey and even that didn’t guarantee them an office. Forrester’s team normally works out of the local police station. But they couldn’t do that this time because the guy in charge was a real pill. Dogan refused to believe his men were dirty. He wanted to hold onto Emily until he found evidence and he eventually did so. He found something buried in the wall of the apartment Emily was using while in Turkey.

Dogan realized Emily was a spy right around the same time that Forrester did. Forrester hadn’t been warned that Emily’s name was fake and that she had been in Turkey on a mission. Not even James or their daughter Zoey knew the truth. Emily’s real name is Isabel Yilmaz. She was in Turkey getting someone with inside knowledge of the Turkish nuclear plans and Emily’s people didn’t know her asset’s real name. Forrester had his people look into Emily’s life. They soon found the most likely person to be the asset and they were going to collect him, but the guy got picked up by the Turkish authorities.

It was only a matter of time before the asset broker. The team needed to get Emily out of the Turkish detention and they needed to do it fast. So, they staged a prison break. Special Agent Vo visited the prison under the guise of getting Emily to talk and she instead was buying time until her partner Special Agent Raines hacked the prison. It was up to Vo to get Emily out of that prison. She struggled to do so and if it hadn’t been for Raines then they would have gotten caught. They would have gotten caught several times. And even once they got her out, she didn’t want to go with them because she wanted to save her asset’s life.

Osman was more than just an asset. He was a friend. But he broke under custody. He confirmed that Emily was a spy and that Emily wasn’t her real name and that was it. Osman was a Turkish citizen detained by Turkish authorities. There was nothing they could do to help him. Europol Agent Megan “Smitty” Garretson was supposed to transport Emily to the helicopter that would take her to a safer country. Only they got pulled over. Smitty ran a red light. The cop was going to arrest both her and Emily again and so Smitty assaulted the guy before pulling off. Meaning they had to race out of there before Emily got put back into prison.

What followed was a car chase as well as several maneuvers, but they got Emily out of Turkey and she was reunited with her family which was stressful alone because James had been debriefed. He now knows Emily isn’t really Emily and that her whole backstory about her name was fake along with everything else she told him. And so it’s up to him whether he wants to continue to be a part of her life.