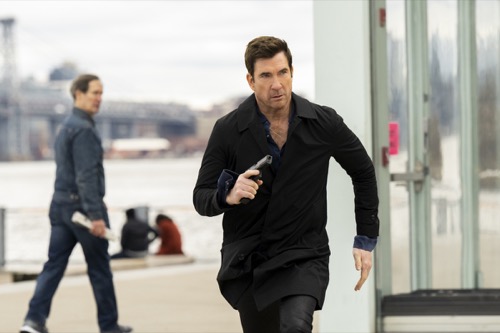 In tonight’s FBI Most Wanted episode, someone killed a mother and her two sons in a drive through window. The mother was identified as Brianna Morgan. Her sons were just little boys. They couldn’t be the target. The target had to be Morgan. She and her children were killed so brutally that the local police called in the FBI because they thought it was gang related. MS-13 have been active in the Suffolk. They’ve never made it to Massapequa. Not until now. Or at least that’s what everyone thought as they first started investigating. Special Agent Scott and his team caught this case because the shooter had made a run for it and they suspected it was connected to a missing drive through restaurant attendant.

The missing attendant was Kevin Williams. But the real Kevin Williams looked nothing like the guy that worked at the restaurant. He also had a solid alibi. The fake Kevin Williams was a white guy who looked like the real blonde blue-eyed Kevin. He didn’t seem like MS-13. Scott and his team looked into this murder. It turns out it was a copycat of a murder that took place in the 80s. the previous murder was carried out by Jackie “the fox” Bianchi. Bianchi was suspected for most of the mob hits back in the day. He was even on the Most Wanted list until he supposedly died. And so that was funny because Bianchi has a podcast now.

Bianchi wasn’t dead. He had a podcast in which he goes into detail about the murders he committed. He was free to talk about them now because he was nonextradition country and so their killer was a listener. Not a gang member. This was proven when a second crime scene repeating another infamous Bianchi kill came up and that’s when Scott brought in someone from Organized Crime Unit back in the day. His name is Terry Daniels. He’s retired, but he was willing to help out the team. Daniels listened to the podcast. He said it was the real Bianchi’s . Which was a problem because someone was listening a little too closely to the podcast.

This copycat seemed to be a man desperate to get the mob’s attention. He was a wannabe. He wanted to be in the mob so bad that he was willing to do anything. The team figured a guy like that was probably known to the mob. They asked Daniels. He reached out to an old contact. This contact gave them a name. This name led them to identifying their killer. His name is Joey Messina. He joined a construction crew by bragging he was Sicilian. He tried to get the boss to hire him. But he read the desperation coming off of Messina and he chose to fire him. Messina was recently fired. He was desperate for money. And he had a baby at home with a girlfriend.

The girlfriend was kind of getting tired of him being lazy. She was going to break up with him anyways and so learning he killed six people settled things for her. The girlfriend was a bit of a nag. The team figured she nagged Messina all the time. They also figured that Messina must be full of anger and that’s why it was so easy that he killed. But he was drawing a lot of attention by following Bianchi’s kills. He was also involving civilians. Something the mob would never do. Messina was drawing attention to the families and so they wanted him gone just as much as the FBI. And that’s why they were cooperating.

They had no clue where Messina is. They also didn’t know where Bianchi is. The team spoke to Bianchi’s wife Dolce and she firmly believes her husband is dead. The man left her with a small baby. If he is still alive, she wants all the back child support she could get. But someone on the team picked up something that Dolce did. She put soy sauce in her marinara. She said she got the idea from Bianchi and that he used to say that if they got pasta from the Asians then a little soy sauce would help complete the dish. Ortiz remembered that from a YouTube video. The video suggested putting soy sauce in the marinara because they got the idea of pasta from the Asians.

That was something Bianchi came up. There was no faces in this video and so Daniels was able to identify the male figure as Bianchi due to the scar on his hand. It turns out that Bianchi really was alive. He was living in Las Vegas with his much younger girlfriend. And they do videos. He has his podcasts and she has her cooking videos. The team flew to Las Vegas and they were later able to arrest Bianchi. Bianchi is the person who led them to Messina. Messina had been writing his idol. He wanted tips. He bragged about his kills. Bianchi was even writing back and congratulating him for all that he did.

The team convinced Bianchi to help them catch Messina. Bianchi agreed to do it but they he tried to pull out of it and so they were forced to arrest him and go running after Messina who got tipped off. Messina tried to make one last stand. He instead was shot and killed and so it was just Bianchi that was going to jail.