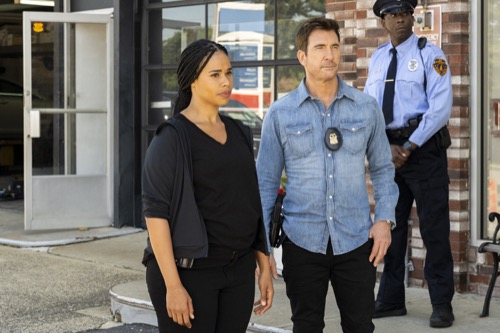 Tonight on CBS FBI Most Wanted airs with an all-new Tuesday, October 18, 2022 season 4 episode 5, “Chains,” and we have your FBI Most Wanted recap below. In tonight’s FBI Most Wanted season 4 episode 5 as per the CBS synopsis, “After Hana is kidnapped while trying to help a young girl (guest star Dalya Knapp, EVIL) in peril at a rest stop that’s on the way to her sister’s house in Connecticut, Remy and the team pull out all the stops to find her.”

In tonight’s FBI most wanted episode, FBI Special Agent Hana Gibson has gotten a new roommate. She used to team up with Crosby and then he got hurt on the job and went back home. Her new roommate was also an agent. It was the new guy Cannon. Cannon had barely moved in before Hana was leaving him to visit her family. Her sister in particular. The sister lived out of state. Hana was driving there instead of flying there. She was on the road for a couple of hours when she felt the need to use the restroom and stopped at one of those rest stops. Hana ended up meeting a young girl in there. The girl had bruises on her. Hana became concerned and tried asking the mother.

The mother refused to talk to her. Not that Hana took the hint. She was following them to the car when she got hit from behind and later woke up tied up in the backseat of a car. Hana overheard the supposed mother talking to her partner. They were going to drug Hana, pimp her out, and eventually kill her once they could no longer use her. Hana overheard all of this. She also heard that they didn’t care she was an FBI Agent. They found her badge and chose to ignore it. They figured they wouldn’t get caught. They failed to realize that Hana was expected somewhere. Her sister called Scott when Hana never made it to her house.

The sister knew that not showing up wasn’t like Hana. Hana would have called if she was running late. So, the sister called Scott. She told him that her sister was missing and he called it the rest of the team in. They went looking for Hana. They eventually found her car at the rest stop. They also found her phone all busted up. Someone had thrown it into the ditch. Which told the team that Hana didn’t just go missing. She was taken. The team found evidence in the trash can of a child’s happy meal and they checked the nearby restaurant. The guy had paid with a card. His name was Brad Piero Wallace. He’s the one that grabbed Hana.

The team also realized that he’s been driving all over the eastern seaboard. They just didn’t know why. But Hana did. Hana realized the young girl that was traveling with the couple was their daughter. Her name is Ollie. Ollie was a victim. Her parents have been pimping her out to pedophiles all over the place and it’s been going on for years. The house they took Hana to – it belonged to one of Ollie’s “clients”. He had a whole room that was catered to a young girl. It also has restraints connected to the floor so that Ollie couldn’t escape. They used those restraints on Hana while she was there. Hana didn’t try to fight at first. She didn’t fight until she saw them come in the room with cameras and told Ollie to get ready.

Hana tried to fight. They drugged her and moved her out of the room so that she couldn’t. Hana didn’t see Ollie again until it was all over. The poor little girl had been quiet at first. She was hoping that if she stayed being nice that the monsters wouldn’t hurt her anymore. Over with the team, they realized what kind of man Wallace was when they raided his house. The local FBI Agents there had found a bunch of child porn. It was videos he had made of his daughter’s Ollie and he shared it with others. But Wallace’s female accomplice was his second wife. Ollie’s stepmother. Her birthmother was Elyse.

Elyse lost custody in the divorce because she’s a drug addict while Wallace had a job. Wallace has kept Elyse away from Ollie ever since and so she didn’t know they were abusing her baby. She didn’t know until Scott showed her footage of it. Elyse has gotten clean. She was saving up for a lawyer when the FBI called. Now, she knows that she needs to get Ollie as far away from her father as fast as possible. The FBI were tracking down Wallace’s buddies. They found Wallace was giving his daughter to his old boss. They tracked down the many Uncle Dougie’s addresses and they sent local agents to each address.

Scott and his team went to the nearby address. They were pulling up on the land right around the time that Hana was breaking out with Ollie and a newborn baby they found. Hana used her skills to get out of the locked room. She then skillful got them downstairs where they overheard the baby crying and realized they couldn’t leave a baby with these monsters. They took the baby. Done so with some force because Wallace’s wife tried to fight back. Then they went on the run. They were trying to make it up the road where unfortunately Wallace caught up to them. But that’s when the FBI arrived. Wallace was arrested. The guy that chased after Ollie was arrested. And Uncle Dougie was arrested.

All the pedophiles went down. Ollie was later reunited with her mother and she finally got medical treatment for all the abuse. And she got to hear from Hana how Hana was able to overcome her own abuse.