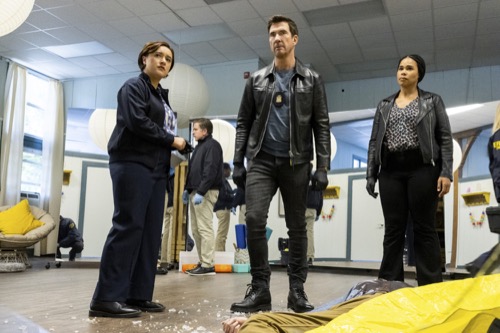 In tonight’s FBI: Most Wanted episode, a wealthy businessman was attacked outside of a rave. The businessman was Alan Mitchell. He was attacked, he was drugged, and then he was kidnapped. He was taken across state lines back to his house. It was there he was repeatedly stabbed to death. But nothing was stolen from his house. He was drugged with a special drug known as the “zombie drug” because it renders everyone unusually compliant and it’s how Mitchell opened his own safe before his killer destroyed everything inside. His killer was seen taking Mitchell from the rave. He took a car that traced back to the Psychedelic Wilderness school. And they were the ones that identified the killer from surveillance video.

The killer’s name was Jake Cooley. He didn’t have enough money to afford school and so he did odd jobs to help pay for his tuition. It’s how he had access to one of their vans. The same van he used in the crime. Jake attended school because he was mentally troubled. The school was all about using drugs to make peace with yourself. Jake could use all the help you could get. His mother killed herself when he was young and he hasn’t really been in much contact with the only family member he has left, his half-sister. But she did say that Jake was sweet at heart. So, how did a good kid go on to commit murder?

Supervisory Special Agent Scott and his team were put in charge of the manhunt. They went looking for Jake. They searched his home and they realized he built an altar where he took his drugs. There was a picture of Mitchell with his eyes scratched out on that little altar. Jake clearly killed Mitchell for a purpose. He would go on to murder Leon McCann as well. Leon McCann was connected to the school. He did work around there. It was his wife who ran the place. His wife Becca was later questioned and she mentioned that Jake was really troubled. Jake has treatment-resistant depression. It’s why he came to her school for alternative medicine.

Becca said she tried to help Jake, but she didn’t know why he would kill her husband. They weren’t having an affair. She told the team that Jake sees her as a mother figure. The team then looked into her husband’s final hours and they found out that he called someone right before he died. He called his friend. The same friend that recently bought out the school. The same friend had made a similar drug to Becca’s own mix and then the friend tells the feds that Becca wouldn’t know anything about Leon’s life because they were getting a divorce. Becca was actually being screwed in the divorce. Or at least she was until someone murdered her husband.

Becca was the reason Jake murdered two men. He almost murdered a third as well. He brutally beat up a groundskeeper at the cemetery and he stole his mother’s ashes. It was actually the anniversary of his mother’s death. It left Jake in a vulnerable position and Becca exploited that. The team went to Becca’s apartment. They found it empty however there was an altar there and they also found a drug. A drug that makes people highly susceptible. Becca was the one who wanted revenge. Becca felt her husband had given her chemical mixture to his college friend and thereby screwed her out of patenting her special cocktail. And getting rich.

With Becca unable to use the drugs her school runs on, she was forced to sell Magnus Karlson. Karlson got the patent and he even made a multi-million dollar deal with Mitchell to make his little company global. It’s why Mitchell was killed. It’s why Leon was killed, and it’s why Becca wanted Karlson dead. Becca had Jake go to the conference Magnus was having. She had him deliver tainted water. Once that was delivered, the two of them then escaped. Magnus was poisoned without anyone seeing Becca there and so Becca really does have a chance to pin the whole thing on Jake. And poor Jake doesn’t realize it.

It was Jake who murdered those men. It was Jake who attacked that groundskeeper. It was Jake who delivered the tainted water filled with drugs and so people getting sick was on him. The team couldn’t tie Becca to any of it. Jake was the only one who could. Becca took him to the same bridge where his mother jumped and she tried to force Jake into killing himself. But the FBI stopped her. They talked Jake out of jumping and that’s when Becca pulled her gun. She was going to kill Jake to cover up her crimes, but the feds shot and killed her, and then they got Jake off the ledge. Jake was finally going to get the help he needs.

Becca was dead and Magnus lost all the funding for his company after his board got sick on the same drug he was selling. Even if Magnus survives the overdose, his business was done.

And so Becca’s revenge was still complete.