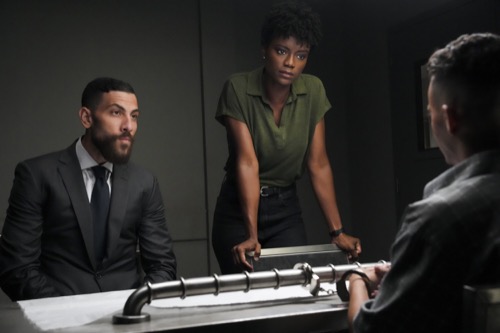 Tonight on CBS FBI  airs with an all-new Tuesday, September 20, 2022 season 5 episode 1, “Hero’s Journey,” and we have your FBI recap below. In tonight’s FBI season 5 episode 1 as per the CBS synopsis, “The team pivots when their sting operation to secure a massive bomb from an illegal broker leads them to discover that the device is already in the wrong hands.

Also, Jubal’s promise to be present at his son’s birthday party is put to the test as the case continues to heat up”

In tonight’s FBI episode, FBI Special Agent Omar Adom went in undercover as a buyer in a weapons deal. He was pretending to be a terrorist and he wanted to buy a bomb. The guy who was making the deal didn’t care about OA’s motives or how he was going to use the bomb. He just wanted to sell it. Curt Mallory also demanded that OA get into his car. Curt then drove the both of them to a warehouse where they were supposed to collect the bomb and seal the deal. But something didn’t go according to plan. Curt went into the warehouse to find his friend Anish dead and the bomb missing. Curt doesn’t know who killed his friend or who knew enough about him and the bomb to steal it.

But OA wasn’t Curt’s only buyer. Curt talked to another potential buyer that same morning. The other guy said his name was Nate and that he was eager to get his hands on a bomb. A little too eager. He made Curt suspect him. Curt thought he could be a cop and he ended the deal right then and there. Then his friend died. The bomb went missing. Curt ended up getting arrested for almost selling a bomb and so he gave as much information on Nate as he could because he wanted to lessen the charges for himself. OA and the rest of the team then went looking for Nate. Nate bought the car he used to meet Curt within days of the transaction.

The team was able to trace that car to the original owner. He said he knew Nate. Nate lived in his neighborhood. He gave the FBI the address. They went over there looking for Nate and they instead found a guy bleeding out from a gunshot wound. Nate has already killed two people to get his hands on a bomb. Before Nate’s friend died of the gunshot wound, he admitted he tried to stop Nate. He said Nate was going to kill a lot of people. The guy later died before he could say anymore. Which left the FBI in a predicament. They knew that Nate wanted to use the bomb. They knew he was an extremist by what they found in his room.

Nate seems to be an ultra leftie. He hated conservatives beyond anything normal and he’s been choosing targets amongst that group. Nate and his late roommate Tony disagreed on a lot of things. Tony thought Nate was too intense. He asked one of his neighbors to help him evict Nate and the neighbor hadn’t wanted to get involved. Something that proved helpful for him if not for Tony. Tony was wearing a waiter’s uniform when he died. The FBI reached out to Tony’s boss to see if he was catering to conservative events in the city. It turns out he was supposed to. There was a conference and a guy who supported the Supreme Court overturning abortion rights and gun rights had been the lead speaker.

The FBI couldn’t make a call to disband the conference. If they were wrong about Nate’s intended target, they would be dragged through the conservative media for months on end over their mistake. But there was a chance they could be right. Special Agent in Charge Isobel Castille put in an order to have a heavy FBI presence at the conference. She didn’t choose anything more than that until they had confirmation that Nate was heading towards the conference. Nate ditched his new car. He stole a car from another guy before driving in the direction of the conference. The team was able to use facial recognition on Nate to get his full name.

Nate was Nathan Baker. He’s been in and out of mental hospitals since he set a conservative’s house on fire. He’s stepping that up into murder now. The FBI found the car that Nate stole at the conference. Once that was confirmed, Isobel made the call to evacuate the building. The FBI was having a hard time doing so because it was a large building with people spread all throughout it. The FBI used surveillance cameras to determine where Nate took the bomb. He took it to the basement. He also started before running off. The FBI couldn’t find Nate right away, but they did find the bomb and the bomb was just a little too complicated for the bomb squad.

The bomb squad said that there wasn’t enough time to get through all the complicated parts of the bomb. They wrote it off as if it couldn’t be defused and even said to OA that it was going to go off. The bomb squad left the building because they thought the bomb was going to go off. In spite of people still being inside. They left behind OA. OA was given an order to leave the building. He chose not to because he heard there was just too many people in the building to fully clear it. Even Isobel has signed off on not being able to save everyone. And so it was just OA who decided to take a chance.

He picked up the bomb in spite of the risks. He carried to his car. He then drove the car as far away as possible before ditching and running out. OA got away before the bomb went off. But it did go off. Nate stayed around to watch it blow. The FBI spotted him and pursued him. He stole a car from someone at the event, but he also took a hostage because there was a teenage boy in that car when he stole it and they couldn’t afford to shoot him with the boy in the car. The FBI traced the car. They found it abandoned at a boatyard. Nate had holed himself up with the boy. He kept threatening to shoot the kid if he wasn’t allowed to escape.

Only the FBI couldn’t allow that to happen. Jubal got Nate talking while Stuart and Tiffany snuck behind him from the back and they got the gun out of Nate’s hands.