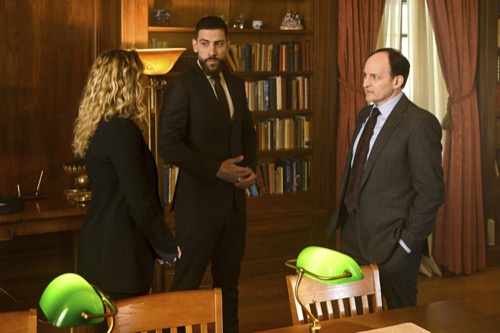 Tonight on CBS FBI  airs with an all-new Tuesday, October 4, 2022 season 5 episode 3, “Prodigal Son,” and we have your FBI recap below. In tonight’s FBI season 5 episode 3 as per the CBS synopsis, “As the team investigates a deadly robbery that garnered a cache of automatic weapons for the killers, they discover one of the culprits is a classmate of Jubal’s son, who is reluctant to cooperate with the case.”

In tonight’s FBI episode, a crew robbed a gun store. They also murdered the brother of the owner. Teddy had been working nights trying to earn some extra money and sadly it was his dream to one day open a restaurant. But that dream is now gone. Teddy was dead. Several guns and ammo were stolen. The FBI was called in because the weapons elevated this situation from a simple smash and grab. The cache of missing weapons was a federal issue. Jubal and his team caught the case. They checked on the surveillance cameras from the store and they got something. One of the guys they were looking for had kept his face covered, but his t-shirt was recognizable.

Especially to Jubal. Jubal recognized the cougar insignia as the mascot from his son’s high school, Chapman. The school was located in Scarsdale. In the same area as the gun store and the principal there took one look at the still photo from the security camera and he knew which student was involved. He said his name was Clayton. Clayton was a troubled student. His art teacher recently complained he’s been drawing darker and more violent works of art. Clayton was frankly someone you’d suspect in a school shooting. Clayton also wasn’t in school that day. He should have been. He wasn’t. The FBI went to Clayton’s house and he hid behind a door while he tried to convince them to leave. And they had to refuse.

They suspected Clayton in a robbery/homicide. They asked him to come out with his hands up. He got antsy and Clayton took his own life. He shot himself in his room with several FBI waiting outside. The FBI was later able to determine that the gun Clayton used was one of the weapons stolen during the robbery. It proved Clayton was involved. But there was a problem. The other missing weapons hadn’t been at Clayton’s house. All he had was a handgun. There were missing assault rifles at play and so the FBI suspected Clayton’s partner had them. The FBI went digging into Clayton’s life.

They talked to all of his friends. Jubal actually went off script with one of them. His son Tyler was friends with Clayton. Jubal hadn’t known. He also didn’t know that his son recently became a gamer. Jubal was a little out of touch with Tyler’s life. He didn’t even know Tyler was going by his mother’s maiden name. Jubal’s ex-wife had been complaining a lot lately that Tyler was in a crisis and that he didn’t have many friends. Tyler was apparently crying himself to sleep over it. Yet, Jubal chose to ignore this. It was only now that he was worried about his son. He was worried now because his son had been hanging out with a killer.

Jubal asked Tyler about Clayton. They met once Tyler became a gamer. He’s made friends through that community and he was better lately. Even his own mother said so. Tyler said that Clayton was weird. He also said that weren’t that good of friends. He also didn’t want to snitch on anyone else in the gamer crew. Jubal was not anywhere with him and so he went to his ex-wife. Jubal’s ex-wife confirmed Tyler’s whereabouts on the night of the murder. He was at home. He wasn’t involved in the crime and Jubal had wanted to believe he wasn’t involved in the plot either. He didn’t tell anyone else on his team about talking to Tyler.

Jubal kept his son out of the investigation. The man had wanted to believe that Tyler couldn’t be connected to this case. But Tyler’s name did keep coming up. Tyler’s name came up again once the FBI had cleared the high school and gotten the kids to safety. They had identified Clayton’s partner. His name was Zach. Zach wrote on social media about how he was going to be iconic and so the FBI knew he was still planning something. They went looking for him. Someone from the school pointed Jubal towards Tyler. Jubal confronted his son about Zach. Tyler admitted he’s good friends with the guy.

Only Tyler didn’t admit at the time that Zach had called him. He instead tried to tell his father that Zach was the only person who was genuinely nice to him and that he didn’t think he could be involved in this. But Tyler left out the call. It wasn’t until they finally checked Zach’s phone records that it showed he called Tyler and Jubal once again had to confront his son. Tyler was never completely honest with his father. He kept making excuses for Zach. He kept making excuses for himself. He said he was the cancer kid. He didn’t really have friends before he met Zach and Zach looked out for him.

Jubal heard that yet he still wanted to believe his son was innocent. It wasn’t until he tried to reach his son on his phone and couldn’t that he realized something was wrong. It turns out Tyler managed to sneak away from the house without his mother knowing. But Jubal reported it to his team. They checked the last person who called Tyler and it was a phone from one of Zach’s victims. Zach had robbed another gun store in the meantime. That time he stole bullets. He was now fully armed and was a danger to every public place. Why would Tyler agree to meet him? Why wouldn’t Tyler tell his father? Jubal had to go running after his son and he eventually caught up to him.

Tyler had been meeting with Zach. Zach saw Jubal and he freaked. He took Tyler hostage. He went on to take a whole bookstore hostage. Jubal called it in and he also didn’t wait around for permission. He went into that bookstore. He told Zach that if he wants to kill someone he should kill him and not Tyler. Zach then turned his gun on Jubal. It was his son who saved his life by pushing the gun away. Jubal was able to get to Zach and restrain him with no one getting hurt and it ultimately brought him closer to his son. They loved each other at the end of the day. And Tyler realized being friendless was better than being friends with someone like Zach.