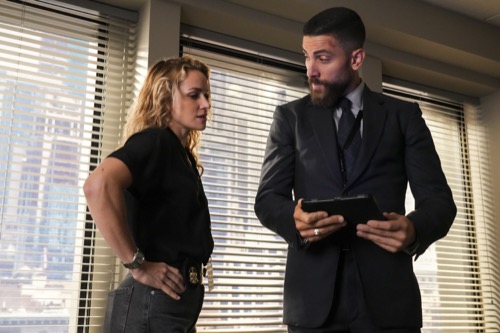 Tonight on CBS FBI  airs with an all-new Tuesday, October 11, 2022 season 5 episode 4, “Victim,” and we have your FBI recap below. In tonight’s FBI season 5 episode 4 as per the CBS synopsis, “The team investigates a series of brutal assaults while OA withholds information about his own attack and mugging from earlier that morning.

Carlos Gomez guest stars as NYPD Detective Chavez, who is tracking the perpetrators of OA’s attack.”

Tonight’s episode begins with OA, who was robbed. He was outside walking on the street when a woman called out to him for help. OA went towards her to assist her and that’s when she pulled him towards the wall so that her boyfriend could come up behind him with a gun. They stole OA’s watch as well as his wallet. They also mocked him. They told him next time someone calls for help – he should keep walking. But those two didn’t know OA was an FBI agent. An assault on him was a federal offense. He could have reported it to his bosses and they could have gone after the two people that robbed him, but OA didn’t report it. He got a call about a murder on federal property. And he went running to work.

The victim was Marta Munoz. She was young. She was in her twenties and her killer brutally raped her before strangling her to death. The means of her death seemed personal. The FBI went looking into the victim’s life for any enemies. They spoke with Marta’s mother. The mother said Marta’s last boyfriend was nice. He also moved to Texas years ago. The ex-boyfriend didn’t do this. He didn’t hate Marta. Her killer seems to have hated her. Marta’s killer came prepared to kill her. He brought along handcuffs to subdue her. The FBI was looking at someone who possibly stalked Marta and knew her routine and that’s how he knew when to target her.

The FBI later came up with a suspect. They found someone had been following Marta for a few blocks. They tracked down the guy and OA was a little aggressive with him. OA wasn’t normally the type to rough up suspects, but he was off his game. He hasn’t been the same since he was robbed. It also didn’t help that Isobel knew about the robbery. She got alerted when the cops came looking for OA. Someone saw him get robbed him and they called 911. The cops were now involved. They’ve been looking for the duo that robbed OA for months now. Those two have robbed at least five others on top of what they did to OA. And so OA was asked to help the local police with this crime.

OA turned them down. He claimed he didn’t get a good look at anyone’s face when he was robbed. He also asked Isobel to keep what happened to herself. He didn’t want anyone else to know what happened and so that’s why he was aggressive in the field. It didn’t even end with the roughing up of the suspect. That particular guy was guilty of following Marta for a few blocks only he wasn’t guilty of her murder or her rape. He was just a tad creepy. That’s all. The guy also had an alibi for both Marta’s murder and the second victim’s as well. The killer had struck again. He killed a second woman. And that was two dead in two days.

No one wanted it to get to a third day because they worried there would be another body. Isobel theorized that their killer seemed too neat. Like he’s done this before. But no one starts off with murder. They work their way up to it. The FBI looked into any stalking complaints and rapes. They found someone who claimed it was attempted rape. Her name was Citra. She was Muslim. She was young. Her parents basically stood over her the whole interview and so all Citra was willing to admit was that the guy attempted to rape her. She claims she was able to fight him off. And that wasn’t much.

The evidence also said that Citra was actually zip-tied. She was constrained. They asked about it and she wouldn’t go into detail. There was also the fact that Citra didn’t want to report it. Some neighbors who heard her screams had called it in. Citra never wanted anyone to know about her attack and she sure wasn’t going to help the FBI in catching the guy. Something that OA understood. The people that robbed him had gone on to rob another guy and they shot that guy after he tried to fight back.

Which got through to OA. By that point, he did everything possible to not label himself a victim and he just couldn’t run away from it any longer. He agreed to assist the detective. He said he’d help after he talked to a crucial witness. Which was true. OA met with Citra again. This time they talked without her parents nearby and she admitted what she was keeping back. She admitted that she had been wearing “improper” clothing. She felt ashamed and she actually thought she deserved what happened, but OA assured her that it wouldn’t have mattered what she was wearing. The guy would always have been a problem. It was about opportunity. Not clothes.

Citra admitted that she did fight the guy off. She also got his blood on her clothes. She never admitted that before now. She didn’t throw the clothes away and so she handed them over to the FBI and they got a DNA match from it. It turns out their killer was someone they spoke with earlier in the investigation. He was the guy that sold the handcuffs. It would explain why they couldn’t find anyone suspicious who purchased the handcuffs because the guy was simply taking them from his own store. It was also revealed that Marta wasn’t his first murderer. He began his spree by murdering a hooker ten days before Marta’s death. The hooker’s expertise was in bondage and restraints.

The victim was also a familiar face at the store. The hooker died during their “game”. Something that infuriated the killer. He continued to beat her after her death and so that’s when he turned towards targeting everyday women. He was about to attack his fourth victim when the FBI caught up to him. They rescued the girl and they arrested their perp.

OA also was able to identify the two people that robbed him and the detective was able to arrest them. Even though the guilt remained.