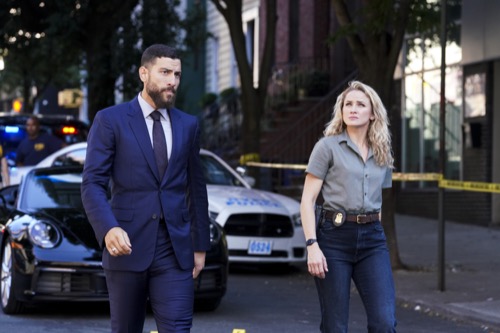 Tonight on CBS FBI  airs with an all-new Tuesday, October 18, 2022 season 5 episode 5, “Victim,” and we have your FBI recap below. In tonight’s FBI season 5 episode 4 called, “Flopped Cop,” as per the CBS synopsis, “When a wealthy accountant is gunned down for secretly testifying against a notorious drug lord, the team’s investigation leads Tiffany to ask for help from a friend who was formerly with the NYPD and is related to the dangerous crime boss.”

In tonight’s FBI episode, a businessman was gunned down in broad daylight. The victim’s name was Frank Leone. It was a hit. He was found with a ten thousand dollar watch still on him. The killers couldn’t even be bothered to rob him. They just wanted him dead. Which was going to come back to bite them. Frank’s death sparked an FBI investigation because local police couldn’t get anyone to talk to them and its because of who Frank was. Frank was a wealthy accountant. He used to work at a big firm. He left them to go independent and it seems to have worked for him. He and his family were doing well. They’ve recently began liquidating everything into cash. And they did that because Frank turned against his biggest client.

Frank became an eyewitness for the U.S. Attorney. He was helping them build a case against a notorious drug lord who went by the nickname “El Feo”. El Feo was ruthless. Frank was doing everyone a favor by assisting the government in taking him down, but El Feo realized someone talked the moment the grand jury against him convened. He’s been moving throughout organization. Killing everyone he could. He also was destroying evidence of his empire along the way. He didn’t know that Frank left behind notes. Frank was worried that something might happen to him. He gave his wife a file of everything he collected. He told her to give to the cops if anything ever happened to him.

The wife did just that when the FBI informed her of her husband’s murder. She handed over the file and they used that to connect El Feo’s operation to a seemingly harmless family woman. Her name was Margaret Saunders. The FBI didn’t know how she was connected to El Feo. They went over to her house to ask her when they found both she and her husband dead. The husband was killed quickly. She was tortured. El Feo is tying up loose ends. He was doing it with everybody. But him killing his own people didn’t shock those that knew him well. Tiffany knew El Feo’s cousin. They went to the police academy together. And have remained friends in spite of him not passing.

Ralphie even turned to her a couple of weeks ago for help. He got in trouble with an illegal gun charge. He asked Tiffany if there was anyway to make sure he didn’t go to prison and she told him there was nothing she could do at the time. Only things have since changed. Tiffany told her bosses about her friendship with Ralphie. She thought they could use Ralphie to get information on El Feo. They approved. They asked Tiffany to approach Ralphie about turning against his cousin and her partner Stuart went with her. They both got to see Ralphie. He was running his own locksmith shop. He was doing well.

But Ralphie was still angry at his cousin. He blamed El Feo for his brother’s overdose. He also didn’t think it was fair that El Feo has a mansion and he’s struggling to get by despite doing everything right. Ralphie didn’t need convincing to turn against his cousin. He’s been against him. Its why he refused to join El Feo’s organization. Ralphie was on board with the FBI and they approved him going over to his cousin’s. Ralphie later wore a wire. He went over to his cousin’s. He made jokes at his cousin’s expense. He even planted a couple of cameras. Ralphie got close enough to mirror El Feo’s electronic devices.

He did it all without getting caught. Ralphie was still bitter. Which Stuart noticed and not Tiff. But Ralphie was alive after helping them and the feds didn’t need him to make a case against the shooters. They caught one of the shooters a few blocks away on some security camera. The shooter was busying taking off his mask. They identified him as Marcus Thierre. It took them a while to track him down only they later got him. They arrested him. They used the fact that he was a new dad to get him to flip on his partner. He told them his partner was Junior Luiz. The FBI went to go arrest Luiz. They later found him dead of a forced overdose and so they had nothing to connect the hit on a protected witness to El Feo.

They were still going to arrest El Feo regardless of the flimsy evidence they had. But El Feo went on the run. He secretly left his own house without alerting anyone and the FBI tracked his car to some wooded area. They also spotted Ralphie’s car in that area. Ralphie had taken his cousin hostage. He was going to kill El Feo over what happened to his brother and Tiffany was forced to shoot her friend to stop him from killing El Feo, but El Feo then grabbed the fallen Ralphie’s gun and Stuart was forced to kill him. Both Ralphie and El Feo were now dead. They didn’t make it and that was tough on Tiffany because she knew Stuart had been right. Ralphie hadn’t been ready for this job.

And to think, Ralphie would have become a cop if he had told his superior officer who else went drinking with him on the night he got picked up for the disorderly. And so Tiffany owed her badge to Ralphie. He was loyal to the end.