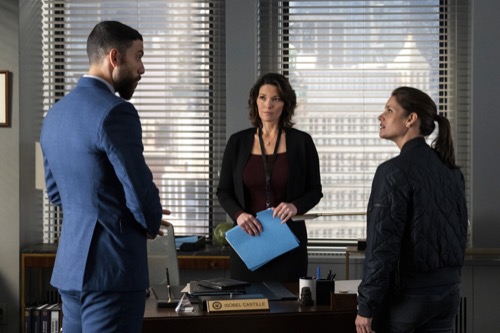 Tonight on CBS FBI  airs with an all-new Tuesday, October 18, 2022 season 5 episode 6, “Ready or Not,” and we have your FBI recap below. In tonight’s FBI season 5 episode 6 called, “Ready or Not,”as per the CBS synopsis, “Maggie returns from medical leave in time to help the team investigate two homicides: a law student on track to attend the FBI Academy and a young man with possible gang ties.

Also, an inadvertent revelation from Maggie causes OA to worry that she is rushing back into the job too quickly.”

In tonight’s FBI episode, someone murdered two people in a federal park up in the Bronx. Shot them both. Those two people didn’t even know each other. They ran into each other at the park and so there was no telling who was the intended victim. Only one of them could be it. Both victim didn’t have a record. The woman that was killed was set to graduate from law school and it had been her dream to one day join the FBI. The male victim however was a delivery guy. He has no known history of anything bad and still, the FBI believed he was the intended target because the murder gun was a known gang gun. It was wanted in connection to other murders tied to the Mott Haven Boys gang. The gang ran that neighborhood.

The local gang unit was investigating them for drug possessions as well as for murder. The FBI only caught this case because the crime happened on federal land and any crime committed on such land was automatically a federal offense. But the FBI didn’t waste time surveilling the neighborhood. They ended up going directly to the victim’s loved ones. Kiko had a girlfriend. She knew that he was selling dope on the side. They were just trying to save up enough money to afford to move to North Carolina and sadly Kiko was threatened over that little bit of drug dealing. The gang had found out what he was up to. They told him to stop moving on their turf or he’ll pay.

Now, he’s dead. The gang looks strong in front of their friends and enemies and so the FBI just needed to connect the gang directly to the murders. Kiko’s girlfriend mentioned one gangbanger threatened his life in public the other day. The FBI checked surveillance cameras in that area and they got an image of the gangster that got in Kiko’s face. He was identified as Matteo Diaz. The FBI went to his apartment. They found a gun. It actually triggered Maggie on her first day back, but she was able to push through it and she and her partner arrested Matteo. Matteo claimed he didn’t kill anyone. He said he was at home all night.

It turns out he was at an abandoned warehouse the night of the murders. Matteo was partying with his boyfriend at an underground rave and had gotten his boyfriend some drugs to share with their friends. The gang doesn’t know Matteo is gay. They have strict rules about that. The gang would kill Matteo and his boyfriend if they ever learned the truth. Meaning this was a perfect way to convince Matteo to work with the feds. Matteo agreed to help them as long as he and his boyfriend went free. Maggie promised him that she would see what she could do. She also asked him who killed Kiko and Marisol and he said it was the big boss, Jose Florial. The boss wanted to make an example out of Kiko. And Marisol was just in the wrong place at the wrong time.

Maggie wanted Matteo to wear a wire around Jose. Only Matteo couldn’t get into direct contact with Jose. Jose only deals with his captains. The gang has a hierarchy. Matteo would look suspicious if he tried going directly to the boss much less ask him about the murders and so the FBI wanted Matteo to help them capture his direct guy. Maggie was able to shake off her early discomfort. She pretended to be a club owner and she was supposed to have gotten drugs from Matteo’s guy. She played her part well. She only stumbled when it was demanded that she do drugs to prove she was one of them and so the FBI tried to intervene. It spooked the drug dealer. The guy pulled a gun. And he and Matteo wrestled over the gun until it went off.

Matteo was okay. It was Frankie that was shot. But it was a clean shoot. They weren’t in trouble. It was Frankie who pulled the gun first and Matteo was just trying to save Maggie. Maggie was able to provide assistance to Frankie. He was going to make it. He just needed to wake up after surgery and, until that happens, they still needed to get Jose. The whole thing with Frankie left both Maggie and Matteo back where they originally started. They were no closer to Jose. Or so they thought until Jose contacted Matteo. Jose demanded that Matteo bring the woman from earlier to him. Jose hadn’t known what happened exactly. He just knew a simple drug buy ended in the near death of one of his men.

Jose wanted to see Maggie because he wanted answers. Matteo was nervous about the meeting and Maggie reassured him that her people were there to step in if needed. Like they did last time. She personally felt the FBI risked things with Frankie only she didn’t tell Mateo that and she knew they spooked the man because they were worried about her. Maggie was almost killed in the field when she was last working with them. She knew that her friends and that OA were worried, but she had something to prove to herself. She had to prove that she could still do the job. Maggie went with Matteo to the meeting place. She met Jose. Jose demanded answers. She gave them to him and then Jose demanded Matteo kill Maggie.

Maggie said the magic word that had backup move in. Jose tried to flee when he heard the cops outside and Maggie pursued him. OA again got in the way. He’s been getting in the way this whole time. Only Maggie pushed him to the side and she managed to arrest Jose. Jose is going away for a long time.

Matteo and his boyfriend Sam were going to get new identities and be set up somewhere safe.

But Maggie and OA later argued about OA’s ability to trust her in the field.