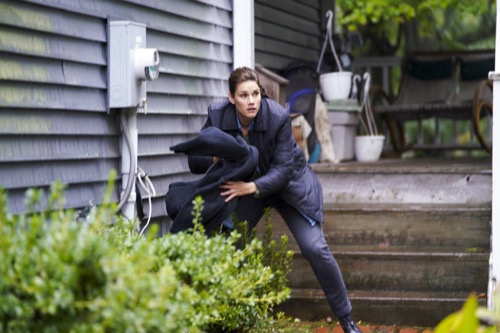 Tonight on CBS FBI  airs with an all-new Tuesday, October 18, 2022 season 5 episode 8, “Into the Fire,” and we have your FBI recap below. In tonight’s FBI season 5 episode 8 called, “Ready or Not,”as per the CBS synopsis, “When a deadly truck heist arms the killers with enough ammonium nitrate to construct a massive bomb, the team discovers a link to a terrorist group Maggie is working to infiltrate.”

In tonight’s FBI episode, An armed group of men robbed a delivery van. They also murdered the driver. The driver was Clay Parker. He worked for Great Lakes Freight and he was delivering a compound that could be found either in farming or in the making of a bomb. It was about four thousand pounds of ammonium nitrate that was stolen. It led the cops to believe that the armed group was prepared to make a large bomb that could use or something they could sell on the open market. This group has already proven they’re prepared to kill. There’s no telling what they might do next. The FBI was given this case because it involved interstate commerce. And because there was a potential bomb in play, they were one step ahead because Maggie was already undercover.

Maggie was investigating a radical group. Those guys were hoping for another revolutionary war. She was undercover as a true believer. She met some of them at the gun range. She befriended them. She was placed in a prime position when the robbery-homicide occurred and changed everything. But a simple change in direction was enough for Maggie. She found out some guy in the group was suspected of taking part in the robbery. Maggie managed to cozy up to him. She won an invite to a party at someone’s house and she wore a wire as she went over there. Maggie later searched the house for any evidence indicating they partook in the robbery-homicide.

Maggie couldn’t find anything concrete. She did however find a substance on a sleeve. She took a sample of it and it was ammonium nitrate. The same substance that was stolen. It assured Maggie that she was barking up the right tree. The sleeve belonged to Eric Ward. He has a rap sheet. He also cashed in most of his life savings for a nonreturnable trip to Canada. The FBI didn’t know if Canada was his escape plan after setting off the bomb or if he was going to be in Canada during the bomb’s explosion as a means of providing an alibi. The FBI, therefore, came up with a plan. They were going to put trackers on Eric’s car and follow him for a couple of days.

Only something went wrong when they tried to put the plan in action. Eric noticed he was being followed. He then tried to flee and so they had to announce themselves as FBI. They had to arrest him and that left them in the position of being one step behind. Arresting Eric didn’t change anything. He was denying all connections to a possible bomb. He also lawyered up. He wasn’t talking and there was nothing the FBI could do about it. They tried to see where he was going before he noticed them. It led to a warehouse being held in the woods. The warehouse was held by a shell company known as “Loyalist76”. And so they knew it was involved.

The FBI went to the warehouse. They sent off a perimeter alarm. There was a loud siren. It caused the person making the bomb to flee on a motorcycle with the bomb and so all they had left was an empty warehouse. Thankfully, it wasn’t fully empty. There were bomb components still around. It confirmed a bomb was in play and it also determined what kind of bomb was being built. It was going to be a remotely detonated bomb. Which was too high-tech for a group known as Norseman Brotherhood. Those guys were all about living in the last century. They didn’t have military experience or any kind of tech know-how. And so the bomb was built by a professional.

Someone whose done this before. The FBI checked nearby surveillance cameras and they found a picture of an actual vet that was known to the group. It was Nick Foster. He owned the gun range where the group practice their shooting. Nick has also some bomb-making skills from when he was in the military. He was known to Maggie because she knew his wife was family to Eric and his brother. She also knew he didn’t seem to care for the group because he said none of them could back up what they say. And so Nick was like that because he was a true believer who felt a bomb was the only way for the white race to reclaim their superiority.

Maggie was supposed to get close to Nick in order to get his phone. But Nick figured out she was a fed. He threatened to kill her and so she had to break cover to arrest him. Nick wasn’t helpful with their investigation. His phone on the other hand told them everything they wanted to know. They knew who had the bomb. They knew it was Eric’s brother Deke. They also knew they planned on releasing the bomb in the next hour. From then on, it was a rush to find Deke. They later found him in his car. They trapped him. He couldn’t escape. He grabbed the detonator. He threatened to release the bomb and kill everyone if he didn’t get a plane out of there.

OA wanted to tell the sniper to take that shot. Maggie thought that was too risky. Maggie instead told her bosses about another plan. She told them she could talk Deke down. It was the safer option and so her bosses signed off on it. They let Maggie talk to Deke. She spoke to him as a friend. She knew he was only doing all of this to prove himself to his brother and so she told him that he could expect a deal if no one gets hurt. Deke handed himself in. The bomb never went off and it was a great way to close the case.

But Maggie needed to have a much-needed conversation with OA. She knows she got injured on the job before and that he was worried about her, but he couldn’t keep getting in the way of her doing her job. He had to trust her. He had to trust her skillset.

Maggie just wanted their relationship to return to how it used to be.