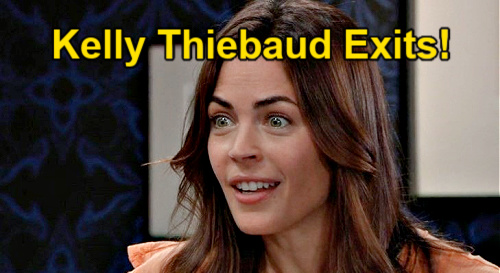 General Hospital (GH) spoilers reveal that Kelly Thiebaud is OUT at GH, so she’s set to exit as Britt Westbourne and return to primetime. Deadline confirms that Thiebaud will be reprising her role as Eva Vasquez on season six of Station 19, which kicks off starting October 6.

That also means Thiebaud will be leaving the part of Britt Westbourne behind. Thiebaud is coming off a Daytime Emmy win for Outstanding Supporting Actress in a Drama Series, so the show will be losing some serious talent.

However, most fans can agree scrapping Britt’s current romance will be no great loss.

The writers seem determined to make Britt and Cody Bell (Josh Kelly) happen, but it feels forced and borderline creepy considering how stalkerish Cody has been.

Britt deserved a better love interest and more interesting storylines during her time in Port Charles, but now Thiebaud is moving on.

It’ll be interesting to see Kelly Thiebaud back in the role of Eva Vasquez on Station 19, especially since her character has proven to be a scandalous one in the past.

Assuming GH doesn’t recast, Britt may take a job elsewhere or even take some time off to seize the day.

Ever since Britt found out about her Huntington’s disease marker, she’s struggled with the knowledge of what’s ahead.

Britt could probably use a chance to find herself and figure things out.

On the other hand, we can’t forget about Selina Wu (Lydia Look) blackmailing Britt over old crimes committed with her father, Cesar Faison (Anders Hove).

If Selina’s threat becomes a bigger factor, we can’t rule out Britt landing back in prison or going on the run again.

Regardless, Kelly Thiebaud will wrap her run on the ABC soap this November, so there’ll still be some twists and turns before Britt Westbourne’s story winds down.

Of course, Thiebaud might return to GH down the road since she’s left and come back before, so that’s worth keeping in mind.

For now, many fans will hate to see Thiebaud go, but we wish her the best of luck on Station 19!

General Hospital spoilers say Britt will face some curveballs in the not-too-distant future, so stay tuned.

CDL’s where you want to be for great General Hospital spoilers, news and updates, so stop by regularly.