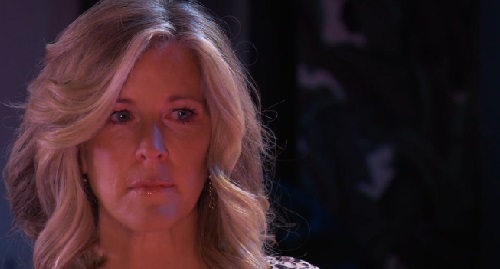 By the Metro Court pool, Trina Robinson (Tabyana Ali) pulled Rory Cabrera (Michael Blake Kruse) away from all the college talk with Josslyn Jacks (Eden McCoy) and Cameron Webber (William Lipton). Rory assured Trina he wasn’t upset by it just because he didn’t go to college himself.

Trina also wanted to discuss Spencer Cassadine (Nicholas Chavez), so she admitted his reunion with Esme Prince (Avery Kristen Pohl) was a ruse to find proof and clear her name.

After Trina explained what she learned from Ava Jerome Cassadine (Maura West), Rory wondered if the truth changed things in his own relationship with Trina. However, Trina insisted her feelings for Rory were the same and argued that Spencer still hurt her.

Spencer didn’t trust Trina enough to come clean, so she’d rather be with someone real like Rory who respected her enough to tell the truth. Soon after, Trina spoke to Joss privately about Spencer and how she was moving on.

After talk turned to dumpster-diving, Joss admitted she did it with Dex Heller (Evan Hofer) and didn’t tell anyone. The secrecy upset Trina, who argued with Josslyn right as a curious Cam returned from getting drinks.

At the Quartermaine mansion, Drew Cain (Cameron Mathison) was frustrated since he still hadn’t heard back from Carly.

When Willow Tait (Katelyn MacMullen) appeared following a nap, Drew offered to make her some tea and knew it must be hard with all the changes her body was going through. Willow lashed out and demanded to know who told Drew.

That confused Drew since he was just talking about Willow’s pregnancy, so she blamed her outburst and confusion on pregnancy brain. Drew urged Willow to sit down since she was unsteady and vowed to get her the tea he mentioned.

In Jacksonville, Mrs. Wade Honeycutt approached Carly and eventually revealed her first name was Peyton. They chatted about Peyton’s beautification guild as it became obvious this lady was a rich snob.

Peyton talked about when the guild rezoned to tear down Ruby Anderson’s (Norma Connolly) house of ill repute, so Carly recognized the name and admitted it was her great-aunt.

That’s when it dawned on Peyton that this was Caroline Benson. Peyton was furious over Carly using the nickname Reese used and seethed over their disastrous friendship. After Peyton trashed young Caroline’s discount shoes, she suggested she didn’t see what was happening until it was too late.

Peyton accused Carly of seducing her husband, but Carly pointed out that she was only 16 and Dan was in his 40s. Carly didn’t know how to say no and was too afraid to stop Dan. Peyton still acted like Carly was responsible for heartbroken Reese’s accident since she never should’ve been driving that day.

Carly ultimately declared that she was a grown woman who didn’t owe anything to anyone – least of all Peyton. Before Peyton sauntered off, she urged Carly to get out of Jacksonville soon since she didn’t belong there and never did.

By the docks in Port Charles, Dex felt confident he could get something incriminating on Sonny Corinthos (Maurice Benard), but he needed more time. Michael Corinthos (Chad Duell) thanked Dex for helping Ava, but he warned that Dex should steer clear of Josslyn from now on.

Although Dex admitted he didn’t hate Sonny, he assured Michael that he wasn’t going soft and could still do the job. Dex felt that taking down Sonny would make up for his past mistakes.

In Ava’s room, Sonny pointed out that he knew Nikolas Cassadine (Marcus Coloma) was innocent since he couldn’t be in two places at once. After Sonny offered updates on Brando’s attack, he also revealed that Kristina Corinthos-Davis (Lexi Ainsworth) was a witness.

Once Sonny left, Ava admitted it had been unbearable thinking Nikolas might be capable of attacking her. Even so, Ava felt that Nikolas had blown up their life together by being wrong, weak and stupid. Nik acknowledged he was all those things, but he assured Ava of his love.

Nikolas also thought that when something broke, you were supposed to fix it. Ava said not always, so Nikolas wondered if she was saying there was no way back.

Nik asked if the trust was gone forever, so Ava admitted she didn’t know. After urging Ava to rest, Nikolas decided he would leave.

Brando was supposed to be in surgery for a few hours, so Sasha Gilmore (Sofia Mattsson) was concerned when TJ Ashford (Tajh Bellow) appeared so soon.

Fortunately, TJ just wanted to offer a progress report. The hook shattered one of Brando’s ribs, which affected his lung. Now the team had to retrieve every shard of bone, which would take some time.

Nina Reeves (Cynthia Watros) came to support Sasha while Sonny comforted Kristina. Jordan Ashford (Tanisha Harper) also showed up to hear Kristina’s account of what happened, so Kristina recapped how she saw what she assumed was a man attacking Brando with the hook – though she didn’t see his face.

Kristina also wasn’t sure if the attacker saw her, so Sonny worried his daughter might be in danger. Jordan didn’t see why Kristina would be a target since these appeared to be crimes of opportunity.

Gladys Corbin (Bonnie Burroughs) told Jordan that Dex was in the pub talking to Josslyn, so that led to Sonny realizing Joss left before Brando was attacked.

Back at the Quartermaine mansion, Michael found Willow and revealed he’d heard some news from Kristina. Willow was stunned to learn Brando was in surgery following an attack. Since Willow wanted to get to the hospital, Michael said he’d go with her while Drew called Carly.

At the Metro Court pool again, Rory showed up in uniform after checking in with Jordan at the hospital. Josslyn was surprised when Rory said he needed to talk to her.

After hearing about Brando’s ordeal, Josslyn explained how she followed Dex to return his sunglasses and never found him. Although Joss was sorry she couldn’t be more helpful, Rory suggested that maybe Dex saw something.

At GH, TJ approached Sasha and told her there’d been a complication. Brando’s surgery had been suspended until they could get his blood pressure stabilized – and Sasha wasn’t allowed to see him for now.

Dex showed up, so Sonny commented on his bond with Josslyn. After Sonny asked Dex to discreetly watch over Joss, Dex happily agreed.