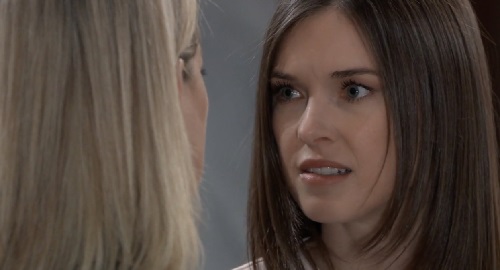 Damian Spinelli (Bradford Anderson) made a failed flirting attempt with someone before turning his attention to Austin Gatlin Holt (Roger Howarth), who was under the impression this was a fundraising event.

Although Spinelli confirmed it was, Austin still thought it looked more like a “meat market.” The doc also mentioned that Maxie Jones (Kristen Storms) had gotten stuck at work and would join him later.

Sam McCall (Kelly Monaco) felt like something was going on with Spinelli, so she kept pestering him to spill what he was hiding.

Drew Cain (Cameron Mathison) also chatted with Brook Lynn Quartermaine (Amanda Setton) since she was the one who invited him to the fundraising event.

Brook Lynn gave Drew a nudge toward looking for love, but he eventually told Britt he wasn’t much of a prowler. Britt kept downing glasses of booze and thought this was a waste of time, but Drew convinced her to stick around a little longer.

As for Dante Falconeri (Dominic Zamprogna), he gave Brook Lynn some advice regarding Chase. Although Dante felt that Chase was a patient guy, he knew people had a breaking point. Dante warned that Brook Lynn could push Chase too far and leave him unwilling to come when she called.

Meanwhile, Austin realized Chase and Brook Lynn were still doing the same old delicate dance, so he wondered if Chase wasn’t tired of that by now. Brook Lynn and Chase then approached each other in hopes of moving past their latest awkward patch.

Inside the courtroom, Willow grabbed Nina, who grabbed her right back and warned “little girl” to let go. The two of them bickered about Scott Baldwin (Kin Shriner) putting Michael on the stand and attacking him with a distorted version of the truth.

Willow wanted Nina to drop this pretense of being a loving grandmother and ranted about how the apple didn’t fall far from the tree – meaning Nelle Benson (Chloe Lanier) inherited her awful tendencies from Nina, who inherited her own from Madeline Reeves (Donna Mills).

Since Nina refused to drop her petition for visitation, Willow called attention to the heart pendants Nina wore and thought it was ironic considering she was so heartless.

Once court was back in session, Willow slammed Nina on the stand for keeping Wiley Quartermaine-Corinthos (Viron Weaver) from his grandpa by hiding Sonny Corinthos (Maurice Benard) in Nixon Falls.

Willow also mentioned the part Nina played in breaking up Sonny and Carly’s marriage – not to mention she was willing to go after Michael in court. All of that proved to Willow that Nina didn’t put Wiley’s best interests above her own.

Nina called off Scott’s cross-examination, so the judge headed back to her chambers to make her decision. Meanwhile, Carly headed for GH, picked up the DNA results and grew increasingly nervous.

Terry Randolph (Cassandra James) also convinced Chet Driscoll (Chris Van Etten) to take the job in Chicago. They toyed with the idea of trying a long-distance relationship, but Terry knew he’d be busy with work for a while.

That said, Terry assured Chet that he’d be her first call if she was free next Valentine’s Day.

Ava was surprised that Nikolas was paying attention and told Laura about it. There was talk about Nikolas’ pride and how he wasn’t working on their marriage the way Ava wanted him to.

Nevertheless, Laura reflected on the work she put into her own marriage and still felt Ava had a chance to find happiness with Nikolas again.

At Wyndemere, Esme wore a skimpy white top as part of her seduction mission. After Esme poured herself a drink, she told Nikolas that things were over with Spencer Cassadine (Nicholas Chavez) and felt she deserved better.

Esme suggested Nikolas deserved better too and felt he should find someone to put him first. After Esme acted like she was chilly, Nikolas put his coat around her and hinted that maybe she could fix things with Spencer in time.

However, Esme felt there was a deal-breaker now since the attraction was gone and Spencer refused to make love to her.

After Esme pointed out Nikolas was in the same boat, she got him to admit he wanted respect, peace and faith in a relationship. Esme hinted that she would give Nikolas those things if she were in Ava’s shoes.

Once Nikolas assured Esme that she could stay at Wyndemere, he confirmed that he wanted her – here and now. Esme urged Nikolas to prove it, so he kissed her passionately.