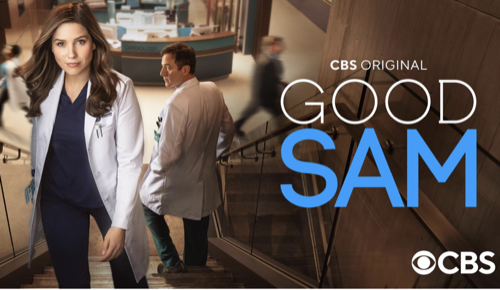 Tonight on CBS their new drama Good Sam about a gifted heart surgeon starring Sophia Bush and Jason Isaacs airs with an all-new Wednesday, January 5, 2022 episode and we have your Good Sam episode below.

On tonight’s Good Sam season 1 episode 1 called, “Pilot,” as per the CBS synopsis, “Dr. Sam Griffith takes over as the new chief of surgery after her renowned boss, Dr. Rob “Griff” Griffith, falls into a coma.”

So make sure to bookmark this spot and come back from 10 PM – 11 PM ET for our Good Sam recap. While you wait for the recap make sure to check out all our television recaps, spoilers, news & more, right here!

In tonight’s Good Sam episode, there was a reluctant patient at the Lakeshore hospital. He needed heart surgery. He was afraid of getting it and he actually tried to make a run for it before his surgery could happen. He ran off in his hospital gown. He was stopped at the door by one of his doctors.

Her name is Dr. Sam Griffith. She reassured Mr. Ferguson that he has nothing to worry about. She said he had the best surgeon working on him. The surgeon she was talking about was in fact her father Dr. Rob Griffith. He was the best cardio surgeon and he was Chief of Surgery. But he was also a jerk. He went on to perform a successful surgery on Mr. Ferguson. He also insulted each and every member of the surgical residency. And so its not surprising someone later shot him at the hospital.

Surprisingly, it wasn’t one of his residents. It was just some guy who was looking to take someone down and Griff made himself an easy target. He fell into a coma after the shooting. An interim Chief of Surgery was named. His daughter Sam was chosen as his successor and everything was going well. Sam was a great chief. She was even named as the permanent chief. Then her father woke up. He woke up from a coma after six months and he hated to find out how much had changed. He especially hated how his daughter took his place. Griff wanted to rush through physical therapy in order to get back to work as soon as possible.

His wife who also works at the hospital had refused to cover for him. She pushed him through rehabilitation and, after several months, she agreed he could return to work as long as he has a proctor supervising him. Griff chose his daughter to be his proctor. She agreed to it. She remembers that working with him was difficult and that she had been considering transferring to a different hospital before he was shot, but she’ gained in confidence since taking the lead and she thought she could handle the pressure of working with her father now. And unfortunately he had her doubting herself literally on day one.

Griff questioned everything she did. He also questioned her in front of the others. He did everything possible to chip away at her hard-earned confidence and it had taken Sam’s friends to remind her that she’s a great doctor. She helps make the other doctors better. They’ve been performing great due to her tutelage and it was coming undone by her father. Her father was a horrible resident. Although a great doctor. He truly one of the best. He spotted that one patient had lupus before the others realized it. Sam didn’t even notice the signs at first and so she ran tests to make sure that the patient did have lupus and he does.

Griff was right. He was smug about being right. He managed to make Sam doubt herself on his first day back at the office and so she was falling apart and it didn’t help that the patient still had sore on his lip that they couldn’t explain. Griff thought it was an STD. They spoke with the patient and he admitted he recently had an affair. Griff felt he was right. Sam pointed out he only knew the guy was cheating because he once cheated on her mom and so things became tense between the father and daughter. He wanted to move on to other patients. She wanted to solve the sore lip. She kept digging until she suspected something else was going on and that’s when Griff suggested a procedure.

It was an invasive procedure. Sam didn’t think it was a good at first. Griff then called for a vote and he had the entire residency team siding with him over his daughter. Sam grew frustrated. She thought no one was on her side. She agreed to the surgery, but not because of her dad, she did it because she wanted to test her theory and her theory was right. The patient had a problem with his heart. He never had lupus. Griff was wrong. Sam was right and that was enough to push her into doing more. She was able to determine that the patient contracted a virus from an insect bite on his last trip to Brazil.

It explained his symptoms. It also meant the patient needed a heart transplant. Sam was gearing up to perform surgery when she went to her best friend’s house and who also happens to be a resident, but she ran into her father. It turns out he had been sleeping with her best friend. Sam was so angry that she refused to be his proctor anymore and he couldn’t work at the hospital without one. He was removed from the surgical team. His badge was collected. He was on his way out as Sam was performing heart surgery on the patient. She ended up calling her dad for help because the new heart was too small and the old heart was too big.

Sam knew of a procedure to combine both hearts. She had her father come in because he had performed the surgery once before and so she had him talk her through it and it was a success. Sam successfully saved the patient’s life while giving him a new heart. Only she wasn’t ready to forgive her father. She had him dismissed the moment he was no longer needed. Her father hasn’t been there to support her in a long time and one day wasn’t going to suddenly change their dynamic. She didn’t trust him. She also didn’t particularly like him. And now things are the worst they’ve ever been between them.