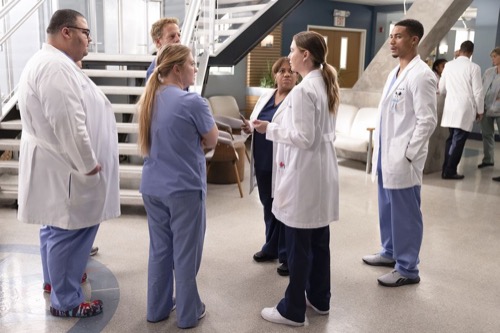 Tonight on ABC their hit drama Grey’s Anatomy returns with an all-new Thursday, March 10, 2022, season 18 episode 11 and we have your Grey’s Anatomy recap below. On tonight’s Grey’s Anatomy season 18 episode 11 called “Legacy,” as per the ABC synopsis, “While Meredith, Amelia and the team prepare for Dr. Hamilton’s long-awaited, groundbreaking surgery, Bailey receives an unexpected offer. Owen’s impatience makes him a difficult physical therapy patient, forcing Link to intervene. In Minnesota, Nick makes a liver transplant a teaching moment.”

In tonight’s Grey’s Anatomy episode, it was finally time for Meredith’s groundbreaking surgery. There wasn’t going to be an audience for it. People wanted to sit in the gallery and they were turned down because of the proprietary medicine involved. But it was going to be a good surgery.

Those one of kind ones that medical journals will be written about. Hamilton even plans on writing a book about it if its successful and he was a part of the team that solved Parkinson’s. The doctors on the case had laughed about it. They thought the book idea was a stupid one. They thought medical journals were much better and they were going to include Hamilton in theirs as Patient X.

All jokes aside, Meredith reminded Hamilton that he risked the surgery with his antics. He should just be grateful they hadn’t all walked off and she said as much to his face. Meredith, Amelia, and Kai have all put with temper tantrums. Several letdowns.

here was also a threat to pull funding and so they were doing this surgery because they didn’t want the last several months be a waste of time. Its why they brought Koracick. Koracick wasn’t exactly the type of person that people miss and so Bailey had been unhappy to see him. And she had just been in a good mood too because she recently received a job offer to go to space.

Bailey’s friend in the space program had needed a physician to go to the space. They thought of Bailey and so Bailey got excited. She thought of turning it down because she had so much on her plate. She was going through a custody battle to get custody of Pruitt Miller.

She also had to run the hospital short-staffed since people kept walking off the job and that included Richard. Richard didn’t show up for work. He instead went to Schmitt to talk to Schmitt. Schmitt was another person who refuses to return to work. He lost a patient and its eating him up inside. He had a mental breakdown.

Schmitt had scrubbed his hands until they bled. He stopped talking to people. He quit his job as well as his relationship with his boyfriend to stay in his mother’s basement playing videogames. The noises of the game help drown his late patient’s voice.

Schmitt had listened to Devon’s podcasts as he was working on Devon and he can still hear the man’s voice. It haunts him. Schmitt hadn’t wanted to talk to Richard when Richard stopped by. He hadn’t wanted to talk to anyone. He just kept playing his video game and Richard didn’t push him. Richard was still with Schmitt when Meredith convinced Hamilton to open up his surgery to the gallery.

They were already going to film it for posterity. There wasn’t going to be any harm in turning into a teachable moment for the residents and the residents had needed some cheering up. They were regulated to the easiest surgeries possibly following what happened with Schmitt.

The residents hated the baby steps. They wanted to complain to Richard and he wasn’t there and so they complained to Bailey. Bailey was dealing with that and Koracick being back – so Meredith took pity on her. She opened up the surgery. It was being shown live and it was being streamed to every television to the hospital and so it was the biggest event that hospital has had since covid hit.

During surgery, Amelia was called to come to see another patient. It was Owen. Owen was suffering some after effects of his surgery and Amelia wanted to be there for him because it was Owen. But she couldn’t leave Hamilton’s surgery. She was the brain doctor on file. FDA approval and funding was reliant on her finishing the surgery. She couldn’t hand it off to Koracick. She instead asked Koracick to perform Owen’s surgery. He agreed to it as long as he got credit in Hamilton’s surgery. this should have been the end of it. It wasn’t. Amelia kept worrying about Owen and she constantly asked about him and so Kai had had enough.

Kai said she was operating on the brain of someone she cares about. She told Amelia to get her priorities in order and Amelia went back to injecting Hamilton. Amelia finished the surgery. Afterwards, she and Kai talked. Kai said she didn’t blame her for loving so hard. She had never met anyone like Amelia and so all was forgiven on both their parts. Owen’s surgery also was successful.

That helped and not just for Amelia. Teddy felt glad too. She found out Owen’s secret and she thought it was a mental crisis and she tried to be there for Owen. She tried to understand why he would risk everything on this mission. And Owen wouldn’t take the open she gave him.

Owen was going to keep doing what he’s doing. He wasn’t going to change it and the only way to stop him would be to report him.

And Bailey’s day got worse when a resident kissed her.