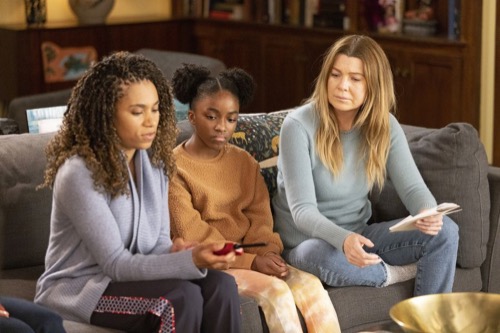 In tonight’s Grey’s Anatomy episode, Meredith’s surgery was a success. With a successful surgery behind them, the team that came up with a possible cure for Parkinson’s had also got extra funding. Funding not controlled by Hamilton for once. It was controlled by the hospital. Kai and Amelia also had to sit down to write their official reports on everything that happened.

Kai thought they should fudge what happened after the surgery was postponed. She considered Hamilton a friend and she didn’t want people to think he was hiding his symptoms or that he almost cost them the project. Amelia on the other hand had said there’s now way they could hide it. It’s the only explanation for why Hamilton had a bowel obstruction and was still cleared by his doctor for surgery.

This wasn’t the first time that Amelia found herself disagreeing with Kai. But she really likes her and so she tends to fight the back and forth thing cute. Meredith could have been the deciding factor except she wasn’t there. She was out of town. With Nick. They went to his family cabin and they were enjoying some alone time when Nick’s niece crashed the party. Charlotte came to the cabin with her new boyfriend Silver.

Silver isn’t his legal name. He changes his name everytime he feels a shift in his personality. Silver and Charlotte had met in the woods. They were micro dosing together in a workshop that Silver runs. Silver didn’t go to college like Charlotte. He prefers a school of life.

Silver also managed to convince Charlotte of this school of life. She was dropping out of college to go traveling with him and the two were heading to Costa Rica in a few months. Silver letting it slip at the cabin was the first Nick had heard of this plan. And he didn’t approve of it. He actually hated the idea because he didn’t want his niece throwing away her future on drugged out loser who couldn’t even pick a name and so he lost it. He began shouting at his niece. He asked Meredith to back him up. She refused to get involved. Nick sarcastically thanked her for her lack of help and he continued trying to talk his niece out of the biggest mistake in her life.

But it was no good. Charlotte had saved up enough money to go traveling. She didn’t want to think about what would happen if she runs out of money down there and so Nick told her what was going to happen. He said she was going to come running to him for help. Charlotte stormed off after he said that and Nick went to his own corner. Meredith later went to Nick. She told him that she used to be like Charlotte. She was the girl with pink hair who thought she had the answers to everything. Meredith eventually grew out of that phase. Which is why she thinks Nick should let Charlotte work this through on her own.

Nick was impatient about it all. He thinks that if he keeps talking to Charlotte that he could convince her to stay in school and so he reminded Meredith what was the one thing he asked for when he went into surgery. He had asked her to make sure his niece got an education. Nick’s sister was a hot mess and its in his niece’s DNA to screw things up, but Nick wanted her to at least finish school first. Finishing will give her options. Options she will need in the world if she plans on succeeding and so Nick didn’t want to back down from this. He wanted to keep fighting for his position until he manages to convince Charlotte to stay in school.

Meredith knew that wasn’t going to work. She tried to tell him so. Charlotte even said so. Charlotte was raised by Nick and he’s never had a problem with her. She’s never been arrested or taken hard drugs. She’s a good kid. Nick could see that she’s a good kid and so he eventually agreed to let Charlotte go to Costa Rica. If it doesn’t work out, he’ll be there to pick up the pieces. But there’s a chance it might work. Nick just has to have a little more faith. Nick wasn’t going to fight Charlotte over her choices anymore and he was glad that Meredith was there because she helped him put things into perspective.

Back in Seattle, Meredith’s kids found a box hidden in the house. The box belonged to Ellis. Meredith and Maggie’s mother. Inside of the box, there was a letter addressed to Maggie. The letter talks about Ellis’s life and why she eventually gave her daughter up for adoption. She also mentioned that she was given an opportunity to have an open adoption but she turned it down. Ellis apparently knew she wasn’t a good mother. Its why she thought giving Maggie was the best thing for her and she wasn’t wrong. Maggie had an amazing childhood. She also had a childhood wondering why she wasn’t good enough to be kept. And so the letter clarified a few things.