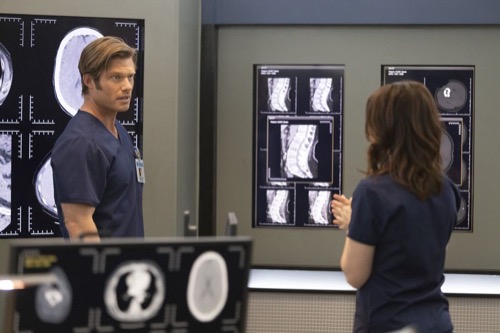 Tonight on ABC their hit drama Grey’s Anatomy returns with an all-new Thursday, February 24, 2022, season 18 episode 8 and we have your Grey’s Anatomy recap below. On tonight’s Grey’s Anatomy season 18 episode 9 called “No Time to Die,” as per the ABC synopsis, “The Grey Sloan Memorial doctors grapple with the aftermath of the car crash that involved some of their own, while Meredith works to save Dr. Hamilton’s life. After Levi is severely impacted from his latest loss, Bailey is forced to once again rethink the Webber Method. Later, Link confronts Amelia after witnessing her move on with someone new.”

In tonight’s Grey’s Anatomy episode, Owen survived the fall. He was in a car crash that resulted in his car going over a cliff and he thankfully survived the fall. The other person in the car did not. Owen was therefore alone at the bottom of a ravine injured with no one else there. Teddy and Hayes had also been involved in the accident. But they managed to climb out of the car before it went over the cliff.

He wanted to risk putting the heart in Farouk and he later convinced Maggie to go along with him. Which was great for Farouk and his family. His family was torn with being there for him and being there for Owen. Owen’s leg was at risk. There was a chance he might never walk again.

Link was one of the doctors working on Owen. It was his area and he told Teddy that he couldn’t see right away if Owen would walk again. Teddy took the information. She processed it and then she tried to be there for Owen, but Amelia noticed that Link was ignoring her and she thought it could be because Owen’s situation was worse than they thought.

Which made things uncomfortable as the two worked together on Owen. They were even doing surgeries simultaneously as a way to treat all of Owen’s injuries and so working together was tense. Yet, they powered through. Owen was also tense. He demanded to speak to Hayes.

He wanted to speak to the man alone. Owen had confessed to certain illegal things he’s done for wounded servicemen and women and he said what he did to Hayes because he thought he was doing to die and now he was worried about the repercussions of his confession seeing as he might live. Hayes told him to come clean. He said he wasn’t going to risk his license for Owen’s little project.

Owen countered how he went over a cliff for him. The least Hayes could do was reward that with his silence which was the case that Owen made and Hayes flat out said he wasn’t going to do it. Hayes said either Owen came clean or he was going to do it. Elsehwere in the hospital, Schmitt was struggling with a loss.

The first person to notice that something was wrong with him was Jo and that’s because she’s a friend. She saw that Schmitt was scrubbing his hands until they bled. She grabbed Hellmouth. She got the newbie. They did their best to talk Schmitt down and when that didn’t work they moved on to just grabbing him.

They literally pulled him from the sink. They got him medical attention and now he’ll get the help he needs to recover from losing his first patient. Both Bailey and Richard had noticed he was at the sink, but they were too busy with being angry at him for not waiting for an attendee to operate that they overlooked his mental decline.

This was failing on them. Once they saw how bad off Schmitt was, the focus should have been on him and it wasn’t. It was his friends and Nico who cared. Nico finished up with Owen surgery and he even ignored the drama brewing between Link and Amelia to focus on Schmitt.

Schmitt was taken home. Link and Amelia finally had it out and they both said things that they couldn’t walk back. But Farouk’s surgery was a success. He got his new heart and he should be doing better. Hayes went from finding out the good news about Farouk to going to Bailey’s office.

Meredith found out about it. She felt sad about losing another friend but it was okay because she met up Nick. He flew out to Seattle after hearing about Hamilton’s failed surgery. And the two were enjoying their time together.

But Link decided to rebound with Jo and he ended up doing another thing he couldn’t come back from.