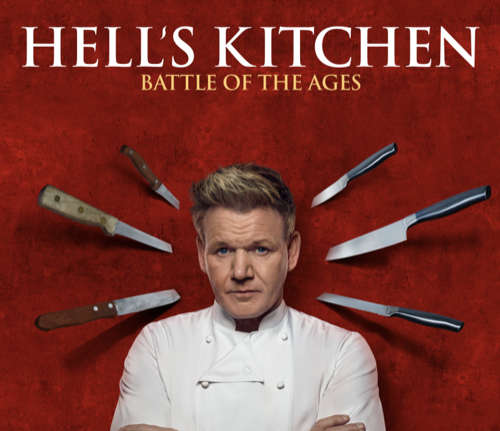 The chefs are challenged to cook their signature dish and Chef Ramsay will rate each dish on a scale of 1 to 5. The team with the most amount of points will win the challenge.”

Tonight’s episode begins with the cooks traveling by limo to Hell’s Kitchen. This is the battle of the ages and there are two teams.

Vlad looks over and sees Alyssa, they know each other from Chicago.

Chef Christina Wilson will be in charge of the red kitchen and Jason “Jay” Santos the blue kitchen.

All of a sudden, a monster truck comes crashing in, smashing Marino’s car, and Chef Gordon Ramsay is riding it.

The cooks are tasked with making their signature dish in 45 minutes, this is a team competition.

Nicole is making packaged pasta and canned tomatoes for her signature dish and there are a lot of raised eyebrows watching her.

Chef Gordon says that the winner this season will be his new head chef at the brand new Hells Kitchen Caesars, Atlantic City. It comes with a prize of a quarter of a million dollars.

Chef Gordon will assign each dish a 1 to 5, with 5 being stunning and delicious and 1 being wretched and not his standards. The team with the most points will win.

It is a tie. The best two dishes are Alex and Sakari. There is a dish that has a slight edge, Sakari’s dish. Gordon tells the 20-somethings that they are going on a 120-foot yacht and being treated to a sunset cruise. The 40-somethings are going to deal with the deliveries and clean both kitchens.

A new day dawns and the chefs arrive in the kitchen. Alex says that everyone in his bedroom snores. The blue team says the first punishment was brutal. Chef Gordon tells them about a punishment pass that they can earn. For the next challenge, they have to create an elevated chicken wing and the winner on each team will earn a punishment pass. The chef with the worst chicken wings will be going home.

To be continued next episode …..