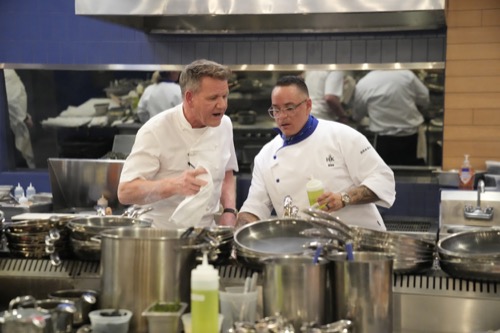 Tonight’s Hell’s Kitchen episode begins with the continuation of the second challenge, the winners will win a punishment pass and the loser will be leaving Hells Kitchen. The cooks have to make chicken wings.

Jason has chosen his top three from the blue team: Zeus, Alex, and Nicole.

The winner is Alex.

Christine has chosen her top three from the red team: Vlad, Cheyenne, and Alejandro.

The winner is Alejandro.

The punishment passes have great power and great responsibility. Alex and Alejandro have to taste the six other dishes on the teams and tell Chef Gordon which are the weakest two cooks on their team.

Billy and Dafne get to rejoin their teams. Ileana and O’Shay are in the bottom two.

Chef Gordon tells Ileana to give him her jacket and she says she thinks she should stay in Hell’s Kitchen, she has leadership skills and can do better. He thinks, then tells her that she has one more chance.

Jason and Christina start five hours of menu training. Some of the cooks are overwhelmed. A lot of them are not feeling confident about dinner service.

Time for dinner service, the blue team seemed to be very confused. Both teams prep their stations. Alyssa is partnered with Ileana and she is nervous because she was almost sent home. Chef Ramsay welcomes Matthew who will be replacing Marino the Matre’d. Hell’s Kitchen opens. Tables have been booked months in advance. Sitting at the chef’s table will be Gene Simmons from Kiss, and actor and singer, Jojo.

There is a major attitude from Ileana and Alyssa, those two are going to take the red team down.

Chef Gordon stops the blue team, the Carbonara is salty and it looks like scrambled eggs. Alex says Zeus is crumbling.

The red team is finally pushing out their appetizers, Zeus is hoping to get his third try at Carbonara approved. Appetizers are now coming out of both kitchens. Chef Gordon is trying to shout out the main course and he can’t over Ileana and Alyssa yelling at each other.

Blue team is lacking communication, Chef Gordon is frustrated and calls the blue team into the pantry. Charlene is really overwhelmed when Chef Gordon raises his voice.

Chef Gordon notices that the blue teams beef wellington is cold and the chicken is raw. He throws them out of the kitchen, tells them to go to the dorm and chooses two people who don’t belong there.

Time for the blue team to face Chef Gordon, they nominate Charlene and Billy.

Chef Gordon is about to speak and Zeus speaks up, he says he feels like he belongs in the bottom, and both Charlene and Billy want this more than he does. Chef Gordon tells him to get back in line.

Chef Gordon tells Charlene she is not ready to be his head chef and to give him her jacket.

Chef Gordon calls Zeus back to the front, he tells him that if he is willing to give his spot up that easily, he doesn’t deserve to be there. He asks for his jacket and tells him to leave.