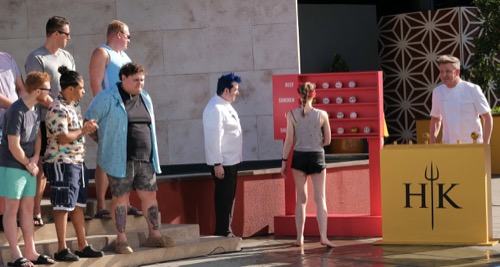 Then, each team is to create an amazing spin on four different types of sliders, containing unique ingredients found in the Water Park.”

Tonight’s Hell’s Kitchen episode begins with the continuation of the last episode where Chef Gordon got rid of the 20-something and 40-something teams, he put all the women in the red kitchen and all the men in the blue kitchen.

The next day, everyone will put on their beachwear and head outside. Chef Gordon tells them this is the start of their next challenge. Each team has to put a twist on four amazing sliders; beef, chicken, lamb, and salmon. In the pool, there are hundreds of balls with ingredients listed on them. The team that fills the 20 spots gets a five-minute head start in the cook.

The women win by three seconds but they were not strategic, they just grabbed any ingredients and put in near the proteins. The men were smarter, they chose ingredients that actually went with the proteins.

Two chefs from each team will be working with the same protein and same ingredients.

Time is running out, Billy has a fire going on the grill, and his sliders looked burnt.

Chef Gordon is only going to taste one of each dish, he makes the teams decide which ones.

To help Chef Gordon judge the sliders Chef David Myers. Chicken Sliders, Alejandro 4, and Alyssa 6. Salmon Sliders, Abe 4, and Daphne 4. Lamb Sliders, Vlad 2, and Tara 2. Beef Sliders, 5 and 1 and 1. The men on the blue team win and they are going to sunny Palm Springs, Hells Kitchen is closed for the night.

The red team has to wash, peel, cut, and fry potatoes for tomorrow’s dinner service.

The blue team has a blast on their reward trip, the return renewed and energized. While they were gone, the red team really got to see the problems with Nicole and they are worried about her not performing during the dinner service.

Time for dinner service, and hungry diners are looking at the menu.

Mindy wants to prove to the red team tonight that she deserves to be there. Her scallops get her team off on the right foot.

On the blue team, Chef Gordon gives Brett back raw sliders. Brett wonders if he just blew his shot at being Chef Gordon’s head chef.

On the red team, Chef Gordon calls the chefs to the storage room, the lamp is so raw he cannot slice through it.

The red team messes up, the salmon is burned and they run out. Chef Gordon tells the blue team to take over.

Chef Gordon sends the red team back to their dorm and tells them to choose three people to put up for elimination.

The red team nominates Alyssa for sending up raw lamb, Nicole she didn’t step up when she could have, and Mindy because she was at fish station and it went down. All three step forward.

Chef Gordon tells Nicole that she is eliminated, and she has no more passion.